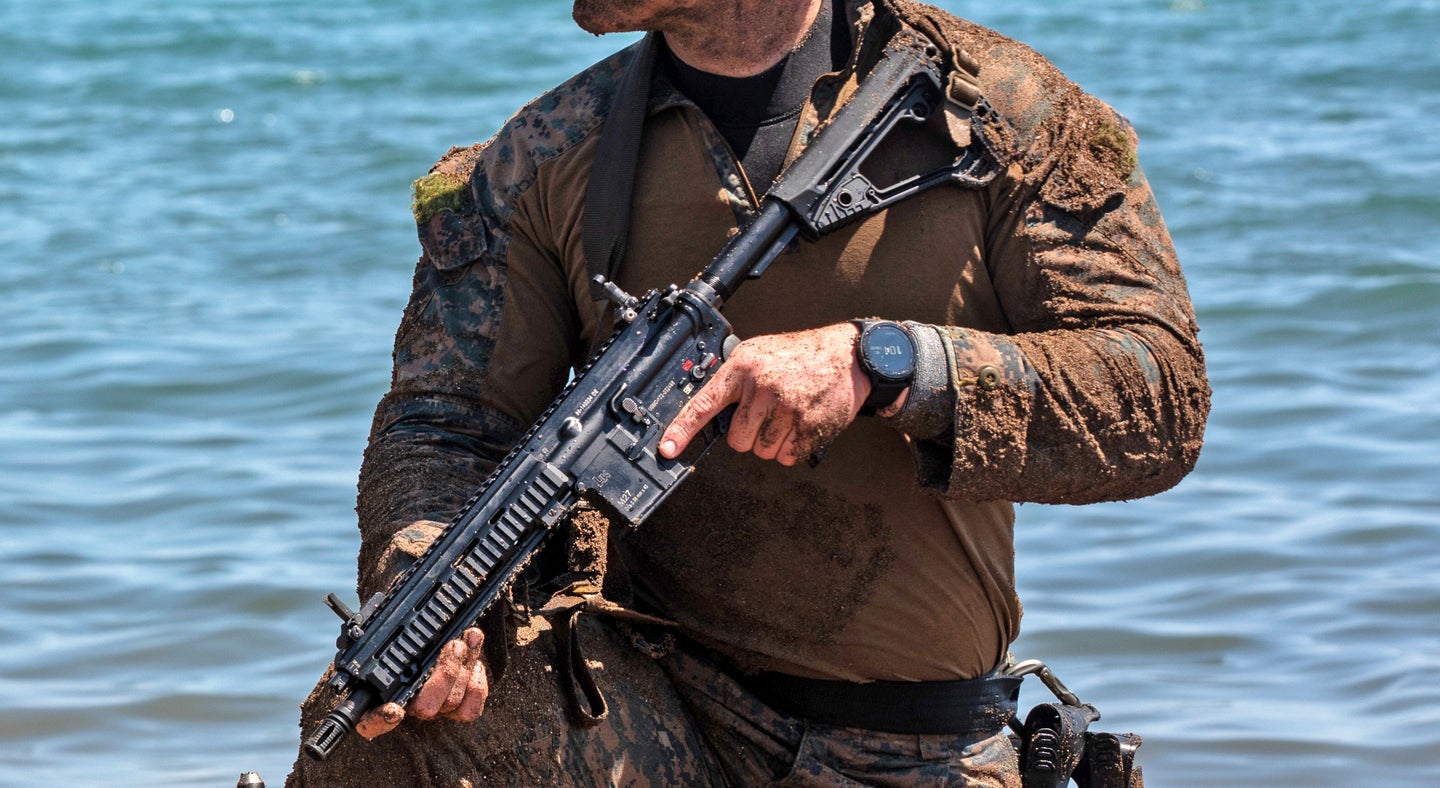 For more than a year now, U.S. Marines with the 2nd Reconnaissance Battalion have been armed in part with a new short-barrel variant of the service’s 5.56x45mm M27 Infantry Automatic Rifle. The M27 is itself a version of the widely successful Heckler & Koch HK 416 rifle, which Marines first began issuing as a substitute for the M249 Squad Automatic Weapon over a decade ago now. Since then, the Corps has pushed to expand the use of the M27 both as a more general-purpose infantry rifle and in specialized roles, such as that of a designated marksman weapon.

The 2nd Reconnaissance Battalion, part of the 2nd Marine Division at Camp Lejeune in North Carolina, first began using the short-barrel versions of the M27 in May 2021 as part of a limited user evaluation, Marine Corps Systems Command (MARCORSYSCOM) told The War Zone in a statement. The guns are issued in the form of replacement upper receiver groups, or URGs, also referred to as the Reconnaissance Weapons Kit, which are used to convert existing M27s into the more compact configuration.

The most obvious difference between standard M27s and those fitted with the Reconnaissance Weapons Kit is the shortening of the barrel from 16.5 inches down to around 10.4 inches. The new Reconnaissance Weapons Kit uppers also feature enhancements to the HK 416 series that Heckler & Koch first introduced with the improved A5 version. This includes a change to the gas system that allows it to be toggled, without special tools, between a normal setting and one intended to ensure the gun functions reliably when equipped with a suppressor.

Much like the standard M27, the Reconnaissance Weapons Kit uppers have standard accessory rails along the top, as well as on either side and the bottom of the fore-end, where users can attach optics, lasers, flashlights, and more. Examples have been seen fitted with EOTech EXPS3 holographic sights and AN/PEQ-16 flashlight/laser aiming modules, as can be seen in the picture below.

Short-barrel HK 416 versions are, of course, not new. The first U.S. military users of the HK 416 family, which included the most elite special operations units, the U.S. Army’s Delta Force and the U.S. Navy’s SEAL Team Six, notably employed compact types. Seal Team Six’s use of HK 416s during the raid that led to the death of Al Qaeda founder Osama Bin Laden was a key factor in propelling the type’s overall popularity and name recognition, including among members of the general public.

The original HK 416 and its subsequent variants, like the M27, are all derivatives of the iconic American AR-15/M16 pattern, but use a completely different method of functioning from the parent design. In a typical AR-15/M16, the gun cycles by blowing a portion of the propellant gas generated by firing a cartridge directly into the main action, a concept known as direct impingement. The HK 416 uses that gas to push a physical piston instead. This keeps the gas, and any particulate matter that might come along with it, away from the gun’s key components where it could build up, reducing the need for more intensive regular cleaning and improving overall reliability.

The shortened Marine guns are still chambered in the standard 5.56x45mm cartridge rather than one more optimized for a gun in this configuration, such as .300 Blackout. The .300 Blackout cartridge has gained some traction in the U.S. special operations forces community, with U.S. Special Operations Command now being in the process of buying Sig MCX Rattler ultra-compact personal defense weapon (PDW) sized guns that fire this round. The .300 Blackout cartridge generally comes in one of two types, one version intended to retain the general ballistic performance of the Soviet 7.62x39mm round when fired from a gun with a very short barrel, and another subsonic type specifically intended for use in guns with sound suppressors in close-quarters combat. You can read more about all of this here.

Though the Reconnaissance Weapons Kits are currently issued only on a limited basis, “there is a need for a shorter barreled URG in the reconnaissance community in order to conduct some of the specific mission sets given to that community,” a MARCORSYSCOM spokesperson told The War Zone. Short-barrel rifle-caliber guns can be useful for providing additional firepower in various close-quarters situations, including inside buildings or even on ships, and can simply be easier for personnel to maneuver with and carry in various circumstances, such as when entering or exiting vehicles or jumping out of aircraft.

The issuing of the Reconnaissance Weapons Kit-equipped M27s to the 2nd Reconnaissance Battalion comes at a time when the Marine reconnaissance community as a whole has seen new emphasis as part of the Corps’ new Force Design 2030 plans. Force Design 2030 is centered heavily on the idea of readily deployable and relatively small “stand-in” forces with significant reconnaissance and counter-reconnaissance capabilities, among other things, to help deter potential hostile action. Failing that, they are intended to be well positioned to frustrate an opponent’s battle plan. You can read more about the general Force Design 2030 concept, which also involves trimming back or eliminating heavier forces, including the total divestment of Marine M1 Abrams tanks, here.

“Our initial observations linked to A Concept for Stand-in Forces, especially for reconnaissance and counter-reconnaissance, indicate we focused … too much on lethality and not enough on sensing, the ability to make sense, maneuverability, and deception,” according to a public update the Marine Corps released in May on progress on implementing Force Design 2030. With that in mind, the document said the service is now looking at whether the core component of its new Marine Littoral Regiment formations should be an infantry battalion or a reconnaissance battalion.

“Experimentation and training over the past year demonstrates what some in the Service have known since the days of the Hunter Warrior Experiments of the late 1990s—distributable light infantry with access to organic intelligence, surveillance, and reconnaissance (ISR) and strike create advantage and extend the area of influence of every small unit,” the Force Design 2030 update added.

What exactly the Marine Corps’ final plans for issuing short-barrel Reconnaissance Weapon Kit-equipped M27s on a broader basis remains to be seen. However, the service’s reconnaissance units certainly look in line to get various new and improved capabilities in the near future as work continues to refine and implement the Force Design 2030 plans.

The post Marine Recon Units Get Short-Barrel Versions Of The H&K M27 Rifle appeared first on The Drive.