Max Verstappen is Starting to Run Away With the F1 Title 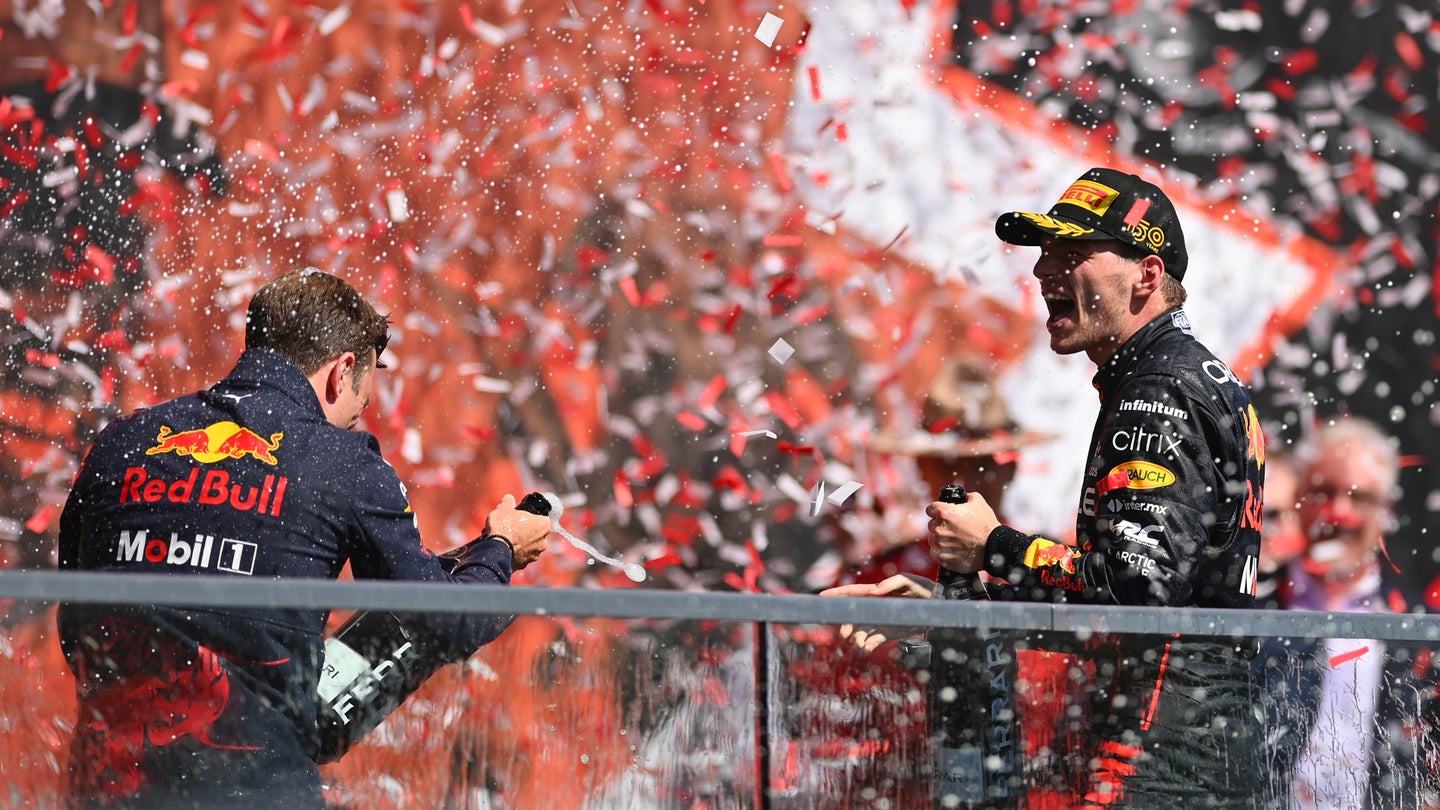 MONTREAL, QUEBEC - JUNE 19: Race winner Max Verstappen of the Netherlands and Oracle Red Bull Racing celebrates on the podium during the F1 Grand Prix of Canada at Circuit Gilles Villeneuve on June 19, 2022 in Montreal, Quebec. (Photo by Dan Mullan/Getty Images).

As Max Verstappen crossed the finish line in Montreal, winning his first-ever F1 Canadian GP, he took some of the wind out of several rivals’ sails. He was already more than twenty points ahead of his nearest competitor, teammate Sergio Perez, who unfortunately suffered a DNF due to gearbox failure, dropping him even further behind. His next closest rivals, Ferrari’s Charles Leclerc and Mercedes’ George Russell, aren’t completely out of the season-long race but Verstappen has an even more commanding lead than before, thanks outstanding performance in Montreal.

Despite Vertappen’s commanding lead, there are a several positives for team Ferrari coming out of Montreal, as Carlos Sainz took second place and had the fastest lap after a hard-fought battle with Verstappen. During the last few laps, Sainz was hot on Verstappen’s tail, pushing hard to overtake, but Verstappen was just that little bit faster and was able to hold him off. “I was pushing flat out, I wasn’t leaving any inch to the walls under braking. I tried everything to pass Max but the positive thing is we were quicker, we were faster in the race. We were very close to winning today so I’ll take the positives.” Sainz said after the race.

Sainz’s teammate Charles Leclerc, who’s had a string of bad luck over the past few weeks, started P19 after Ferrari swapped his car’s power unit for the fourth time, surpassing the three-swap limit, causing him to take a pole-position penalty. However, Leclerc was able to fight all the way back to P5, behind Mercedes’ George Russell in fourth. Being in the top five, Leclerc received ten points in the driver’s standings but he’s still nearly 50 points behind Verstappen, after having led the driver’s standings just a few weeks ago.

One of the more feel-good stories of the day was Lewis Hamilton’s comeback performance. Hamilton started the week with his best qualifying session of the season, starting P4, after Mercedes attempted to fix his porpoising issues during the short week between GPs. Hamilton publicly suffered extreme back pain last week in Baku, due to his car’s violent porpoising but he went into the Canadian GP feeling better, with a setup he was more confident in. Hamilton finished third, giving him just his second podium finish of the season. It was encouraging not only to see him perform well but to also see his car give him a chance for once. Neither Hamilton nor Mercedes are competitive in the standings at the moment but it’s good to see both the team and Hamilton getting back on the right track.

The British Grand Prix is next, in two weeks, and Vertappen’s main rivals, such as teammate Sergio Perez and Charles Leclerc will try and catch up in the driver’s standings. For now, though, it seems the Belgian-Dutch Red Bull driver has a comfortable enough lead to hold them off.

Have a tip? Send it to [email protected]

The post Max Verstappen is Starting to Run Away With the F1 Title appeared first on The Drive.