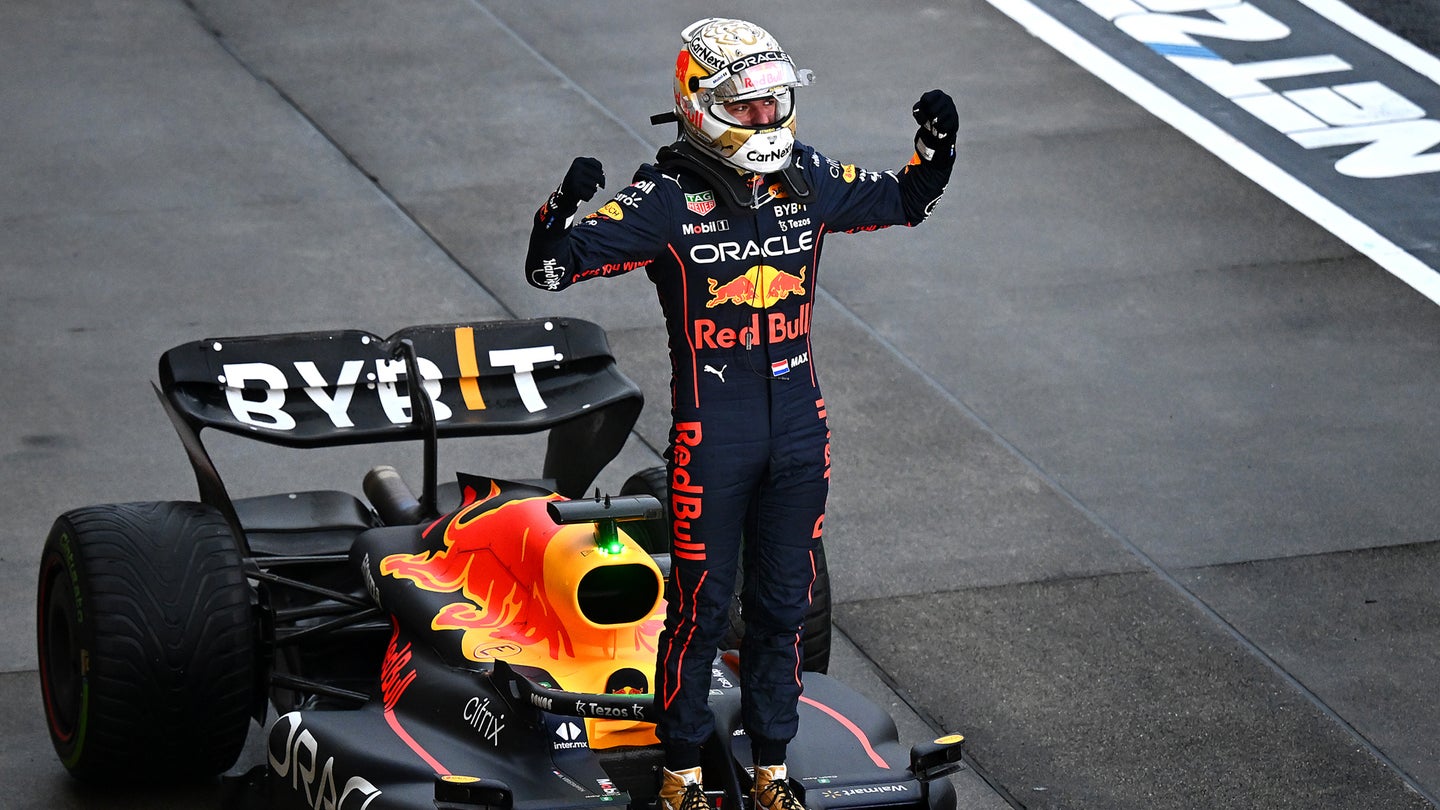 Red Bull’s Max Verstappen is the 2022 F1 world champion, winning his second F1 title in a row with an incredible performance at the rain-soaked Suzuka grand prix. There are still four more races left in the season but Verstappen now has 113 more points than the second place driver, his teammate Sergio Perez, which is enough to clinch the championship.

“Very mixed emotions. First of all winning the race, looking back now at what a year I’ve had so far, it’s been incredible. Something I could never have imagined happening after last year,” Verstappen said after the win. “I’m so thankful to everyone who has contributed to this success. The work we’ve done together with Honda all the way through, constantly improving rapidly to win, now twice, it’s very emotional. Especially with everyone here watching. It’s a little bit more pressure, but good pressure.”

There’s was actually some confusion as to whether Verstappen’s win in Suzuka would be enough to clinch the title. The race ended up being a timed race, due to a late restart after a red flag shut it down early. The rain and standing water were so bad during the original start, drivers couldn’t see ten meters in front of them. Ferrari’s Carlos Sainz even hydroplaned and crashed into a barrier, causing a safety car and then the red flag. Thankfully, he wasn’t injured

Then there was the controversy surrounding the recovery of Sainz’s car. During the red flag, a recovery tractor came onto the track, which AlphaTauri’s Piere Gasly nearly hit, as he simply couldn’t see it until he was passing it. Gasly was admittedly going too fast during the red flag but a tractor shouldn’t have been on the track in such conditions. Even at low speeds, he could have hydroplaned into the tractor, especially given the nonexistent visibility. Gasly was furious after they stopped the race, given the history at Suzuka.

In 2014, during another rain-soaked Suzuka GP, Marussia driver Jules Bianchi crashed into a tractor crane that was removing a crashed car. It was a horrific crash that ultimately led to Bianchi’s death. Naturally, every driver at today’s GP was upset over the potential danger of bringing a tractor onto the track under similar conditions.

Since the rain wasn’t letting up, it wasn’t clear if the race would restart at all after that. If the FIA had decided to cancel the race, Verstappen’s title-clinching win would have had to wait until the U.S. GP in two weeks. However, it did end up restarting, just as a timed sprint race. In the end, there were enough laps completed for drivers to be awarded full points, which is what gave Verstappen 25 points for the win and the 113 point lead over Sergio Perez to clinch the title.

Verstappen’s performance was nothing short of brilliant. By the end of the race, he was able to create an astonishing 26-second lead over the second place Charles Leclerc (Ferrari), despite the miserable conditions. With his title-clinching win at Suzuka, Verstappen has now won 12 out of 18 races this season. That means he can realistically break the record, held by both Michael Schumacher and Sebastian Vettel, of 13 wins in a season. He’ll have the chance to tie that record in Austin, Texas during the U.S. grand prix on October 23.

The post Max Verstappen is the 2022 F1 World Champion appeared first on The Drive.