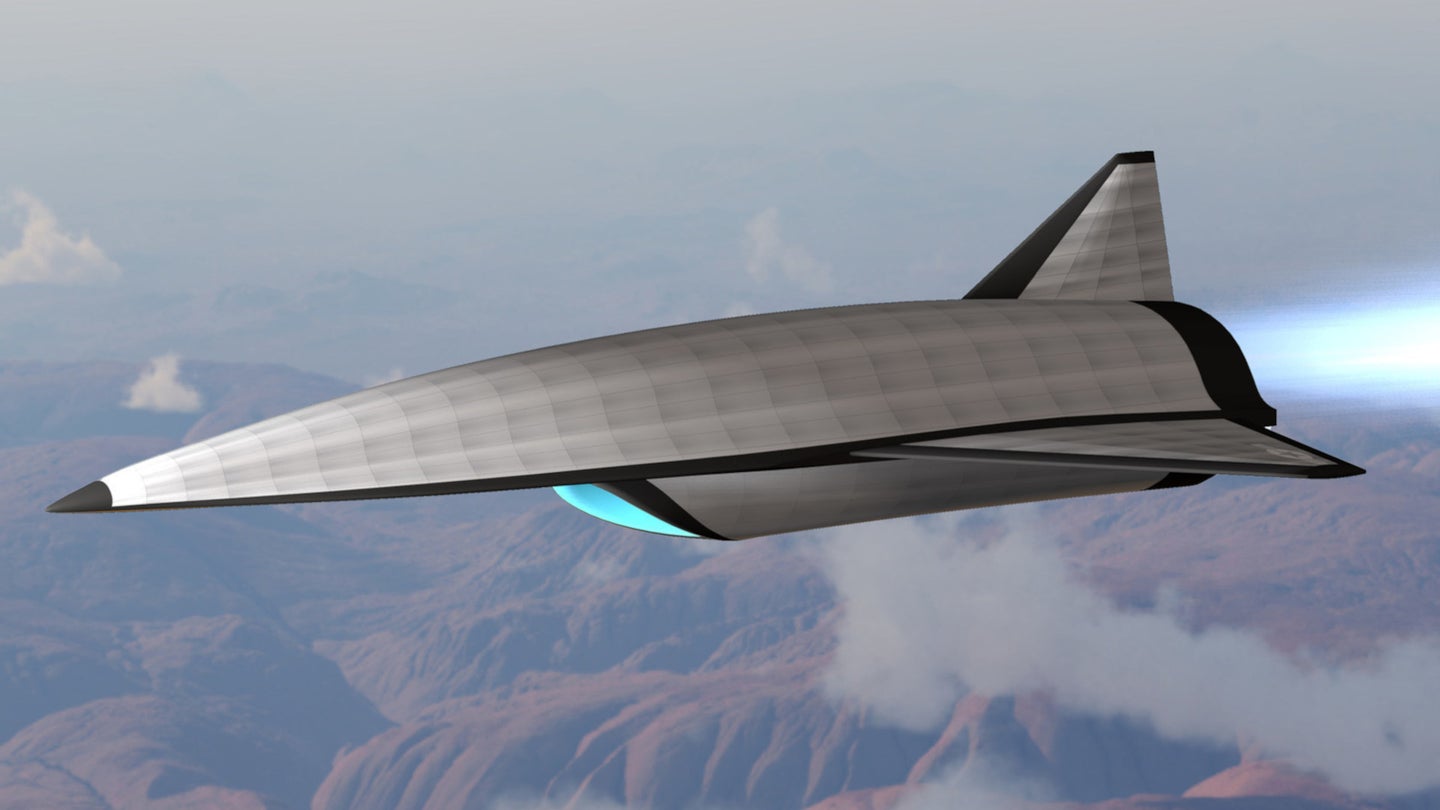 The U.S. Air Force has awarded a contract to Leidos to develop a new hypersonic air vehicle as part of its secretive Mayhem program. From the information that has been released so far, the experimental design is intended to demonstrate an ability to carry various payloads to support strike and intelligence, surveillance, and reconnaissance missions, and could lead to an operational platform.

Leidos’ new contract, which was awarded by the Air Force Research Laboratory (AFRL) is a “single award, indefinite-delivery/indefinite-quantity” deal with a $334 million ceiling, according to the Pentagon’s daily contracting notice. The first details about Mayhem emerged in 2020, which linked the program to the separate development of advanced high-speed jet engines. Last year, The War Zone was the first to report that new information had emerged confirming that both strike and ISR were among the expected mission sets for this air vehicle under what had become formally named the Hypersonic Multi-mission ISR and Strike project.

“This program is focused on delivering a larger class air-breathing hypersonic system capable of executing multiple missions with a standardized payload interface, providing a significant technological advancement and future capability,” the Pentagon’s daily contracting announcement said today. “Work will be performed at Wright-Patterson Air Force Base, Ohio, and other potential testing sites to be determined, and is expected to be completed by Oct. 15, 2028.”

“The initial task order is $24 million to conduct the System Requirements Review (SRR) and Conceptual Design Review (CoDR) in a Digital Engineering (DE) environment,” according to a separate press release from Leidos. “The Mayhem system will use a scramjet engine to generate thrust, propelling the vehicle across long distances at speeds greater than Mach 5.”

An accompanying rendering, seen below, shows what appears to be an uncrewed hypersonic air vehicle with a single engine feeding from a large air intake under the fuselage. It has a relatively long and slender overall shape to its fuselage, as well as a delta wing configuration together with a single vertical tail. This is of course only an artist’s conception and the design could change substantially over the course of the next six years.

“Leidos has assembled a team of leaders from industry and academia, including Calspan, Draper and Kratos Defense & Security Solutions, Inc., to serve as the System Design Agent (SDA). The SDA will forge partnerships between the government, industry and academia to deliver the cutting-edge research and development needed to design and prepare a production ready technical data package to produce prototypes,” according to the company’s press release. “Leidos will also lead the Model Based Systems Engineering (MBSE) and programming to help ensure Mayhem can transition from idea to operational system.”

Otherwise, details about Mayhem remain limited. The War Zone has reached out to both AFRL and Leidos for additional information.

What we do know is that, at least as of December 2021, “The system goal is to carry payloads five-times the mass and double the range of current technology capability systems,” according to a contracting notice AFRL posted online. “The standardized payload interface would create multiple opportunities for various payload integration within the same hypersonic system.”

The “current technology capability systems” that the notional Mayhem aircraft was being compared against were not defined and the document added that more specific relevant requirements for the project were classified. It also said that the expected contract ceiling at that time was $371 million, or some $37 million more than that of the contract Leidos received today.

That same document did lay out three specific desired payloads for the Mayhem vehicle, only one of which would be carried at a time, two related to the strike mission set and one for “responsive” ISR. The strike payloads were described only as “area effect” and “large unitary,” and you can read more about what those terms might refer to in The War Zone‘s previous reporting on this project.

Though Leidos’ press release only mentions a scramjet engine as the vehicle’s propulsion source, Mayhem has been tied in the past to the development of advanced high-speed engine technology, including turbine-based combined cycle (TBCC) and dual-mode ramjet designs. The general issue with ramjets and scramjets is that they do not work effectively at lower speeds, typically requiring some kind of initial boost, often provided by a rocket motor, to accelerate them to a suitable velocity first.

Therefore a practical TBCC, in particular, which would combine a scramjet with a traditional jet turbine for flight at lower speeds, is something of a holy grail when it comes to high-speed aircraft design. With engines like this, an aircraft could land and take off from existing runways using its standard jet engines, but then switch to its scramjets and reach hypersonic speeds in the middle of a flight once it reaches a speed that can sustain those engines’ operation.

It is, of course, possible that the initial experimental Mayhem vehicle design could be used as a testbed that could then lead into a more robust hypersonic aircraft with an advanced multi-mode propulsion system. It remains unclear if the air vehicles developed under this program, even initially, are intended to be expendable or not, as the Air Force has previously indicated. In the past, the service has also described the Mayhem effort as lying somewhere between an air-breathing hypersonic missile and a full-on hypersonic aircraft in the past.

“Project Mayhem says, OK, what happens — what can we do to build a much bigger system to deliver more effects at longer range?” Michael White, the Principal Director for Hypersonics in the Pentagon’s Office of the Director of Defense Research and Engineering for Modernization, said in an interview with the Center for Strategic and International Studies, a Washington, D.C.-based think tank, in 2021. “And so really, it’s looking at that kind of evolution of capability that you might get to extend out what you can achieve with a highly efficient air-breathing platform — weapon platform and take advantage of that efficiency but still extend the range to significant — significantly longer ranges than what we’re doing today.”

What other companies may have been in the running for the Mayhem contract is unclear. The Pentagon’s contracting announcement says that there were six offers, in total, and that Leidos had been selected in a competitive process, but does not name the other entrants.

As The War Zone has highlighted in the past, the Air Force’s description of Mayhem and its intended missions is entirely in line with how Lockheed Martin’s Skunk Works previously described a proposed SR-72 hypersonic aircraft. There had been a curious burst of public discussion about the notional SR-72, the name of which was a deliberate reference to the SR-71 supersonic spy plane, also developed by Skunk Works, between 2017 and 2018. This included remarks from former CEO Marillyn Hewson about the prospect of building a fighter jet-sized hypersonic aircraft demonstrator that could cost less than $1 billion, which pointed to the potential that various requisite underlying technologies, such as advanced propulsion systems, had become increasingly mature.

Talk about the SR-72 more recently re-emerged around the filming and final release of the blockbuster movie Top Gun: Maverick, which featured a fictional hypersonic aircraft called Darkstar. Though not a real design, Lockheed Martin’s Skunk Works helped design the jet and said the concept was so realistic that at least some of its features “could be more than mere fiction.”

Lockheed Martin’s original open pitching of the SR-72 to the Air Force had also prompted Boeing to publicly present a competing concept, called Valkyrie. In January of this year, the company displayed a model of a new hypersonic aircraft design, which appeared to have evolved from the Valkyrie, for still largely unclear reasons.

“We won’t speculate on future USG requirements for this technology,” Boeing told The War Zone when asked about whether this was in any way related to Mayhem.

The Air Force has previously engaged with other smaller firms working on hypersonic aircraft concepts, including the Hermeus Corporation and Exosonic as part of separate projects. In November, Hermeus announced that it had demonstrated the ability of its Chimera TBCC engine to transition from its turbojet component to its ramjet in testing on the ground. Chimera is expected to power an initial prototype aircraft called Quarterhorse, which the company plans to use to support the development of larger, more robust designs.

Now that the Air Force has awarded a formal contract for Mayhem, it will be interesting to see what additional details about the program and about Leidos’ design, which could lead to a future operational hypersonic strike and ISR aircraft, may emerge.