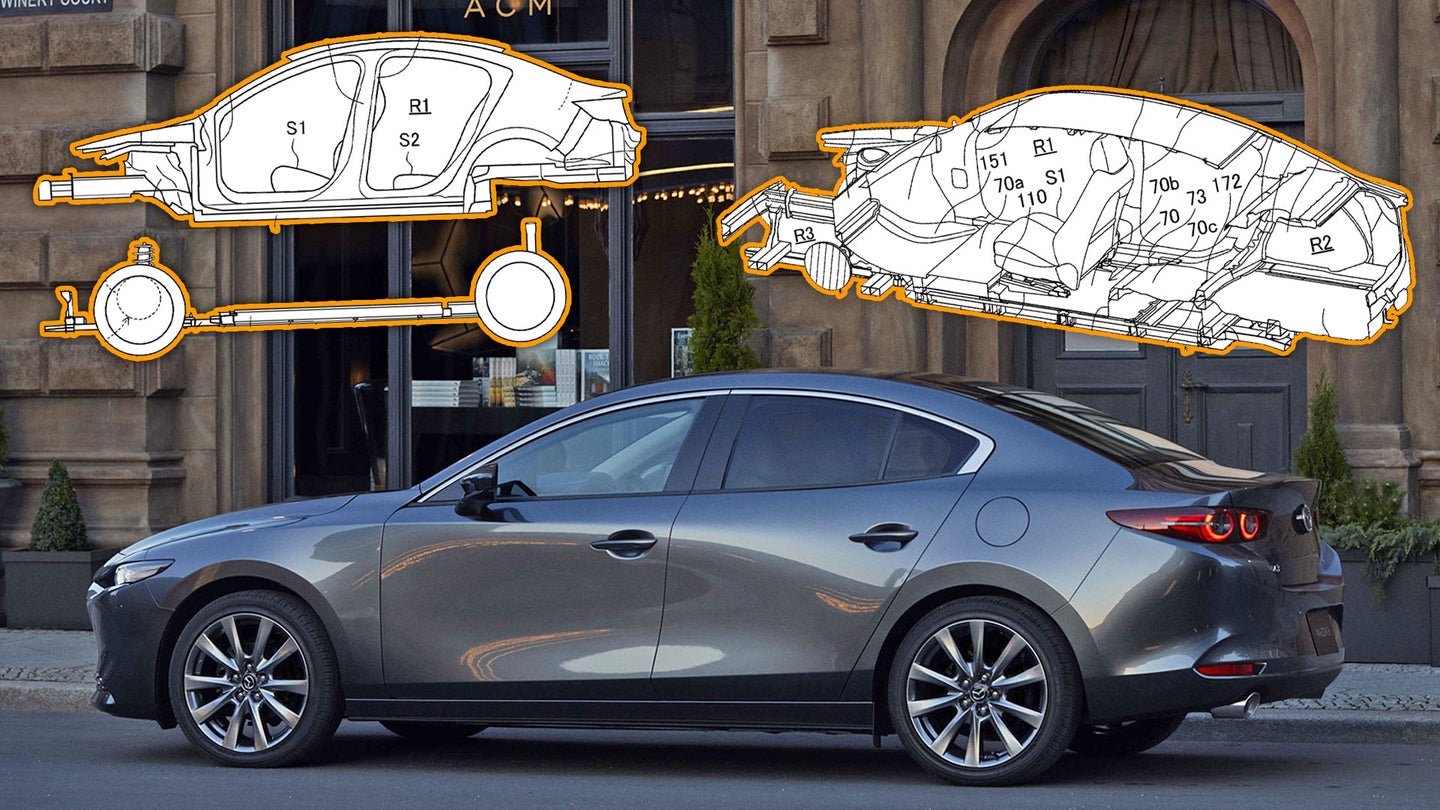 Mazda lags its competitors when it comes to electrification. It has so far offered up just one remarkably short-ranged EV for sale in the United States, the MX-30 and another is on the way after Mazda announced a plug-in hybrid CX-90 that will be unveiled in January. A new patent application from the Japanese automaker may shake things up now. It describes the body structure of a new compact electric sedan in detail, one which looks like it could replace the current Mazda 3.

The patent mostly concerns the body structure of the car as opposed to its exact specifications, which is typical. That being said, there are several interesting details related to motor placement, battery size, and more. The basic shape of the car is also pretty evident from the images presented in the application.

The most exciting component represented outside of the body itself is the battery. The patent claims it’s large enough to provide a reasonable driving range, but it’s extremely thin as far as battery packs go. The patent claims it could be a typical lithium-ion pack or perhaps a solid-state pack. The latter would be an automotive first.

For rear-wheel-drive lovers, the patent unfortunately puts the single electric drive motor at the front of the vehicle, which is not unlike the current Mazda 3 sedan and hatchback. It’s stated that this is not set in stone, though. The patent notes that the motor could be placed in the front of the car, the rear of the car, or a motor could be placed on each axle to provide all-wheel drive.

The vehicle described seats four to five people. Strictly judging by its aesthetics, it resembles the current Mazda 3 sedan pretty closely. Some of the imagery presented is only used as a placeholder, to be clear. When the automaker is defining specific structures it would like to patent, though, there’s no getting around showing the public something that the company’s engineers have been toiling away at.

This patent is not a statement of production intent. Automakers often patent things just to protect ideas. Mazda is patenting a lot of awfully interesting ideas lately, though. If I had to bet, we’re on the verge of a slow trickle of very innovative products from the Japanese brand. Whether you doubt the merit of various rumors or not, where there’s smoke, there’s usually fire.