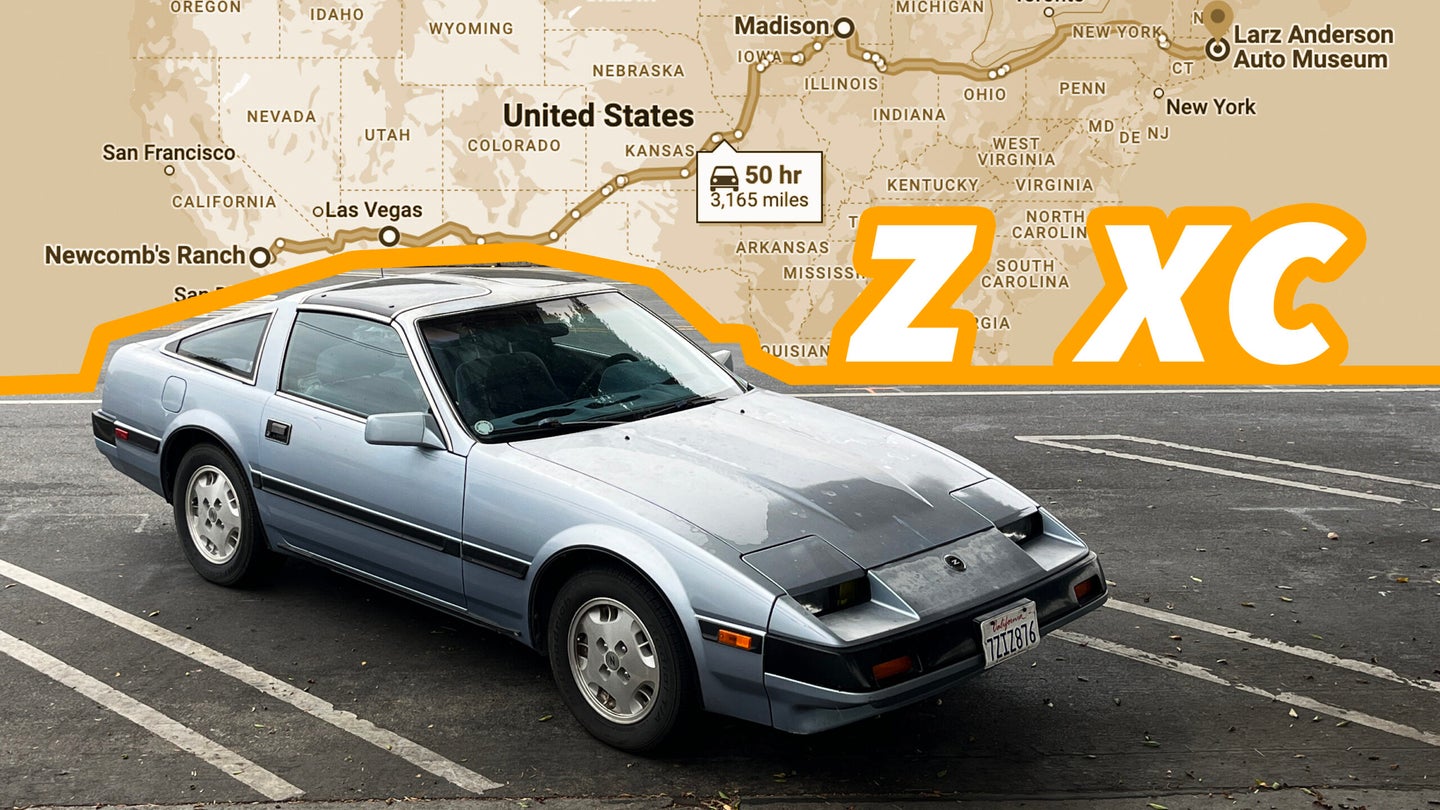 Reuniting with the car I’d abandoned a year ago brought a whirlwind of emotions. And I’m not just saying that for intro-sentence drama; I’ve got a weird spiritual attachment to this 300ZX. That’s why I convinced a friend to stash it in LA when I couldn’t bring it on a cross-country move, and why I’m now trying to prep it for a mildly foolish 3,000-mile journey after twelve months of neglect.

At the height of pandemic panic, I spent a lot of time and money reviving a 1984 Nissan 300ZX. This is the first year of the Z31 chassis—the generation of Z that most car people (even many Z fans) have largely ignored. The Z31 was just, objectively, not that great of a car in its time.

But from a car collector’s perspective in 2022, time has (finally) been good to the Z31. The design that looked hideously dated 10 years ago now stokes nostalgia pangs for the era of wedges and square lights. It looks like an eight-bit animated alligator; quintessentially 1980s. And that aesthetic has wholly ripened from “old” to “vintage.” The ’84, specifically, was badged as both a Nissan and a Datsun. It came out during the company’s transition period from its old name to the one you know it by today.

When this Z first fell into my lap, a gift from its original owner who I’d met online (a long story I’ll re-share another time) it could move and stop but needed a lot of work to be drivable with any real confidence. It wasn’t worth much money and it wasn’t a car I’d ever lusted after, so I just used it for coffee runs and the occasional open-top cruise but didn’t think about a real restoration plan too much.

My wife and I named it Mary-Ann, after the original owner who gave it to us, since her name is pin-striped on the back of the car like Sally Carrera’s tattoo.

Even without a long-term project plan I couldn’t help but tinker—fixing cracked hoses, little interior bits—the car pulled me down the rabbit hole. Each little tweak was incrementally increasing how well it drove and simultaneously deepening my relationship with it. I’m guessing many of you reading this have had similar experiences with project cars, right?

Eventually, having finished every small and easy clean-up job, I took the plunge and started investing serious sweat into this Z. Between 2017 and 2021, I gave the car a pretty comprehensive new lease on life. Highlights include:

Folks, after all that, the car floated down the road with the grace and elegance of a butterfly. I mean, it still had the pace of a caterpillar—I hadn’t done anything to motivate its VG30E engine beyond its modest 170-odd horsepower factory output. And let’s be real, at about 214,000 miles, mine is probably putting down closer to 100 HP on its best day.

But while a non-turbo Nissan VG may not exude a sense of exhilaration, it has one hell of a sense of duty. I’ll cite, again, my Z’s membership in the 200k club and the fact that it actually still ran OKish with a totally kinked fuel and air flow situation (which I’ll explain in a second). These engines were also ubiquitous. You’ll find VGs in trucks and sedans in addition to Zs. That’s a boon when it comes to restoring one of these—interior trim pieces and body panels may be rare, but engine parts are usually findable.

This Z was running cool and smooth when I left it with a friend, about one year ago exactly. When he handed back the keys after a jovial reunion, he shook his head in apology and admitted it wasn’t driving or looking as good as I might remember. Unfortunate, but I couldn’t be grumpy with him after he gave me free LA parking for a year. And, of course, it’s nobody’s fault but mine that I didn’t come back for it sooner.

Non-use killed the old battery, which I’ve replaced. The patina has, uh, progressed a bit. Air conditioning wasn’t working, but a recharge solved that. Some jerk keyed the drivers’ side.

Mechanically, the car’s hard starting and idling like Darth Vader—not imposing James Earl Jones breaths, I’m talking like, when his helmet comes off right before the Death Star pops and he turns into a blue ghost. A friend helped me look for vacuum leaks, we didn’t find any, but we did discover a clear culprit: An intake hose (between the MAF and throttle body) with an enormous gash from years of heat cycles and fatigue. No wonder the car couldn’t figure out how much gas it needed—the air intake reading would have been miles out of spec and wildly inconsistent. I haven’t had luck finding a new OEM part, but I’ve got a line on some universal intake tubing which I think should work just fine. If it somehow doesn’t, there’s always Gorilla Tape.

I’ve burned off all the old gasoline and filled the tank with a bottle of Redline injector cleaner plus 19 gallons (yeah, it’s huge) of Shell V-Power. Another friend and I replaced the old inline fuel filter, too. He even managed to recharge the AC, which I hadn’t even thought to do but will be very grateful for as I drive across Arizona.

This week, I’ll do an oil change, slap a new air filter in, and of course, deal with that cashed-out piece of intake ducting. If I were more ambitious I’d change every other fluid, too. But honestly, the brake blood, clutch juice, coolant, and trans fluid were pretty fresh when I parked the car last year and I think they’re up for a road trip.

It sucks that I had to leave the car, and it’s even more unfortunate that I didn’t come back for it in a month like I’d originally planned. And it’s a huge bummer that 11 more months went by without me tending to it, too. Mistakes were made, it is what it is, and now the mission is to get this this car running well enough (again) for a cross-country cruise that (hopefully) concludes at a classic Japanese car show in Boston.

I ruled out selling it right away—spiritual attachment and whatnot (we’ll see how long that lingers after some scorching-hot cross-desert miles). Shipping it to my garage in NY was an option, but there’s nothing I love more than a mega-mile road trip and I wasn’t about to turn down this sterling chance to do it in a kickass old car.

I also realized the timing of my trip vaguely coincides with Japanese Car Day at the Larz Anderson Automotive Museum in Brookline, Massachusetts. That’s not all that far from my NY operating base—so I’m shooting for being the furthest-traveled exhibitor at the show on Sunday, October 16 before heading back to my barn in New York.

One way or another, I’ve got to drive this 1984 300ZX from Los Angeles to New York’s Hudson Valley. I’m doing it solo, and to make matters even more logistically interesting I’m going to have to log online and work from motels en route as much as possible. Whatever happens—I’ll report back on how hard that is in case you’re thinking of doing such a thing (road tripping without taking vacation days) yourself.

My original dream was to have the car repainted at my friend’s body shop in Marina Del Rey while I hung out in LA for a bit—but those hopes were dashed when I brought the car by to see him on my third day in town. We had a long talk, went through all the car’s exterior ailments in-depth, and as you might be guessing—the amount of time and money required to re-beautify this Z’s body properly is a non-starter for me.

I’m tentatively planning on hanging out with some car nerds on Angeles Crest Highway on Friday, October 7, then swooping through some of my favorite parts of the Mojave on the way to Flagstaff, Arizona. From there, I’m looking to make an upward stroke north to visit my sister in Wisconsin. I’ll work from her place for a bit, then hopefully blast out east and get to Massachusetts by Sunday to show my crapcan car off amongst the restored jewels and treasures of Japanese cars that will be at the show.

This will be my eighth time crossing the U.S.A. by car, and this is the oldest vehicle I’ll have ever attempted it in. A friend and I once did Boston to LA in an ’88 Mitsubishi Starion which is thematically pretty close—but the ’80s were a whole lot more recent-past at that point. And I was a spry 15 years younger than I am now!

As of this writing, I’ve done about 400 shakedown miles with the Z around greater Los Angeles, keeping a careful eye on water temp and trying to get good gasoline running through its injectors. With the last little steps I mentioned earlier, I’m feeling pretty confident that the car will be up for a 3,000-mile trip.

My main car-related concern, I guess, is some kind of critical misfire or rubber hose I forgot to replace popping and leaving me stranded in the middle of nowhere. Personal fatigue is going to be a real factor, too. This trip would be no sweat in a brand new car but I’ll spend a week straight listening and feeling carefully for malfunctions—I’ll be pretty cooked by the time I pull up to the finish line. Here’s hoping all goes well.

Please follow along and keep an eye on me during the crossing! And if you haven’t checked out our IG feed lately, seriously, come on through because we revamped it somewhat recently and it’s looking great.

Send us an email: [email protected]

The post My 1984 Nissan 300ZX Is Trying To Cross the USA After a Year in Storage appeared first on The Drive.