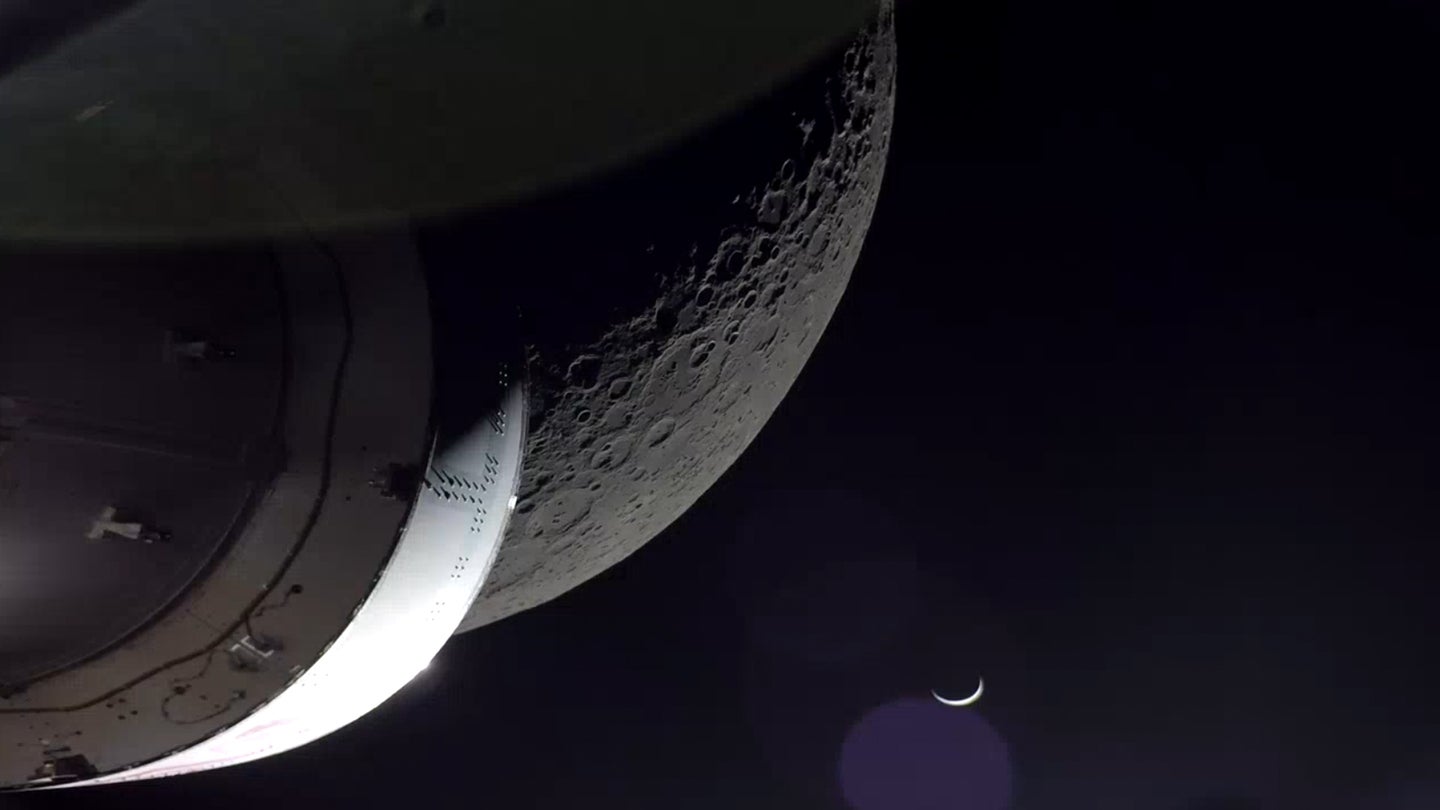 The majesty of space will never cease to confuse and amaze mankind. Its inky blackness is a beautiful, terrifying void of infinite emptiness but somehow also full of answers to all of our questions about the universe. NASA has been trying to study that horrifying majesty for decades, to try and understand it so we can better understand our own planet. In its latest attempt to do so—the Artemis I mission—the Orion spacecraft snapped some photos from around 80 miles off the surface of the moon, and they’re nothing short of breathtaking.

One of the photos buzzing around social media was taken at just 79 miles away from the moon’s surface. It’s a gorgeous shot, taken from one of Orion’s many modified GoPros, and gets us up close and personal with the silver dollar we see in the sky every night. Perhaps even more mind-blowing than that is what’s in the background.

Floating in the distance behind the moon is the earth, looking like a thin sliver of light. That sliver represents all eight billion of us; everything we’ve built and everything we’ve ever known. It’s home. Our pale blue dot. And in this photo, it’s about 238,000 miles away, with only nothingness in between. It’s almost impossible to look at that and feel anything but incredibly small. All of our troubles, our petty squabbles, are right there, in a tiny sliver you could block out with your fingernail.

And yet, it also makes me feel incredibly special to know that we’re a part of something so vast. Carl Sagan once said that we’re star stuff, made from the same material that makes up the stars. So the vast emptiness that you see in Orion’s photo isn’t just emptiness, it’s also our past. It’s a part of us. It’s where we came from.

It’s also a testament to human achievement. Being that this is The Drive dot com, transportation is sort of our thing. And there’s no form of transportation more unfathomably cool than space travel. In just a couple of generations’ time, we went from horseback as our main form of getting around to sending selfies back from the moon. As dumb as social media makes humans seem, we’re pretty freakin’ awesome.

One day, NASA hopes to build Gateway, a lunar-orbiting space base to shuttle astronauts back and forth from the moon. Once that happens, humans will gain a far better understanding of our moon and potentially our own planet. But it will also be the ultimate step in human transportation. Not only will we get to the moon again, but we’ll also be able to Uber to it.

The post NASA’s Orion Is Taking These Amazing Photos During Its Mission to the Moon appeared first on The Drive.