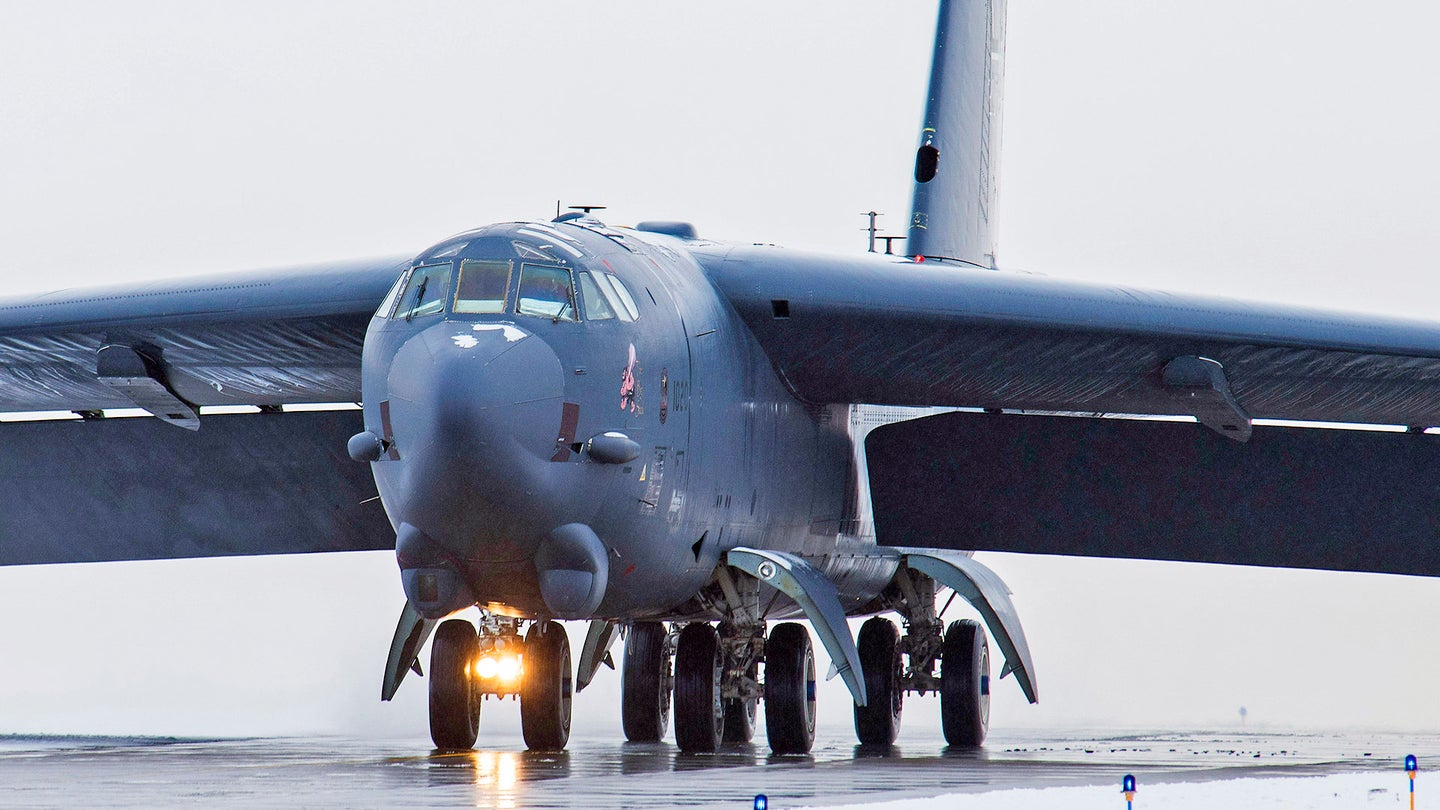 Beginning Monday, NATO will kick off its annual nuclear deterrence exercise known as Steadfast Noon. U.S. Air Force B-52 bombers are among the aircraft slated to participate in the event, which will be carried out over northwestern Europe and the North Sea. While Steadfast Noon is an established recurring exercise, this year’s iteration will be taking place amid heightened tensions with Russia after President Vladimir Putin threatened the use of nuclear weapons as a response to the success of recent Ukrainian counteroffensives. Moscow is also projected to hold its own annual nuclear exercises any day now.

According to the NATO announcement, air forces from across the alliance’s member countries will fly dozens of aircraft to exercise their nuclear deterrence capabilities starting on Monday, October 17, and continuing until Sunday, October 30. In the announcement, NATO Spokesperson Oana Lungescu said that the Steadfast Noon “exercise helps ensure that the Alliance’s nuclear deterrent remains safe, secure, and effective,” which maintains the historical precedent that has been set by the event in each of the previous years that it has been conducted.

Steadfast Noon, which is hosted by a different NATO ally each year, will this year take place in Belgium. Training flights will occur over the country as well as the in the airspace above the North Sea and the United Kingdom and will include forces from 14 countries with up to 60 aircraft of various types, including fourth- and fifth-generation fighter jets, as well as surveillance and tanker aircraft. NATO has also made it a point to emphasize that Steadfast Noon is a routine, annual training activity and that it is not at all linked to any current world events and noted that no live weapons will be used during the exercise.

While this is all true, it is very hard to imagine that it won’t be viewed in a different light for this iteration.

It is also necessary to note that the only NATO-member states that have organic nuclear weapons capabilities are the United States, the United Kingdom, and France. Beyond that, under the NATO nuclear-sharing arrangement, B61 nuclear gravity bombs are housed in Belgium, Germany, Italy, and the Netherlands, and can be employed by their respective tactical jet aircraft. Non-strategic NATO combat jets capable of carrying nuclear weapons include the F-15E, F-35, F-16, and Tornado. They are referred to as Dual-Capable Aircraft (DCAs) in NATO parlance, and you can read more about them in this past War Zone feature.

As mentioned earlier, Air Force B-52 long-range bombers from Minot Air Force Base in North Dakota were prominently noted by NATO as participating aircraft in this year’s exercise, which isn’t a new development for Steadfast Noon but is nonetheless an interesting one as B-52s haven’t been included in every exercise in the past. The War Zone has reached out to both the Air Force Global Strike Command (AFGSC) and Minot Air Force Base for additional information about the B-52’s history with Steadfast Noon but has yet to hear back.

Regardless, some have insisted that the bomber’s participation this year is a significant development. One such person is Hans M. Kristensen, director of the Nuclear Information Project at the Federation of American Scientists, who shared a tweet highlighting the gravity of the nuclear-capable B-52s, which are strategic platforms, taking part in Steadfast Noon as the typical focus of discussion around the event is on non-strategic aircraft. Essentially, the aforementioned DCAs are traditionally the primary aircraft used in nuclear deterrence exercises, making it so the choice to include the B-52 this year specifically is difficult to ignore.

NATO understandably keeps most of the details about Steadfast Noon held close to the chest, so it’s difficult to grasp exactly what scenarios this year’s event will consist of. You can read what previous events entailed here. However, it can at the very least be assumed that no matter the specific threat NATO will be focusing on, Steadfast Noon will serve as a chance for allied nations to practice executing the procedures and disciplines required when responding to a potential nuclear attack.

While NATO says that this year’s exercise isn’t targeted toward any nation, in particular, the alliance has one primary nuclear foe and it just happens to have invaded a European country and is embroiled in an all-out conventional conflict there. So, it clearly sends a message and one that has pointed meaning this time around.

It is also worth mentioning that Belgium, which will be hosting this year’s exercise, is home to Kleine Brogel Air Base. When paired with Büchel Air Base in Germany, as well as air bases in Italy, the Netherlands, and Turkey, approximately 150 B61 nuclear gravity are stored in Europe. Turkey is not a member of the NATO nuclear sharing arrangement, so those bombs are for U.S. use only, although no U.S. DCA are permanently based where they are stored.

Aside from Turkey, the sharing arrangement releases these bombs to the remaining countries listed in the case of a major crisis. However, in order for the United States to use the B61s in an emergency, the nations involved would need to execute a regimented authorization process that would give the clearance needed for their jets to be loaded-up with the weapons and deliver them to the specified target. Steadfast Noon will consist of drills meant to exercise this disciplined and high-stakes process.

Based on assessments coming from outside Russia, Moscow is also expected to begin its own set of nuclear exercises in the coming days. There are called ‘Grom’, and what exactly these could look like is unclear under the current circumstances. U.S. officials speaking to Reuters have said that Grom will likely include test launches of ballistic missiles and other routine “large-scale maneuvers of its strategic nuclear forces.”

It is important to note that Russia has been known to hold its annual nuclear drills in the fall, but that has been inconsistent in recent years due to the COVID-19 pandemic. Either way, ensuring that the United States is able to discern any evaluatory nuclear exercises occurring in Russia from real threats, which Putin hasn’t been shy about expressing in recent weeks, will be critical.

To add to the uncertainty surrounding Russia’s Grom exercises, it has been widely reported that Russian strategic bombers had been spotted flying close to the Norwegian border. The Jerusalem Post recently obtained satellite imagery that showed an increased presence of long-range strategic bombers, including Tu-160s and Tu-95s, at the Russian Olenya Air Base on Norway’s Kola Peninsula.

However, the sightings don’t mean much beyond superficial signaling as forward deploying long-range nuclear-cruise missile-carrying aircraft there has little relevance. In fact, they are more vulnerable and visible there than at their normal bases or other inland alternatives. Olenya is also a major training hub and serves other purposes for the Russian Air Force, so bomber activity there is not necessarily out of the ordinary.

Needless to say, it’s a very tumultuous time for both NATO and Russia to be going ahead with their respective nuclear drills. However, NATO officials seem to agree that canceling the exercises in light of recent events could be more of an issue than just going through with them.

In a Tuesday press briefing, NATO Secretary General Jens Stoltenberg outwardly told reporters that canceling Steadfast Noon would send a “very wrong message,” essentially insisting that continuing to strengthen the NATO alliance will be the best tactic to avoid escalating the situation beyond its current status.

That being said, it’s important to note that the U.S. has deferred multiple strategic weapons tests this year to avoid increasing tensions or worse, with one Minuteman III intercontinental ballistic missile test having been postponed due to tensions with Russia, and another getting put off in light of issues with China. But this was before the war in Ukraine had reached such a perilous point with the rhetoric being directly nuclear-related.

It will be interesting to see how Steadfast Noon plays out over the next couple of weeks and what Russia’s own exercises may end up looking like. We will report back as this story develops and if we hear back from the AFGSC or Minot Air Force Base.

The post NATO Nuclear Drills Featuring B-52 Bombers To Begin Monday appeared first on The Drive.