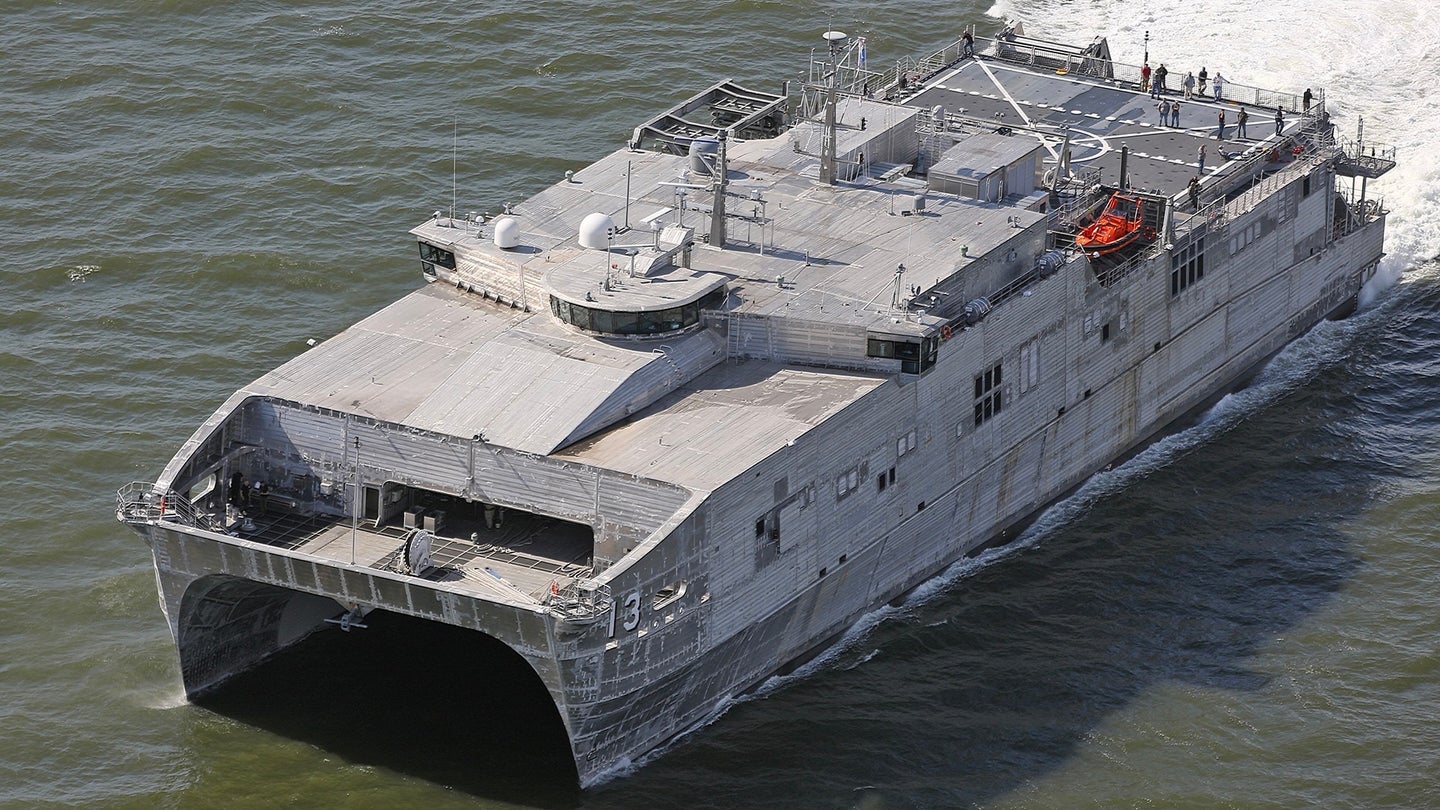 The APALACHICOLA seen in May undergoing builder’s sea trials in the Gulf of Mexico. Austal USA.

The U.S. Navy’s Military Sealift Command (MSC) is set to receive its newest ship, the thirteenth in a series of high-speed EPF expeditionary transports providing logistics services around the globe. But Number 13 is special – not only is it the first EPF fitted with autonomous navigation and operating systems, but it is possibly the world’s largest ship capable of unmanned operation.

Yet as of now, neither the Navy nor MSC has any plans to use the unmanned capability when the USNS Apalachicola (T-EPF 13) enters the fleet. Rather, MSC intends to send the vessel to the western Pacific to serve as a logistics ship with the U.S. Seventh Fleet.

It seems an odd choice, given the strong emphasis Navy leaders place on the importance of developing a fleet of up to 150 unmanned ships by the mid-2030s. While several medium-sized unmanned surface vessels are already in service or under contract, the size of the EPF puts it squarely into the large USV category, a type that could well be fitted with offensive missile systems.

The Apalachicola was launched last November by Austal USA in Mobile, Alabama. Since June 2022, the ship has run a series of autonomous trials of increasing complexity and distance. One conducted in late July into early August ranged as far as the southern tip of Florida and the Miami coast, high-traffic areas that would challenge the vessel’s autonomous navigation systems.

“In transit from Mobile, Alabama, to Miami, Florida, Apalachicola’s autonomous system completed a stress test in high-traffic coastal areas by taking appropriate ship handling actions while operating around other ships, boats, sailboats, and craft,” NAVSEA said in a Sept. 9 press release. “Overall, the ship was in autonomous mode for approximately 85 percent of the multiple day at-sea period.”

“The ability to expand unmanned concepts into the existing fleet was validated by these trials,” Roberts said in the press release. “The capabilities integrated onto EPF 13 set the groundwork for future autonomous operations.”

Austal USA in Mobile, Alabama – designers and builders of the Spearhead class – has long been working on a wide range of unmanned surface vessel designs, including unmanned variants of the EPF. The Navy did not request funding for the unmanned fast transport, but Congress was significantly impressed by the proposal to add about $50 million in the fiscal 2021 defense appropriations act specifically to modify EPF 13.

The autonomous portion of the ship was produced under a $44 million contract awarded to Austal USA in June 2021. In a press release at the time, Austal USA said “the work will include installation of a perception and autonomy control suite, as well as several automation enhancements to the machinery plant improving hull, mechanical, and electrical (HM&E) reliability while reducing the amount of personnel required for operations and maintenance at sea.” Austal noted that the existing EPF machinery plant is already highly automated to allow for a smaller crew.

The EPF Autonomous Prototype project, according to Austal, aimed to produce a ship that could:

The machinery control system includes the ship’s propulsion plant and electrical plant controls. According to Austal, it is able to provide navigational and shiphandling tasks including setting navigation lights, handling day shapes, recognizing anomalies and providing a response; and conducting machine learning for condition-based maintenance.

The MCS was developed in-house by Austal, supported by a Siemens partnership; the system already is in service aboard other EPFs and aboard the Navy’s Ghost Fleet Overlord unmanned surface vessel Nomad. It is reconfigurable to multiple propulsion configurations, a characteristic dubbed “machinery agnostic.”

The ship’s navigation scheme includes the General Dynamics – Applied Physical Sciences Corporation’s FutureWaves system. It provides real-time decision-making based on sea states. The system, in use for several years aboard Military Sealift Command and commercial ships, provides ship motion forecasting based on data from an advanced wave-sensing Doppler radar.

Austal USA and MSC have confirmed that the autonomous systems will remain in place aboard Apalachicola when the ship is delivered. MSC plans to bring the ship to Joint Expeditionary Base Little Creek in Virginia for normal post-delivery testing and a post-shakedown shipyard availability before moving it to San Diego and then to the western Pacific to take up logistics chores.

The Apalachicola already is one of the world’s largest autonomous ships, if not the largest, and is significantly bigger than the Navy’s Ghost Fleet Overlord unmanned ships. The latest Overlord ship, Mariner, delivered in August, is 194 feet long with a beam of 32 feet, and has a maximum allowable displacement of 673 metric tons.

In terms of sizeable unmanned vessels being developed in the commercial world, the small Norwegian container ship Yara Birkeland, is being billed as the world’s first truly autonomous merchant ship. Christened in April and funded in part by the Norwegian government, the Birkeland is 260 feet long, has a beam of 49 feet, and has a carrying capacity of 3,200 deadweight tons. Still under testing, the ship is intended to operate as an unmanned vessel in coastal service between the Norwegian ports of Brevik and Heroya – a modest distance of about seven nautical miles.

At present, there are no operating funds available to use the Apalachicola’s autonomous systems. According to multiple sources, there are no approved Navy plans to use the ship as a developmental autonomous asset with the Ghost Fleet Overlord ships operating under NAVSEA’s Unmanned Maritime Systems (PMS 406) office.

Navy leadership, however, is aware of the opportunity presented by the Apalachicola. The service is in the process of finalizing the fiscal 2024 budget request due to Congress in February or March, and funding for the ship as an autonomous test asset could, repeat could, appear in some form in the request.

The post Navy About To Get World’s Largest Unmanned Warship But Has No Plans To Use It appeared first on The Drive.