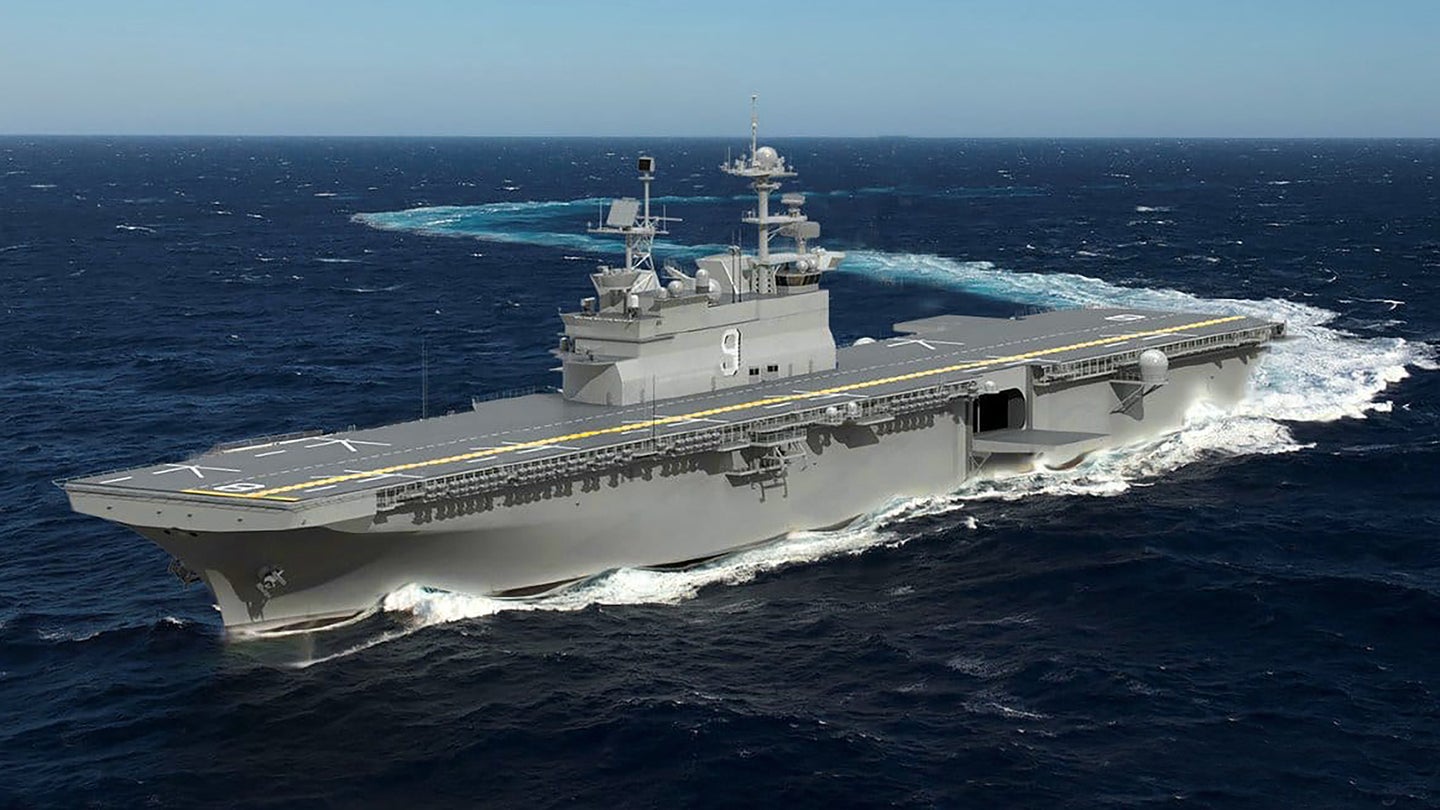 The U.S. Navy has formally announced that a future America class amphibious assault ship with the hull number LHA-9 will be named USS Fallujah. The name is meant to memorialize the First and Second Battles of Fallujah, which were American-led offensives carried out during the Iraq War, and cements LHA-9 as the first ship to be named after a battle from a post-9/11 era.

It is an established convention that U.S. Navy amphibious assault ships, regardless of class, be named either after battles where the Marine Corps was victorious, early U.S. sailing ships, or legacy names of older carriers from World War II. For the America class, which is currently slated to be made up of five vessels including the forthcoming LHA-9 and the future unnamed LHA-10, as is customary, was named after the first-in-class ship — USS America (LHA-6). The second was named USS Tripoli (LHA-7) in honor of the 1805 Battle of Derne during the First Barbary War — a conflict so significant to the Marine Corps that it is highlighted in their hymn. The third is named USS Bougainville (LHA-8) after an island in the Solomons in the southwestern Pacific where a historic World War II campaign occurred from 1943 to 1945.

In the cases of both Tripoli and Bougainville, ships with those same names have already come and gone in Navy service before. However, there has never been a USS Fallujah before now, making it so the vessel will be carrying on a legacy in more ways than one.

“It is an honor to memorialize the Marines, Soldiers, and coalition partners that fought valiantly and those that sacrificed their lives during both battles of Fallujah,” said Secretary of the Navy Carlos Del Toro in an official service announcement. “This namesake deserves to be in the pantheon of iconic Marine Corps battles and the LHA’s unique capabilities will serve as a stark reminder to everyone around the world of the bravery, courage, and commitment to freedom displayed by those who fought in the battle.”

The future USS Fallujah will be the fourth large-deck amphibious assault ship to join the America class and is being built by the Huntington Ingalls (HII) shipbuilding company. HII was awarded the contract to begin building LHA-9 this October and construction is set to start this month. Like the other ships in the America class, the future USS Fajulla will resemble a small aircraft carrier, but it will belong to a substantially different subclass within the America class family thanks to the return of a floodable well deck and a significant reconfiguration of its flight deck layout and island design. USS Bougainville (LHA-8) was the first to be built in this configuration, which you can read all about in this past War Zone feature. LHA-8 and the subsequent ships with this revised design, including LHA-9, are expected to have a similar displacement of about 43,300 tons to the preceding members of the class.

The missions of the America class ships in both configurations are multi-faceted. These are some of the most versatile warships ever conceived. Generally, they are designed to put ashore Marines using a mix of UH-1Y utility and AH-1Z attack helicopters, MV-22B Osprey tiltrotor transports, CH-53E Super Stallions, and CH-53K King Stallions. F-35B stealth fighters or, increasingly less commonly, AV-8B Harrier jump jets provide air support for those forces.

For LHA-8 and the other ships in its subclass, with their well decks, landing craft, including giant LCAC hovercraft, will support this mission set.

The same range of capabilities the America class ships use to support their primary mission as amphibious assault and strike platforms also allows them to be employed as hubs for disaster relief operations, counter-terrorism and personnel evacuation platforms, command and control ships, and much more.

Up until now, Navy vessels hadn’t been named after any modern military operations that occurred after 9/11, though it is worth noting that other ships have been named to honor specific individuals who gave their lives in post-9/11 conflicts, like the Zumwalt class destroyer USS Michael Monsoor. When it comes to recognizing the Battles of Fallujah specifically, naming a Marine-carrying ship after the operations is something that has been in the works for a while.

The First Battle of Fallujah took place during the Iraq War, beginning in April 2004 and ending almost an entire month later. Nicknamed Operation Valiant Resolve, the campaign served as an operation against local militants in the city of Fallujah and tasked Marine Corps infantrymen with either capturing or eliminating the insurgents that were responsible for the very public killing of four military contractors employed by the U.S. company Blackwater month prior.

The Marines quickly retook a majority of the city within a week, but caused significant infrastructural damage and a number of civilian deaths. Under pressure from the international community, U.S. forces subsequently withdrew and turned over responsibility to the 1,100-man Fallujah Brigade, an ad hoc organization led by former Iraqi military personnel. On April 28, the brigade assembled on the outlying perimeter of Fallujah, and the Marines pulled back from the city on May 1, ending the First Battle of Fallujah.

Among those who died during the operations included 39 Americans, about 200 Iraqi militants, and anywhere from an estimated 200 to 600 civilians.

The Second Battle of Fallujah, also known as Operation Al-Fajr (‘Dawn’ in English) or Operation Phantom Fury, was carried out in the winter of 2004 from Nov. 7 to Dec. 23 in response to insurgents regaining control of the city that spring in the wake of the collapse of the Fallujah Brigade. This time around, the campaign was led by the Marine Corps and the U.S. Army in partnership with the recently formed Iraqi Interim Government, as well as British forces.

At this point, Fallujah had become a stronghold for insurgent and extremist forces who had spent the previous five or so months stockpiling weapons and building defenses across the city, which included numerous improvised explosive devices (IEDs). Before the second battle began, U.S. forces, joined by their Iraqi and British allies, chose to encircle Fallujah with checkpoints, preventing anyone from coming or going.

Weeks of airstrikes and artillery shelling preceded the ground operations and the several days of street fighting that followed ultimately secured the city center. Still, small-scale attacks nonetheless persisted for weeks after that, killing over 100 coalition forces, thousands of insurgents, and an undetermined amount of civilians as well. It wasn’t until January 2005 that any remaining American and allied units finally left the city.

It is the combination of these two battles that have led military officials and academics alike to regard both operations as some of the heaviest urban combat since the Vietnam War. The Navy’s press release about the future USS Fallujah says that the second battle over the city in particular “is considered the bloodiest engagement of the Iraq War and the fiercest urban combat involving U.S. Marines since the Vietnam War’s Battle of Hue City.”

“Under extraordinary odds, the Marines prevailed against a determined enemy who enjoyed all the advantages of defending in an urban area,” said the Commandant of the Marine Corps Gen. David H. Berger. “The Battle of Fallujah is, and will remain, imprinted in the minds of all Marines and serves as a reminder to our Nation, and its foes, why our Marines call themselves the world’s finest.”

Even though the Iraq War wasn’t near as long ago as World War II and the other storied conflicts that have inspired the names of many a U.S. Navy warship, it would appear the service feels enough time has passed for USS Fallujah to make history by its name alone.