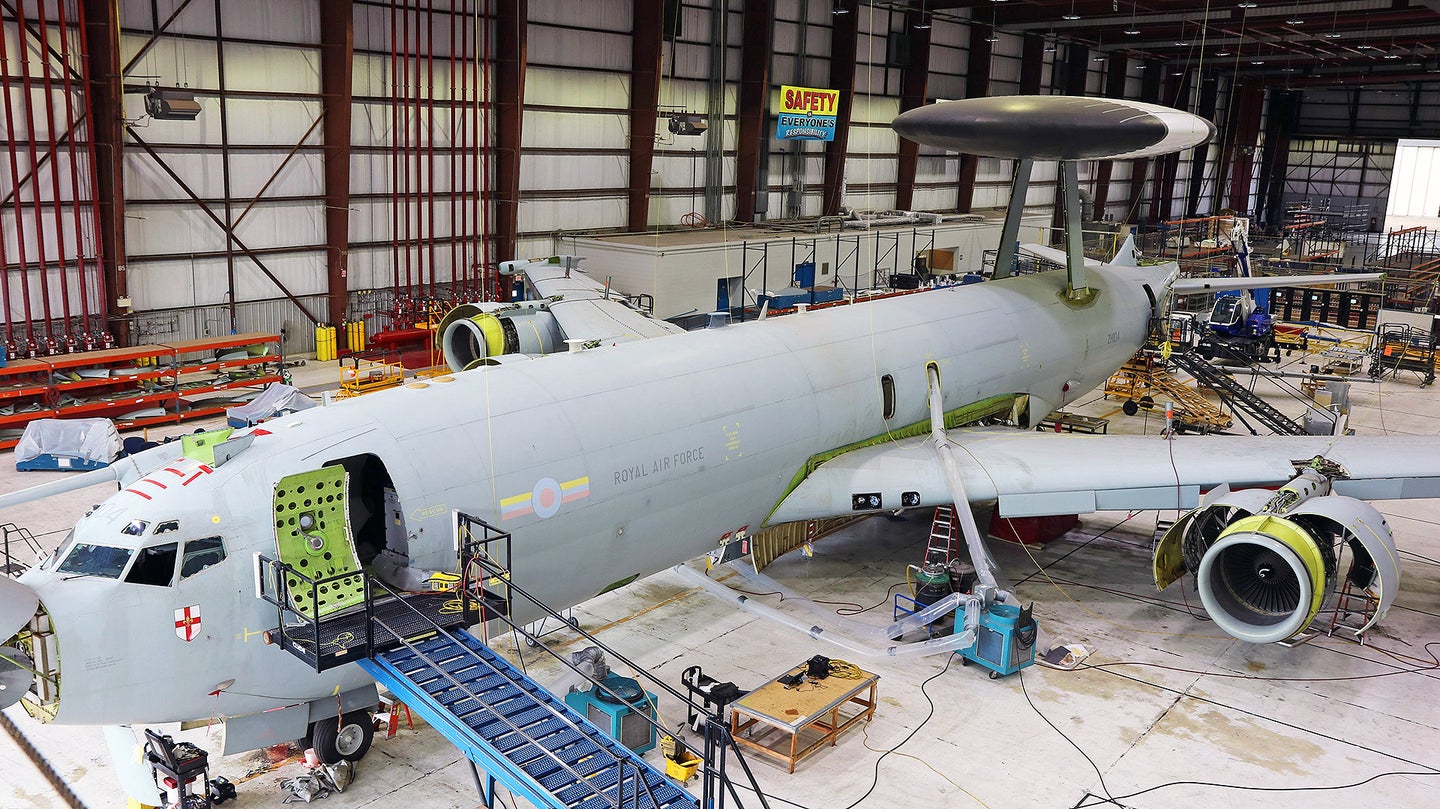 Work has begun to transform a former U.K. Royal Air Force E-3D Sentry AEW1 radar plane into a bespoke training aircraft for flight crews of the U.S. Navy’s E-6B Mercury jets, the so-called ‘doomsday planes’ that act as airborne command posts for America’s nuclear deterrent forces. The conversion process continues the second life for a part of the British Sentry fleet, which once numbered seven aircraft. Three others have been transferred to Chile, which will use them in their original Airborne Warning And Control System, or AWACS, configuration, as you can read about here.

A recent photo released by Naval Air Systems Command, or NAVAIR, shows the E-3D, serial ZH104, in a hangar at Lake Charles Airport in Louisiana. Although most of the tailfin has been removed, the aircraft still looks very much as it did when it was withdrawn by the RAF in 2020, including its British national and squadron markings.

However, NAVAIR notes that there are significant changes ahead that will see the aircraft — which was purchased at a cost of $15 million by the Airborne Strategic Command, Control, and Communications Program Office (PMA-271) — modified to conform to the “outer mold line” of the E-6B.

Work is being carried out at Lake Charles by Northrop Grumman’s Maintenance and Modification Center. This process will include the removal of the distinctive rotating radar dome as well as the inflight refueling probe, both of which are still fitted in the photo. The result will be an “E-6 in disguise,” according to NAVAIR.

Meanwhile, the E-3D has been stored at Lake Charles since at least February 2021, having been flown to the United States in January 2020. According to NAVAIR, once modifications are complete, and the aircraft is returned to full airworthiness, flight-testing is planned to begin at Naval Air Station Patuxent River, Maryland, in early 2024.

At this stage, it’s not clear how the aircraft will be designated, although TE-6 would seem a likely choice, denoting that it is a dedicated training asset. There does not appear to be any current plan to include any mission training equipment onboard, with previous contracting documents referring only to a requirement for “initial and recurring E-6B pilot training,” which is currently all conducted using standard E-6Bs.

In that sense, the trainer will parallel the three TC-135Ws used by the Air Force to train flight crews for the RC-135 family of strategic reconnaissance aircraft. All three TC-135Ws are dedicated trainers with no mission equipment installed, although two of them feature dummy ‘cheeks’ and the prominent ‘hog nose’ to replicate the aerodynamic qualities of the RC-135V/W.

Once in service, NAVAIR expects the training jet to complete an estimated 600 flight hours and 2,400 landings/cycles each year. In turn, the related wear and tear will be removed from the frontline E-6B aircraft, extending these aircraft’s service lives, and boosting availability for operational taskings. The new trainer will also have the effect of reducing the time required to train qualified aircrews for the E-6B mission.

In service for more than three decades, the aging E-6B fleet is a growing concern for the Navy. These aircraft are also subject to some unique stresses and strains, including the repeated very steep and tight banking turns that are used to deploy the primary VLF antennas. In this way, the antennas are brought as close to vertical as possible for maximum transmission effectiveness.

Since the E-3D and E-6B are both based on the Boeing 707, the training jet will provide an ideal surrogate for Mercury crews. The E-3D and E-6B also share the fuel-efficient high-bypass CFM56 engines that are not found in the U.S. Air Force E-3 fleet, for example, which retains the older TF33 engines.

According to a statement from NAVAIR at the time that the E-3D purchase was announced, the Navy had been looking to field a dedicated trainer for the E-6D for some time:

“Since the E-6’s inception over three decades ago, the Navy has looked for ways to train pilots and keep them up to date on the airframe. Those options have included leasing several different commercial aircraft as well as using the mission-capable aircraft.”

Ultimately, however, the days of the E-6B fleet could be numbered, with the Navy now having taken the decision to start acquiring a successor based on the C-130J platform, initially at least, under the E-XX initiative. In some respects, this turns the clock back to the Cold War days of the EC-130Q, the E-6B’s predecessor in the airborne nuclear command and control support mission. However, there is a possibility that the mission will be scaled back with the EC-130J. So far, the Navy has only confirmed that the aircraft will be configured to provide an airborne link to the Navy’s ballistic missile submarines, also known as the Take Charge And Move Out, or TACAMO mission.

Currently, the E-6B fulfills both the TACAMO mission and the U.S. Air Force’s Airborne Command Post (ABNCP) mission, which involves maintaining communications with intercontinental ballistic missile (ICBM) and bomber units. Using the Airborne Launch Control System (ALCS), the E-6B can even be used as an alternative means of launching ICBMs remotely if other command and control nodes get destroyed, making it an extremely important component of the overall deterrent capability.

The 16 E-6Bs are operated by two squadrons, the “Ironmen” of VQ-3 and the “Shadows” of VQ-4 at Tinker Air Force Base, Oklahoma.

The potentially more limited mission scope of the planned EC-130J may suggest that this aircraft will operate alongside the E-6Bs, at least for a while. Long-term, however, full retirement of the E-6B is planned under E-XX, although it’s uncertain whether this will be achieved exclusively via the EC-130J, a different platform altogether, or a combination. There’s also the possibility that the ABNCP mission will return to the Air Force, as it was during the Cold War with the EC-135 Looking Glass.

At one stage there was a tentative Air Force and Navy plan for a new joint platform to directly replace the E-6B, among others, but that project appears to have been terminated by 2020.

As for the RAF, the service is now taking a ‘capability holiday’ in the field of airborne early warning and control, having formally retired the Sentry in October last year. The arrival of the first of its new E-7A Wedgetail AEW1 aircraft is planned for 2024. However, budget cuts have seen the U.K. Wedgetail fleet reduced from five to just three aircraft.

The transfer of a single second-hand E-3D also continues a pattern of surplus military aircraft finding their way from the United Kingdom to the United States. Previous examples include the purchase of a single former RAF C-130J transport for use as the Fat Albert support aircraft for the Blue Angels. Prior to that, the U.S. Department of Defense snapped up ex-RAF Harrier GR9/9A attack aircraft to provide spare parts for the Marine Corps AV-8B fleet.

Ultimately, the future of the U.S. airborne nuclear control and communications mission, and especially the E-6B part of it, still needs to be figured out. At least until then, the E-6B will continue its mission, with the availability of a dedicated crew trainer after 2024 only helping extend the potential lifespan of this vital national security asset.