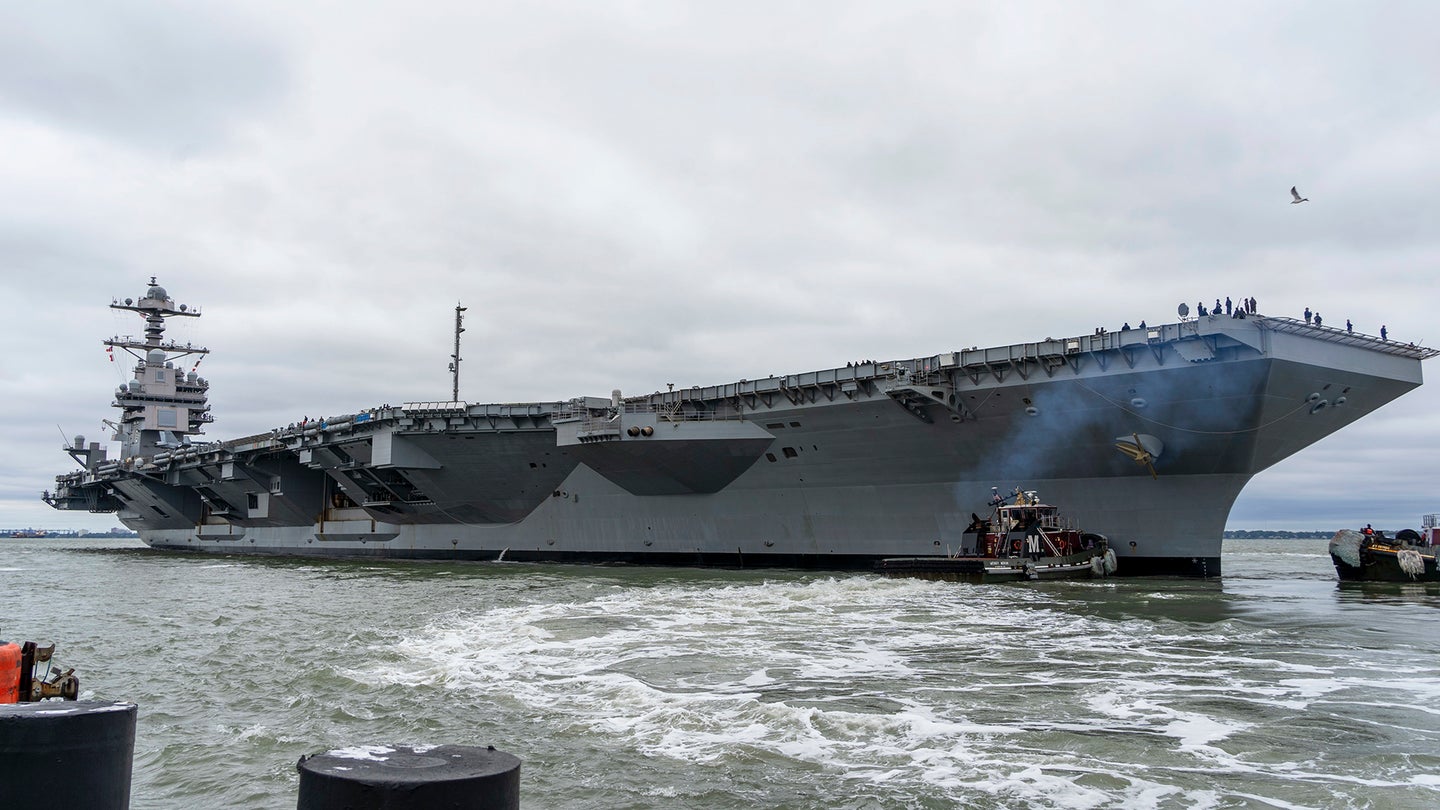 Five years after being officially commissioned, the U.S. Navy’s newest supercarrier, the USS Gerald R. Ford, has set sail into the Atlantic Ocean on its first formal deployment. This event has been years in the making for the Ford, which suffered from a variety of major technical issues before and after its official delivery to the Navy.

Ford left Naval Station Norfolk in Virginia this afternoon, two days later than originally scheduled due to poor weather in the region as a byproduct of Hurricane Ian. U.S. 2nd Fleet, the Navy command responsible for activities in much of the northern Atlantic, streamed video, seen below, of the carrier being pushed away from the pier. Additional pictures from the event, seen at the top of this story and further below, were subsequently released.

This is, of course, not the first time Ford has put to sea. The ship has conducted a number of sea trials and certifications, and has taken part in various test and training activities over the years.

“This deployment is an opportunity to push the ball further down the field and demonstrate the advantage that Ford and Carrier Air Wing 8 bring to the future of naval aviation, to the region, and to our Allies and partners,” Navy Rear Adm. Gregory Huffman, commander of Carrier Strike Group 12 (CSG 12), said in a statement ahead of the deployment last month.

The Navy previously said Ford‘s journey in the Atlantic would be a limited “service-retained deployment,” but the ship is expected to cross the Atlantic and conduct a variety of exercises with other U.S. forces, as well as its allies and partners. Elements of the Canadian, Danish, Finnish, French, German, Dutch, Spanish, and Swedish militaries are all expected to work with the Ford and the rest of its strike group over the course of the deployment.

“The Atlantic is an area of strategic interest,” Dwyer had said in an official statement about the Ford‘s upcoming deployment last month, as well “Our primary goal is to contribute to a peaceful, stable, and conflict-free Atlantic region through the combined naval power of our Allies and partners. The deployment of USS Gerald R. Ford’s carrier strike group is the natural progression of our renewed commitment to the Atlantic.”

The Navy re-established U.S. 2nd Fleet in 2018 in response to concerns about emerging threats in the North Atlantic, particularly from the Russian Navy and its expanding fleet of more modern and very quiet guided and ballistic missile submarines.

All told, the Navy is certainly happy to have finally deployed Ford after years of technical issues and related delays, including with its new electromagnetic aircraft catapults and electronically-tuned arresting gear, weapon elevators, radars, and other systems. All of this has hampered the ship’s progress toward becoming a truly operational asset and added billions of dollars to its cost. Ford‘s cost was officially capped at $13.2 billion, nearly $3 million more than originally expected, Subsequent ships in the class are expected to have higher unit costs, as well.

Beyond simply providing the Navy with a new, more advanced carrier, Ford will also hopefully help mitigate separate problems with regard to the service’s overall carrier capacity. High operational tempos, coupled with high demand for carrier deployments, have led to Nimitz class carriers remaining deployed for protracted periods of time and/or seeing their downtime in between deployments be severely truncated on multiple occasions in recent years. This has been further exacerbated by maintenance backlogs and other issues.

At the same time, the Navy has made clear that this cruise is still something of an initial test of the carrier in a more operationally relevant context. A true “global” operational deployment is not set to occur until sometime next year.

“We’ve got our allies and partners with us, so that really kind of makes us work a little bit harder to make sure we’re all talking. So when we go out and we sail on the high seas, it’s a thing to just launch and recover aircraft every single day, to have the battle rhythm of command and control throughout the carrier strike group,” Navy Capt. Paul Lanzilotta, the Ford‘s commanding officer, explained to reporters last month, according to USNI News. “We’re going to refine all that with our team, just building our – the people part of operating together. We’re going to stress the logistics strain a little bit. So by operating further away from home, we’ll be demonstrating what navies do every single day all around the globe.”

It will definitely be interesting to learn more about the exact scale and scope of Ford‘s forthcoming activities as its limited deployment gets more underway. The Navy appears to be equally interested in seeing whether or not the issues with the ship’s various systems have truly been resolved to a satisfactory degree and if they will work as expected under operational conditions far from home after all these years.