Navy’s Stealth Destroyers Could Get Massive Upgrades Beyond Hypersonic Missiles 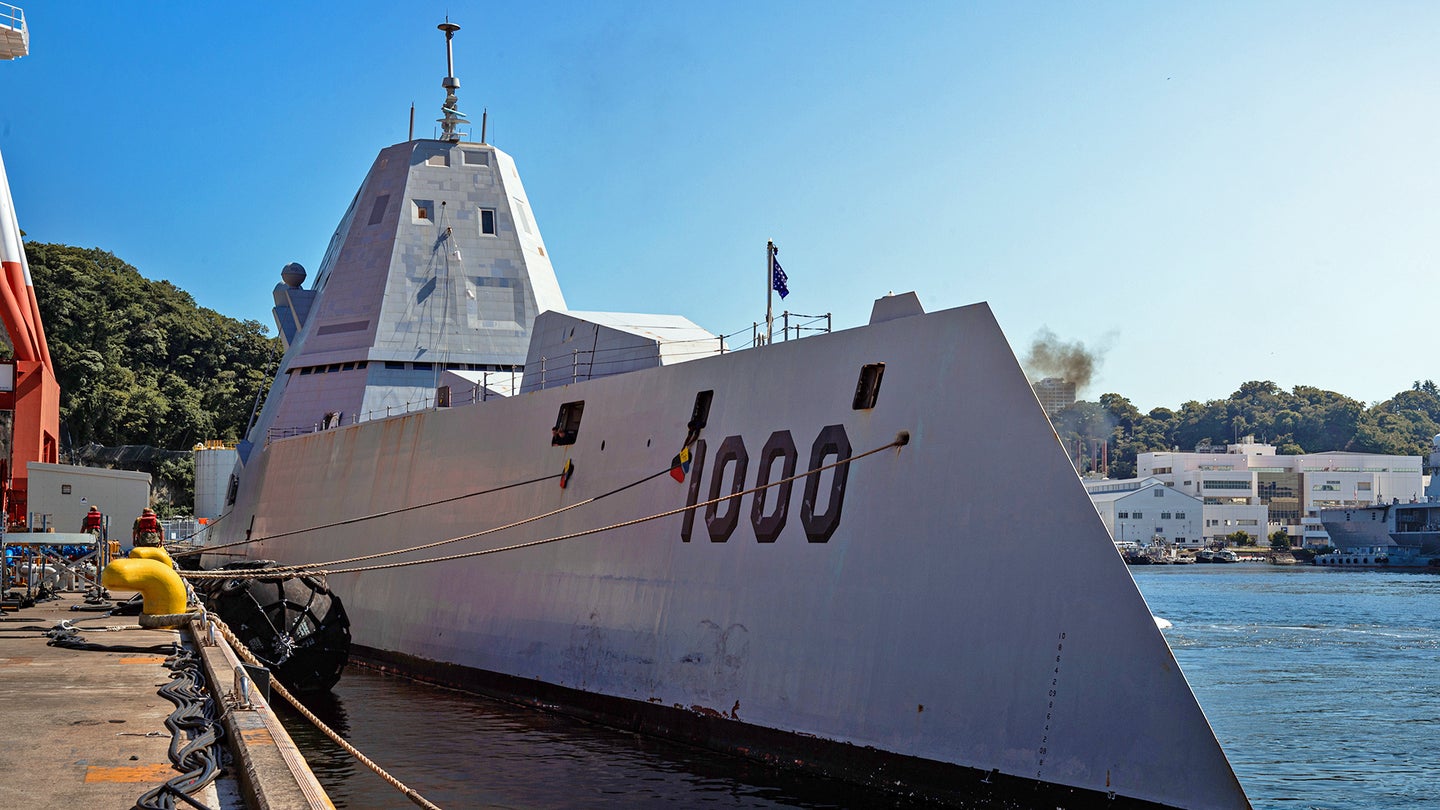 USS Zumwalt (DDG-1000) is back from the Western Pacific after completing its first operational deployment and the service’s Pacific Fleet commander is talking about his hopes for the class’s future and how they will be employed in combat. Meanwhile, the U.S. Navy is also putting forward its plans for deeply upgrading the stealthy guided-missile destroyers in order to realize this vision.

Last Friday during this year’s Military Reporters & Editors Association Conference in Washington, D.C., at which The War Zone was in attendance, the Navy’s Pacific Fleet (PACFLT) commander Adm. Samuel Paparo was asked about the lessons learned after Zumwalt’s recent deployment to the Pacific region. Beginning August 1, Zumwalt departed its home port of Naval Base San Diego and proceeded to patrol east Asia for three months before ultimately returning on Nov. 10. Zumwalt first made a port call in Guam and then traveled to Japan, participating in training events throughout the trip, which Adm. Paparo explained were largely helpful in ascertaining how exactly the destroyer will integrate with PACFLT.

“We learned a lot,” said Paparo when speaking to reporters during the conference. “The main thing we learned about was how to sustain it, as it’s often operating. It’s an exquisite capability with a ton of promise. It’s been a troubled program, as all in the room are very well aware, which is why we deployed it with so little fanfare. We’re really kind of, you know, worker-like in getting the Zumwalt west of the dateline, operating her, operating her systems, stretching and training its crew, integrating it with the rest of the fleet, to bring its capabilities to bear.”

The War Zone was the first to report on the deployment, and at the time, the Navy wasn’t as forthcoming in defining it as an operational deployment as they now appear to be.

Zumwalt is the first of what will eventually be three ships belonging to this class, with its siblings being the USS Michael Monsoor (DDG-1001) and the future USS Lyndon B. Johnson (DDG-1002), the latter of which is projected to be commissioned sometime next year. All three destroyers will be assigned to Surface Development Squadron One (SURFDEVRON), an experimental Navy unit established in 2019 that includes a number of unmanned surface vessels, as well. SURFDEVRON was stood up, in part, in order to evaluate where the Zumwalt class will best fit among the fleet so that the $9.1 billion destroyers (with research and development costs included) can make the most of their capabilities.

The Zumwalt program has long struggled to achieve the Navy’s dreams for it. One of the destroyer’s main sore spots has been realizing a key aspect of its original core mission set: providing indirect fire support ashore. That mission has become less realistic and relevant as time has gone on, but it was the primary driver for equipping the class with two large 155mm Advanced Gun Systems (AGS) that take up roughly the forward third of the ship. Those guns have been abandoned due in part to their ammunition costing upwards of $800,000 a round.

What is now set to take their place are much more advanced, longer-ranged, and arguably more relevant weapons — hypersonic missiles. These will come from the Navy’s Conventional Prompt Strike (CPS) program. CPS seeks to integrate up to 12 hypersonic boost-glide vehicle-equipped missiles that the service is jointly producing with the Army into the hulls of all three Zumwalt-class destroyers. You can read in detail about Zumwalt’s relationship to the Conventional Prompt Strike program in this past War Zone piece.

The main obstacle in reaching this goal had been finding the necessary real estate aboard the vessel to house these missiles as Zumwalt’s existing Mk 57 Vertical Launch System (VLS) arrays are too small to do so. To address this, the Navy plans to install new Large Missile Vertical Launch Systems to accommodate the weapons.

Official Lockheed Martin renderings show four of these Large Missile Vertical Launch System cells in place of one of the two Advanced Gun Systems (AGS) currently installed on each ship. Each one of these cells is expected be able to hold three CPS missiles inside an Advanced Payload Module.

The Navy repeatedly said that the Zumwalt and its sister ships will lose both their guns as part of the process of integrating the CPS missiles and their launchers. It is therefore unclear whether the Lockheed Martin concept art, which shows the retention of at least of one of the AGSs, reflects the final expected configuration, but that seem highly unlikely and the art could have been pre-decisional and conceptual in nature.

The Army is also in the process of developing a ground-launched version of this missile, now nicknamed the Dark Eagle, which it expects to begin fielding next year. It would seem that the Navy is working to do the same with its version for the Zumwalt and its sister ships soon after. The Navy ultimately plans to arm its forthcoming Block V Virginia Class submarines, each of which will feature a Virginia Payload Module (VPM) with four large vertical launch tubes, with the CPS missiles, at least as an option, too.

USNI News reported that Zumwalt will go into the dry dock in late 2023 for an 18-month maintenance availability and will then be outfitted with the hypersonic missiles in Fiscal Years 2024 and 2025, supporting the hopes of Vice Adm. Johnny Wolfe, head of the Navy’s strategic systems programs, to deploy the system aboard DDG-1000 for testing by 2025. The Zumwalt-class destroyers will be the first Navy platform to field the missiles, which will concurrently aid in focusing the class’s overall revised mission. The Army states LRHW will have a range of at least 1,725 miles, which would give Zumwalt class the longest standoff conventional strike reach of any vessel in the Navy, at least for some time.

“We intend to outfit the Zumwalt class with Conventional Prompt Strike in the years ahead,” Paparo said. “We intend to upgrade its mission systems, we intend to employ its stealthy capabilities, its passive detection, its well deck, the ability to integrate undersea unmanned capabilities, surface unmanned capabilities, and to really use it as an all-domain platform that can collect, it can sense, it can execute rapid, disorienting fires and can do so in contested environments to be a difference maker and an enabling capability.”

Paparo’s menu of upgrades and mission focus pivots really paint a picture of a very different ship than what the Navy originally asked for, but it is certainly a more relevant one, integrating many of the Navy’s ‘bleeding edge’ surface warfare initiatives. Still, there are only three of these ships and they have gobbled-up huge sums of money as it is. Major investment will now be needed to adapt them to these prescribed mission sets, but the Navy appears to be confident that doing so will be worth it as a major upgrade initiative has emerged that could see all this, and possibly more, come to pass.

On Nov. 17, just a week after Zumwalt returned home from its deployment, the Navy separately released a tentative request for information from industry to conduct market research for an improvement program dubbed the Zumwalt Enterprise Upgrade Solution (ZEUS). Initiated by Naval Sea Systems Command, the notice explains that “potential elements being considered in the upgrade” include the Surface Electronic Warfare Improvement Program (SEWIP) electronic warfare system, the anti-submarine warfare system AN/SQQ-89, and the Cooperative Engagement Capability networking package meant to better share data and incorporate fires with other platforms.

The service’s notice also says that “several assumptions and constraints of the ZEUS concept” that should be taken into account include a stipulation citing that “topside design impacts should be minimized,” that Zumwalt‘s mission will remain surface strike, and that the ship’s “AN/SPY-3 radar would be replaced with the AN/SPY-6(v)3,” which is a possibility The War Zone was first to report on in the past. Responses are due Dec. 16, though ZEUS is very much in its early stages and it’s possible that the Zumwalt class may never even receive the upgrades posed. It’s also unclear if any of the elements listed presently exist aboard Zumwalt as the Navy has stripped the destroyer of a number of its capabilities over the years to grapple with cost overruns. It’s worth noting, too, that if ZEUS is to come to fruition, these upgrades on top of Zumwalt‘s new hypersonic missiles will surely amount to a significant investment.

It seems that Zumwalt’s Pacific deployment was a major factor in moving the class forward and understanding what has to change, what should change, and what can wait in terms of capability and sustainment upgrades.

Assigned to Task Force 71/Destroyer Squadron (DESRON) 15, the Navy’s largest forward-deployed DESRON and the Japan-based U.S. 7th Fleet’s principal surface force, Zumwalt reportedly spent most of its recent deployment exercising the basics of surface warfare. According to Defense News, this included simulated maritime fires training with U.S. Air Force B-1 bombers and the 613th Air Operations Center in Hawaii, as well as a Japanese destroyer and the Commander Task Force-71 staff out of Japan.

Evaluating the destroyer’s combat system performance in the 7th Fleet, which will be its main theater of operations, was the primary focus of these simulations. Defense News went on to note that air operations with unspecified U.S. Army units as well as ‘development work on a novel mine countermeasure concept with a forward-deployed explosive ordnance disposal unit’ were also among the activities conducted during the destroyer’s recent deployment.

Familiarizing the crew with Zumwalt’s communications systems and logistics was reportedly an important focus as well, with the first preventative maintenance availability outside its San Diego homeport having been carried out in Hawaii. According to Defense News, this allowed crew members to get a better idea of the expeditionary maintenance needs that may arise on future operational deployments for Zumwalt.

“This year was a first step,” Paparo said. “It was exciting. We tested her, we wrung out its crew, we built confidence in our ability to sustain her, we put her to sea for long periods of time, we gained confidence in her propulsion systems and our weapon systems, and now she’s back in for an upgrade so that she can meet the potential that that hull portends for the government.”

The post Navy’s Stealth Destroyers Could Get Massive Upgrades Beyond Hypersonic Missiles appeared first on The Drive.