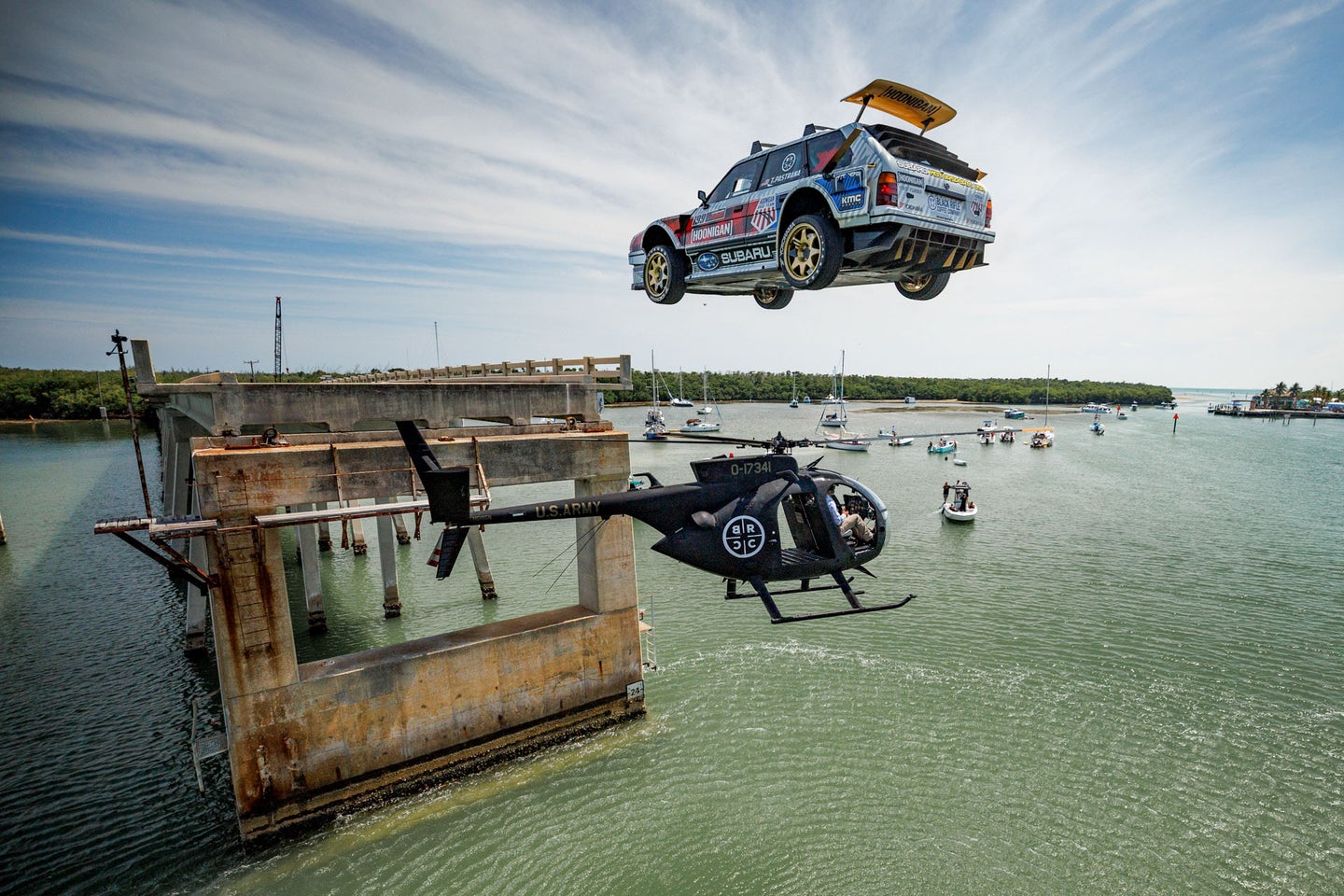 Good news, people: We live in a world now with two distinct flavors of amazing stunt-driving videos. First, there’s the new Electrikhana, which you may have seen here. That new series of stunt driving videos are helmed by Ken Block and his newfangled, highly powerful and ultra-expensive Audi Hoonitron.

The original—and still regarded by many as the best—Gymkhana remains. And it’s only getting better. On Tuesday, the series released its 12th installment (not counting the original “practice” video) featuring Travis Pastrana and his unique machine, the ski team-liveried Subaru GL wagon dubbed “The Family Huckster.”

Far from the slopes in sunny Florida, Pastrana’s lean carbon-fiber framed machine boasts 865 horsepower, a 165-mph top speed, and active aero. If you’re wondering, “Will we get to see all three in a single video?” The answer is, “Yes. Of course you do.” Much like Block’s new Electrikhana video, and the Gymkhana series writ large, no tire survives.

Pastrana escapes the beach in the Huckster and heads toward downtown Fort Lauderdale, Florida, with predictable results downtown. The Huckster slides through the city, circling a jetski-turned-scooter (it’s Florida, after all) and a balancing monster truck driven by Ryan Anderson.

There are plenty of drag races, because Florida’s pencil-straight roads are purpose-built for long drags—just not at these speeds. First, Pastrana races YouTuber Cleetus McFarland in his 3,000-HP El Camino. A drag race with a jet is next—because that happens a lot—en route to the Huckster’s 165-MPH top speed, which is visible in the video. Of course, dragging along the highway isn’t good enough for the Gymkhana’s high-speed series isn’t enough; jumping is a must-do. Pastrana leaps the Huckster traveling faster than 130 MPH with a spine-shattering landing and then jumps a helicopter over a drawbridge.

If all of this sounds ludicrous, it is. It’s Gymkhana’s MO, after all. It wouldn’t be Florida without a water feature, and Pastrana manages to skip the Huckster like a rock over water for more than 100 feet.

It’s a wild ride and the ad at the end for the new Subaru WRX is worth watching at the end. Earlier this year, we caught up with Pastrana as he was racing in Houston and he tipped the Huckster’s wild ride for us then: “It’s the most insane thing I’ve done in a car, ever. I can’t believe what (Gymkhana director Brian) Scotto can come up with. It’s insane.”

Florida and insane? Checks out.

The post New Gymkhana Video Asks the Question: What Can’t Travis Pastrana Jump in a Subaru? appeared first on The Drive.