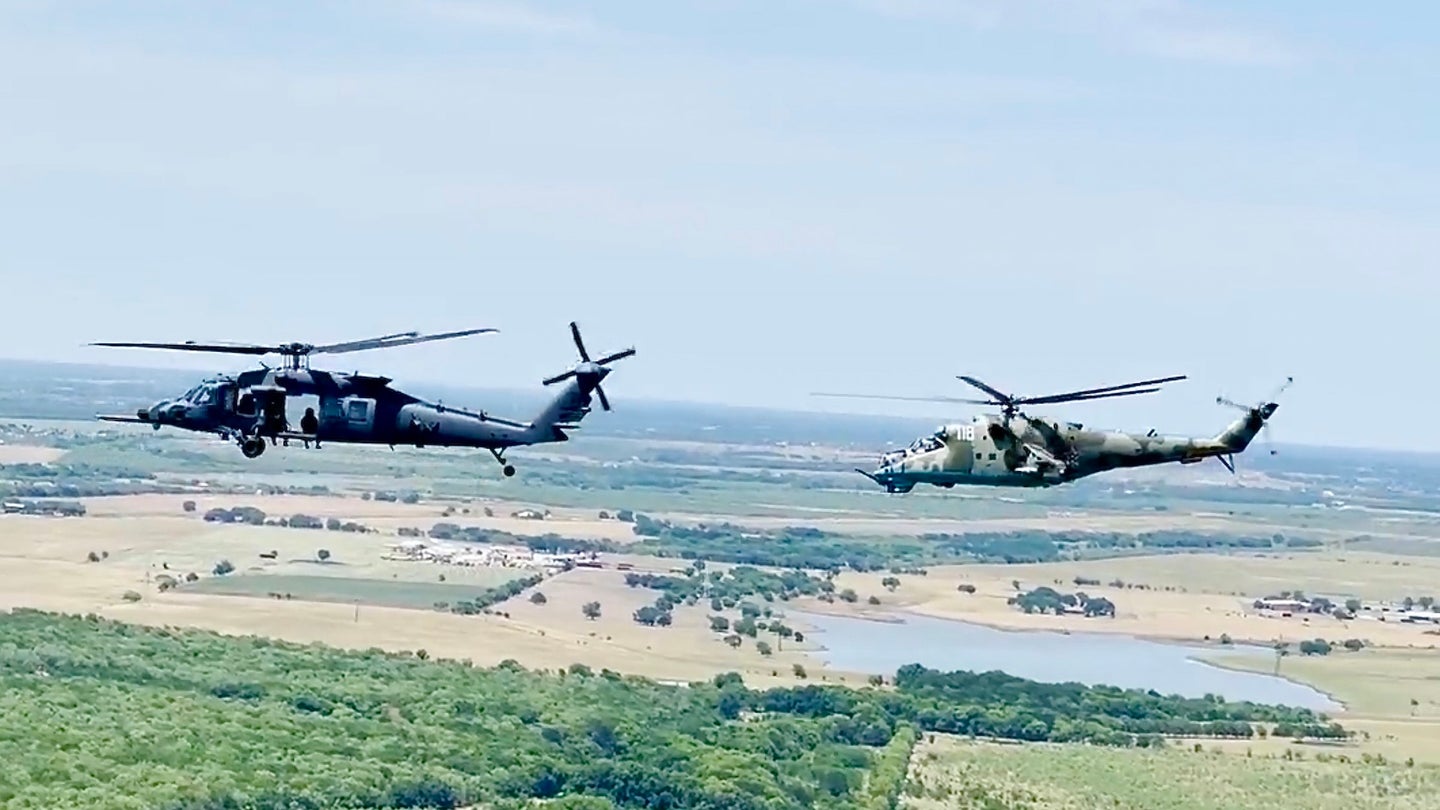 USAF pilots from the 41st Rescue Squadron stationed at Moody Air Force Base in Georgia, traveled to Lancaster, Texas, for the exercise. Readers can watch the full highlight video shot during it below.

In the footage, we see both helicopters flying from a number of different viewpoints. Once airborne, the HH-60W and the Mi-24 practice air-to-air maneuvers. Incredible as it is to see these two helicopters together during aerial combat maneuvers training, the range of shots filmed gives this video the feel of a high-action movie. Watching both aircraft violently turn at speed from a pilot’s-eye-view, and from the perspective of crew members, is pretty exhilarating.

Simulating airborne combat maneuvers is vital for the 41st Rescue Squadron, which specializes in aircrew recovery. This can include infiltrating deep behind enemy lines to pluck downed pilots to safety. Roving enemy helicopters are a real threat to CSAR helicopters, and the Hind is a perfect example of what HH-60W crews could stumble upon and need to evade during a real mission. The squadron maintains a combat-ready status, with the ability to rapidly mobilize and deploy in support of both combat and peacetime search and rescue missions.

Sikorsky’s HH-60W Jolly Green II Combat Rescue Helicopter is an advanced and heavily missionized variant of the Army’s UH-60M Black Hawk helicopter. In 2014, the USAF awarded Sikorsky, which was subsequently acquired by Lockheed Martin, a $1.2 billion contract to produce a new combat rescue helicopter fleet that would replace the service’s aging HH-60G Pave Hawk. Since then, the Air Force’s requirements have shifted and the service now says it plans to cut its planned total purchases from 113 to 75, halting orders after purchasing a final batch of 10 HH-60W helicopters in the 2023 Fiscal Year.

A significant part of the Air Force’s reasoning here relates to the anticipated utility of HH-60W helicopters in future combat search and rescue (CSAR) missions. This is something we have questioned repeatedly before and the service has acknowledged in the past that the helicopters will need substantial additional upgrades before they can truly be expected to perform their core mission set in an “effective” manner.

In a hypothetical conflict with China or Russia, sending manned conventional helicopters deep into contested and well-defended airspace could be deemed too risky. Considering the large distances involved in a potential peer state conflict, such as one in the Pacific, even getting there, and especially in time to affect a rescue, would be a questionable proposition for a standard helicopter like the HH-60W. Established breakthroughs in stealth technology may also offer a better solution for some of this mission set, as well, and the Air Force Special Operations CV-22 Ospreys, and those belonging to the USMC even, are better suited for some CSAR missions, especially long-range ones and those where time is absolutely critical (most of the time it is for this mission).

Regardless, with the USAF moving towards a fleet dominated by stealthy aircraft, which will increasingly possess longer ranges, how exactly CSAR will be performed at all has become a major question. If a B-21 Raider stealth bomber couldn’t survive in a certain contested area, how will a number of helicopters? Low flying tactics, careful mission planning with the latest intelligence, advanced self-defense countermeasures, and offboard support from various assets surely helps, but penetrating deep into contested areas against modern integrated air defense systems in slow-flying helicopters is quite the proposition to ponder. There have been decades of rumors and research about stealthy special operations transports that could potentially help with this problem set, which you can read about in our two-part series here and here. Even they would be only one part of a potential solution, if anything like them truly exists, and if they do, they would only exist in very small numbers.

Still, it’s also important to note that the USAF HH-60 CSAR community has contributed in many other ways beyond its core mission set over the years. In Iraq and Afghanistan, they were an amazing asset for medevac missions and saved many soldiers’ lives and limbs in the process, for instance. They’ve also been deployed to locations in East Africa in recent years.

The Mil Mi-24 attack and transport helicopter, developed by the Mil Helicopter in the Soviet Union during the 1960s, remains a fixture of the Russian military to the present day. It and its many variants are also extremely popular amongst other militaries and even paramilitaries around the world. Training against similar adversary aircraft U.S. pilots will likely face in combat adds important realism to everything from tests and exercises. Dissimilar Air Combat Training (DACT) teaches pilots how to engage adversary aircraft that look and fly differently, and are flown by pilots with unfamiliar combat doctrine. The Mi-24 is a heavier and faster attack-focused helicopter, with a greater number of armament combinations, including a cannon and the ability to carry air-to-air missiles, compared to the HH-60W, which is armed only with door guns. On the other hand, the HH-60W is lighter, smaller, and boasts a greater operational range than the Mi-24, due to its primary role as a search and rescue aircraft. It also has far superior avionics, enhanced situational awareness, and especially, much better countermeasures.

For the HH-60W, evasion is key here, which is an art form in itself. While air-to-air fighter tactics get all the attention, rotary-wing assets have their own air-to-air capabilities and considerations. For instance, the Marines teach an elite class to helicopter crews about how to evade aerial threats. This likely saved a lot of lives during the Bin Laden raid. You can read all about this skillset and its relation to Operation Neptune Spear in this past piece of ours. On the other hand, attack helicopters can act in a counter-helicopter role. Variants of the AH-1 Super Cobra and the more recent AH-1Z Viper can carry the AIM-9 Sidewinders and are also equipped with 20mm turreted guns, while AH-64 Apaches can be armed with FIM-92 Stingers and have their 30mm guns. All of these weapons can be used against threatening helicopters and low-flying aircraft. Even the AGM-114 Hellfire missile has proven very effective against slower, low-signature aerial targets. But for HH-60W, learning how to detect and outmaneuver the hind, as well as employ countermeasures to neuter its weapons employment capabilities, is key.

Having the opportunity to train with privately-owned Mil Mi-24 helicopters led the 41st Rescue Squadron to Lancaster, Texas. Two ex-Bulgarian Mi-24 helicopters, identifiable by their original ‘bort’ numbers white “118” and “120,” are stored at Lancaster’s Cold War Air Museum. The service has conducted “red air” aggressor training with these helicopters outside of the Nevada Test and Training Range (NTTR) at least once in the past. The Mi-24 bearing the “118” marking, seen in photos and videos on the Lancaster Cold War Air Museum’s Facebook page, was clearly used during this latest exercise. Mi-24s are also used by the Marine Corps and the Army as red air aggressors.

Members of the 41st Rescue Squadron spoke positively about the value of air combat maneuver training with realistic aggressor aircraft when interviewed.

“The HH-60 Whiskey has never been put into this kind of scenario,” Captain Tyler Hudson remarked. “This is the first time we’re testing the Whiskey out against…a Hind. It’s really proving our techniques…and getting us one step closer to be[ing] comfortable in taking it into combat.”

As Major Matthew Keough stressed, training with a Mi-24 helicopter is invaluable for the Squadron. “It’s a threat replication we can’t get anywhere else, there are only a few [Mi-24s] that exist in the country and we were able to come out here and fight against an actual threat helicopter, so we get an accurate representation both visually and aerodynamically of a threat helicopter we can’t get anywhere else.”

“It’s very easy during normal training sorties to do this choreographed, pre-brief scripted kind of thing in your aircraft and within the formation,” Keough explained. “It’s much more difficult when you add in that third player, in this case, a Hind… This training is an opportunity to really bolster people’s confidence…that could be the difference between a formation coming back [from a mission] or not.”

The post New HH-60W Rescue Helicopter Had Its First Dogfight With An Mi-24 Hind appeared first on The Drive.