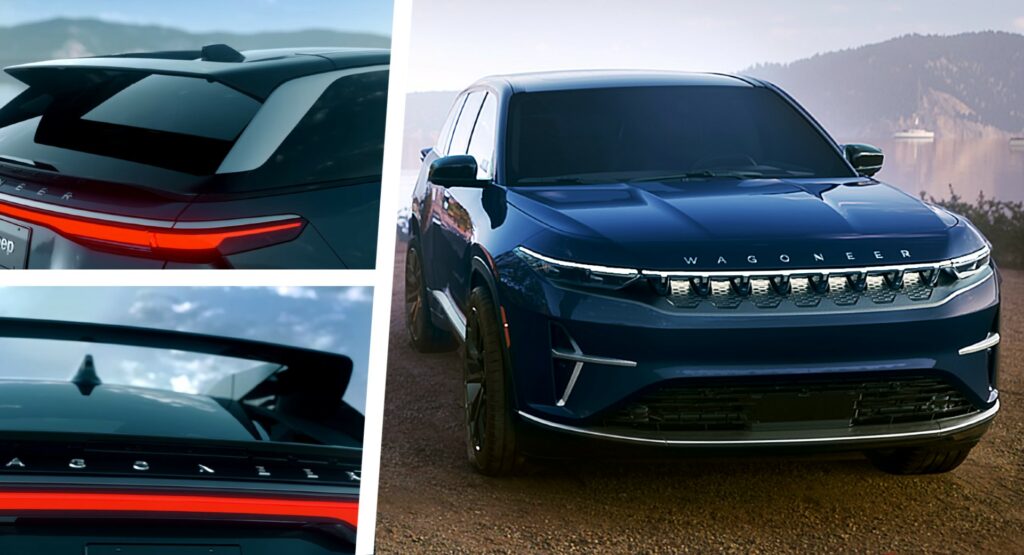 Jeep made headlines today by announcing its electrification plans that include the introduction of four new EVs within the next few years. Among them is the Jeep Wagoneer S, a fully electric, premium midsize SUV that was previewed today through a series of renderings prior to a full unveiling in 2023. The EV will be a global model, with production and sales starting in 2024.

Despite sharing its name with the ICE-powered Jeep Wagoneer and Grand Wagoneer (plus the longer L variants) full-size SUVs, the new member of the family is radically different, not only in terms of powertrain but also in styling and market positioning. The Wagoneer S has a sportier flair with a greater focus on aerodynamics and a smaller footprint. According to Ralph Gilles, the “S” represents speed, striking (design), and sexy. 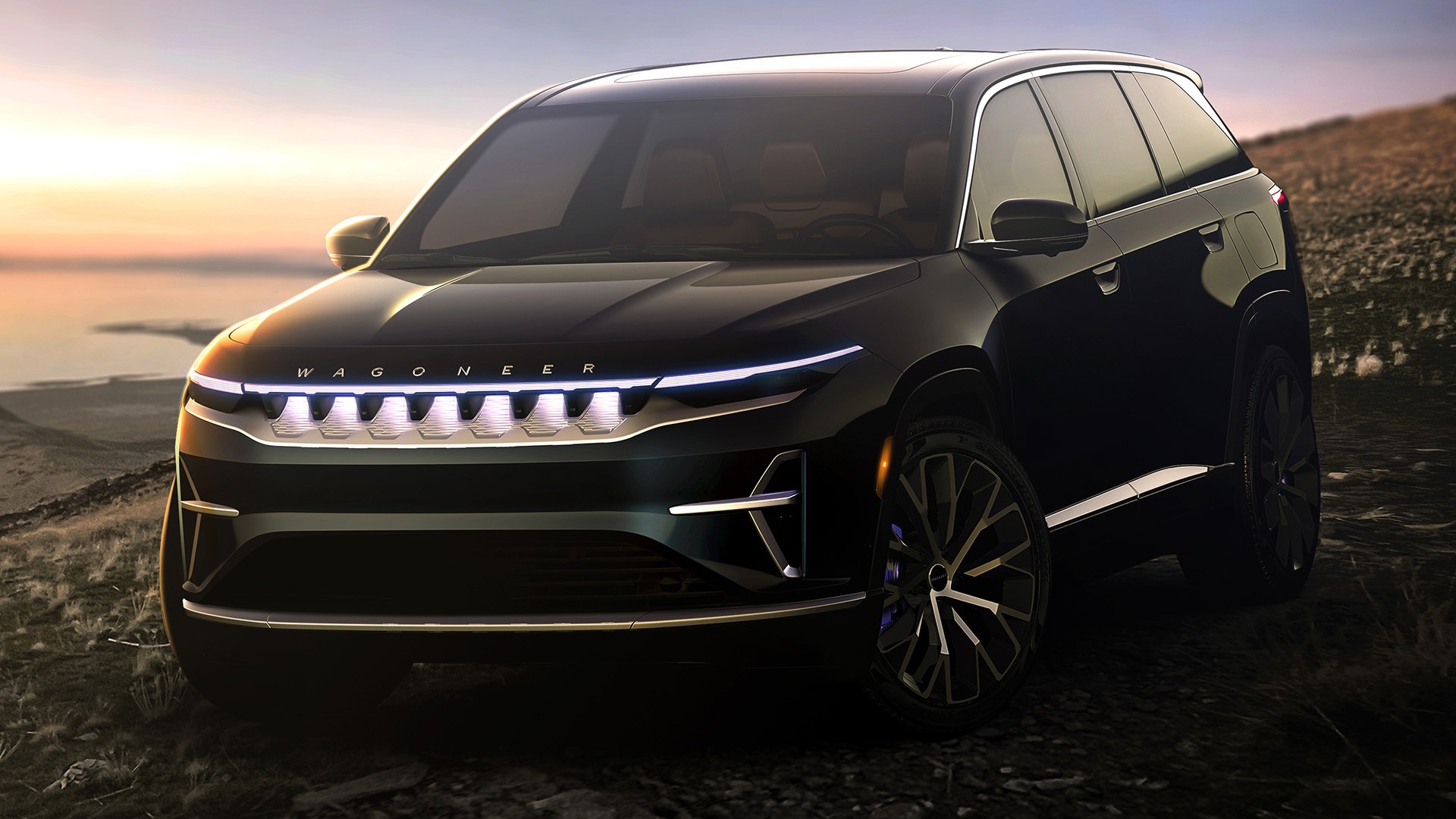 At the front, the highlight is the new illuminated grille retaining the seven slits but in a different manner. The grille is connected to the slim full-width LED headlights below the Wagoneer lettering. This setup somehow brings to mind the design language of Range Rover. The front bumper has a ‘‘Stellantis’ group feel to it in terms of styling, with triangular side intakes and a large central opening featuring silver or copper accents.

Moving on to the profile, the massive alloy wheels are filling up the boxy wheelarches that look similar to other Jeep models. What is different than the rest of the range is the sleeker greenhouse with a chrome accent highlighting the greater incline of the rear pillars. This where the signature design element of the Wagoneer S resides – a very large rear wing, thanks to the offset created by the inclined rear windshield. The rear end gives plenty of Range Rover Velar vibes, with full-width LED taillights and a sculpted tailgate.

We don’t have any pictures or renderings of the interior, but Christian Meunier, Jeep CEO, said it will offer users a premium experience with plenty of technology and “high-quality craftmanship”. 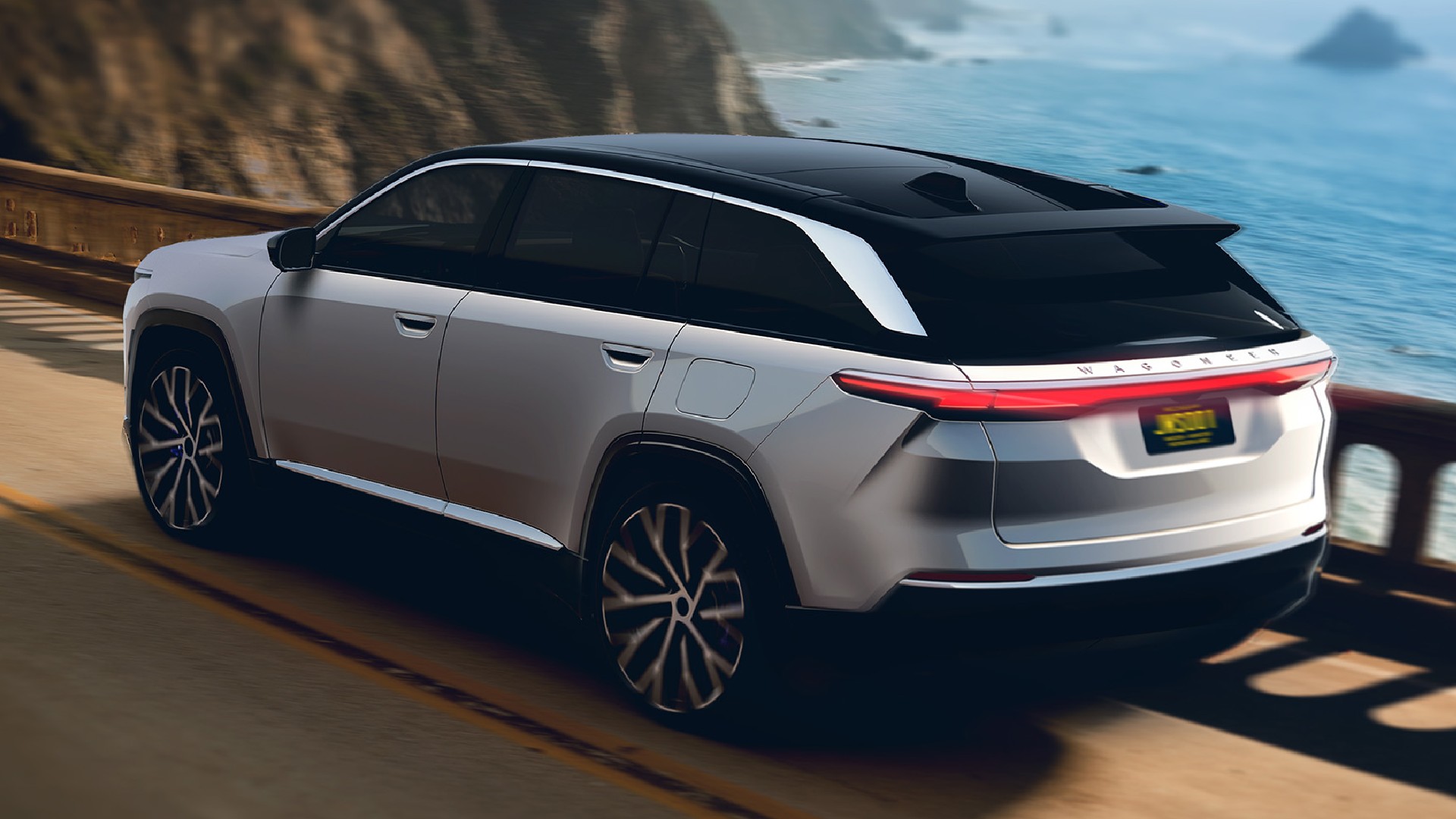 In terms of the electric powertrain, Jeep announced a targeted output of 600 hp (447 kW / 608 PS). That will be enough for a 0-60 mph (0-97 km/h) acceleration time of around 3.5 seconds, similar to the discontinued Hellcat-powered Jeep Grand Cherokee Trackhawk. The SUV will come standard with 4×4 capability, most likely thanks to a dual electric motor setup. It will feature Jeep’s all-terrain management system and brand-focused technology, making sure it distinguishes itself from other Stellantis products. Speaking of which, Jeep didn’t reveal which architecture will underpin the EV-only Wagoneer S, but what it did say is that it’s targeting a range of 400 miles (644 km).

We’ll know more about the Jeep Wagoneer S in 2023, when it will be detailed in its final production form. Jeep isn’t 100% sure about the name, which might change in the future. The first examples of the new EV will reach US dealerships in 2024, with other major markets including Europe to follow later.