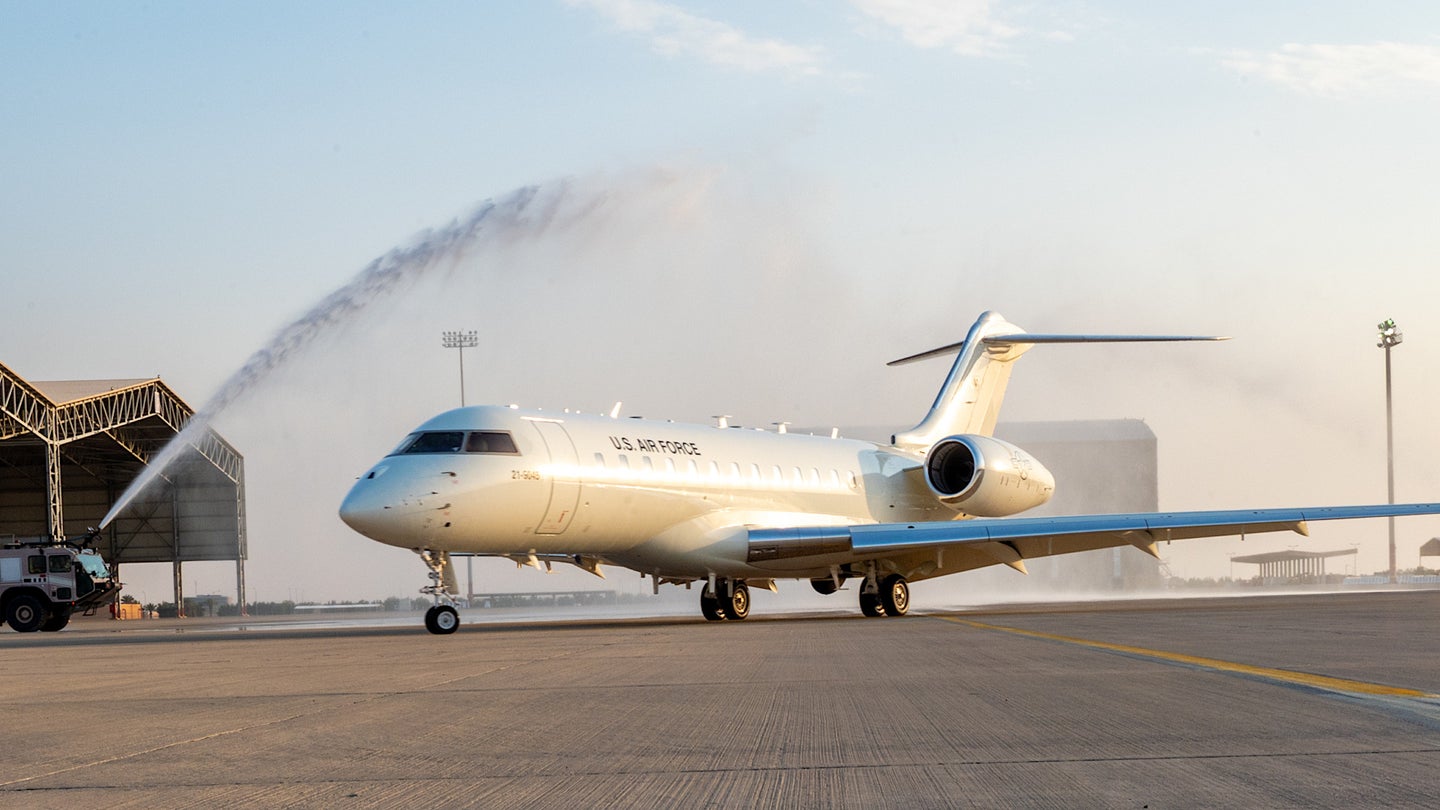 The U.S. Air Force’s newest E-11A Battlefield Airborne Communications Node, or BACN, aircraft, is now operating in the Middle East. The service has confirmed that the jet, the first of six additional E-11As it expects to receive by the end of 2026, has now formally joined the 430th Expeditionary Electronic Combat Squadron at Prince Sultan Air Base in Saudi Arabia.

The Air Force’s newest E-11A is a heavily modified Bombardier Global 6500 business jet. The service’s three other E-11As are based on BD-700 and Global 6000 types.

All of the E-11As are fitted with the BACN package, which is a highly specialized communications gateway node designed to create an ‘active net’ over the battlespace and quickly transfer data sent using a variety of distinct waveforms between different aerial platforms and forces on the ground/surface. With these capabilities, the aircraft can also serve as valuable communications relay nodes. You can find out more about BACN and its history in this past War Zone feature.

Canadian firm Bombardier Defense delivered 21-9045 to the Air Force in September of this year, bringing the total size of the E-11A fleet to four. The service had announced its plans to acquire six new E-11As in February 2021.

The acquisition plans followed the loss of one of the service’s four original E-11As in a crash in Afghanistan in 2020. The Air Force has also since retired four EQ-4B Global Hawk drones equipped with the BACN communications package, which are now set to be converted into the RangeHawk configuration to support hypersonic testing.

Until 2020, the 430th Expeditionary Electronic Combat Squadron, the Air Force’s only operational E-11A unit, had been forward deployed at Kandahar Airfield in Afghanistan. As part of the withdrawal of U.S. forces from that country, it was relocated first to Al Dhafra Air Base in the United Arab Emirates (UAE) and then, at least in part, to Prince Sultan Air Base.

Bringing the size of the E-11A fleet back to four can only help expand the Air Force’s ability to employ these jets – the very definition of a high-demand, low-density capability – across the Middle East and in adjacent regions, such as the Mediterranean Sea. These aircraft have to be regularly rotated back to the United States for maintenance and other work, and with so few of them, training new pilots to fly them largely occurs on the job in theater.

With the end of active U.S. military operations in Afghanistan, at least that are publicly acknowledged, the E-11As have been very actively employed for various other operational and training tasks while flying from the Arabian Peninsula. This has included supporting numerous exercises off the coast of Israel, among other activities, including one just recently, as well as ongoing U.S.-led coalition operations in Iraq, as you can read more about here. BACN jets would be especially valuable in any future multi-national coalition operations in the region given their ability to ‘translate’ between various platforms that may not otherwise be able to directly communicate with each other and help with creating a more complete networking situation in a particular region. This can include helping low-flying and ground-based personnel stay connected even in steep terrain.

Moreover, in 2021, at least one E-11A was involved in a combined U.S.-UAE exercise focused on employing “multiple platforms… together to execute and refine tactics, techniques and procedures to counter Unmanned Aerial System threats,” according to the Air Force. Exactly what role the BACN jet played in this case is unclear. However, the exercise does underscore the very real and still evolving threat that drones, especially those employed by Iran and its regional proxies, pose to U.S. forces, as well as their allies and partners, in the region. As The War Zone regularly reports on, uncrewed systems present increasingly significant dangers to American forces abroad and at home, as well as to civilian targets outside of conventional battlefields.

The capabilities that BACN and the E-11A fleet provide mean that the aircraft could be very useful for supporting operations elsewhere in the world. This includes the vast expanses of the Pacific, where the U.S. military is increasingly focused on preparing for a potential future high-end conflict with China. The United States, together with its NATO allies, has also been expanding its force posture in Europe in recent years to help deter Russian aggression, a broad effort that has taken on new significance and has expanded in light of Russia’s ongoing war on Ukraine.

With this in mind, it’s not surprising that the Air Force is now planning to establish a new base for the E-11As in the United States at Robins Air Force Base in Georgia, which will be overseen by the 319th Reconnaissance Wing headquartered at Grand Forks Air Base in North Dakota. The decision to establish a U.S.-based E-11A squadron also comes as the E-8C Joint Surveillance Target Attack Radar System (JSTARS) battle management aircraft fleet is being retired. Robins is currently the Air Force’s main E-8C base.

For the moment, though, the Air Force’s E-11A fleet remains focused primarily on operations in the Middle East, as evidenced by the arrival of 21-9045 in the region.