Next Generation AbramsX Tank Will Have Hybrid Power Plant 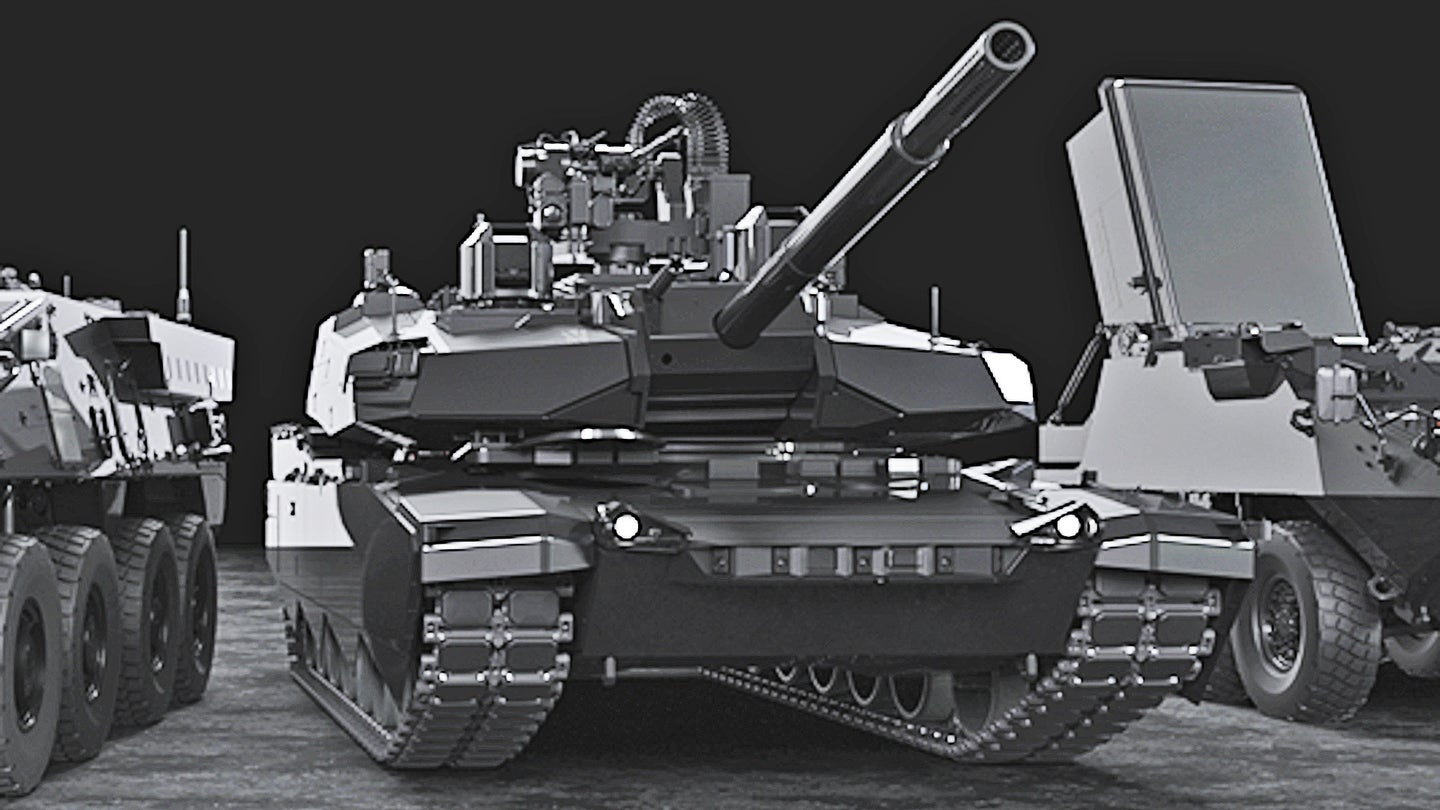 General Dynamics Land Systems has offered new details about its next-generation M1 Abrams tank concept, as well as a clearer rendering of the vehicle. The company has now confirmed that the design will use a hybrid conventional-electric propulsion system, along with being lighter weight, having a smaller crew size, and featuring crewed-uncrewed teaming and artificial intelligence-driven capabilities, among other things. Hybrid propulsion was one of the features that we noted was likely to be found on what is now being referred to as the AbramsX, as you read about more in our initial reporting on this tank concept here.

The additional information about the AbramsX was provided in a press release that General Dynamics Land Systems put out yesterday ahead of the Association of the U.S. Army’s (AUSA) main annual convention and trade show, which opens next week in Washington, D.C. The company first teased the next-generation Abrams design back in June.

The new rendering of the next-generation M1 Abrams, which the company describes in its current form as a technology demonstrator, was shown alongside new views of the StrykerX, the Stryker Leonidas, and the TRX Breacher designs. StrykerX is an advanced technology demonstrator with a hybrid diesel-electric power pack and other features that could go into future versions or derivatives of the 8×8 Stryker wheeled armored vehicle family. Stryker Leonidas is a variant of the Stryker with a high-powered microwave directed energy weapon, which you can read more about here. TRX Breacher is a combat engineering configured version of the TRX uncrewed ground vehicle (UGV).

From the renderings we’ve seen, the AbramX demonstrator features a turret and hull that have at least a significantly altered external shape compared to the legacy M1 design. This would align with efforts to reduce the weight of the vehicle to improve its mobility, both on and offroad, as well as its ability to be carried inside various transport assets.

Per the U.S. Army, the M1A2 System Enhanced Package Version 3 (SEPv3) tank, the most modern version of the Abrams currently in service, tips the scales as 73.6 tons, more than 10 tons heavier than the original M1. The tank’s weight, coupled with its physical dimensions, impose limits on how many of them can be carried inside ships or planes. The latest version of the Abrams is too heavy to be carried by certain landing craft – a key factor in the Army’s acquisition of new Maneuver Support Vessels (Light) – and there have long been concerns about how the tank’s weight and physical size limit its ability to cross many bridges, especially in Europe.

It’s also no secret that the Army, among others, has been increasingly interested in hybrid conventional-electric propulsion systems for tanks and other vehicles to help ease logistics issues and reduce operating costs. The gas turbine propulsion system that the M1 Abrams family currently uses is well known to be fuel-hungry, maintenance intensive, and loud, too. The M1’s fuel consumption rate is one of the design’s least attractive features and units equipped with these tanks require very robust logistics trains.

As General Dynamics notes in its press release, a hybrid conventional-electric propulsion system has other potential benefits, including the ability to enable operations from static positions and potentially on the move, likely at low speeds over shorter distances, in a very quiet all-electric mode. This would help the vehicle’s crew avoid detection, and possibly gain the advantage over opponents, as well as save fuel.

The mention of a reduced crew size is immediately interesting given that the U.S. Army has long stuck with a general four-person main battle tank crew construct – commander, gunner, loader, driver – as have many other western militaries. This is in contrast to the Soviets, and now the Russians, as well as the Chinese, who have generally developed main battle tanks around a three-person crew, using autoloaders to eliminate the need for an additional individual to perform that task.

The video below offers a very general overview of the layout of an M1 Abrams-series tank, including its crew layout.

Though General Dynamics Land Systems has not yet said how the crew in the AbramsX has been trimmed back, removing the loader position is the most immediate and practical option. Doing this would have helped with the rescaling of the turret, which in turn, would have contributed to efforts to reduce the overall weight and size of the tank. It’s unclear whether or not more substantial changes have been made in how the crew actually rides within the vehicle.

As The War Zone reported when General Dynamics Land Systems first revealed the next-generation Abrams concept, the vehicle looks to feature a variety of new weapons and sensors. This includes a 30mm cannon-armed Kongsberg Protector RS6 Remote Weapon Station (RWS) on top of the turret, what may be an advanced 120mm main gun, a version of the Trophy active protection system (APS), and new electro-optical/infrared sensor turrets for the commander and gunner.

The new rendering also shows what appear to be cameras arrayed around the hull, which are likely tied in with a distributed aperture system (DAS) that could offer at least near 360-degree situational awareness to the crew even while they are safely buttoned up inside. These feeds could potentially be pumped right into the visor of a helmet, very broadly akin to how the DAS works on the F-35 Joint Strike Fighter, allowing crew members to “see” through the hull, and be combined with augmented reality features for additional functionality. The U.S. Army, among others, is already looking to field similar capabilities on existing armored vehicles, as well as in forms that can be employed by dismounted infantry units. DASs for ground vehicles, like Iron Vision from Israeli defense contractor Elbit, are already in development.

Regardless of the AbramsX’s specific features and capabilities, it is important to stress again that General Dynamics, at least so far, has presented it purely as a technology demonstrator. The company’s press release says that it could “serve as a bridge from Abrams SEPv3 and SEPv4 to a future tank.” Renderings that have been shown of the still-in-development SEPv4 variant make clear that it will be very similar in size, shape, and overall design to the SEPv3.

At the same time, the next-generation Abrams concept has a number of features that could make it very attractive to the U.S. Army, as well as other military forces, going forward. Even just a lighter weight, more mobile, and more fuel-efficient Abrams derivative that lacks the more advanced features of the AbramsX could find space on the export market as an alternative to ever-larger, more complex, and expensive Western tank designs.

Russia’s all-out invasion of Ukraine earlier has reinvigorated debates about whether or not tanks, more generally, will continue to be relevant on future battlefields. Though infantry anti-tank missiles and other shoulder-fired anti-armor weapons have certainly been a major factor in the conflict, both sides have and continue to make heavy use of tanks and other heavy armored vehicles.

More details about the AbramsX, as well as General Dynamics Land Systems’ other advanced development efforts, are expected to come next week during the AUSA convention, and it will be interesting to learn more about this design and the company’s plans for it.

The post Next Generation AbramsX Tank Will Have Hybrid Power Plant appeared first on The Drive.