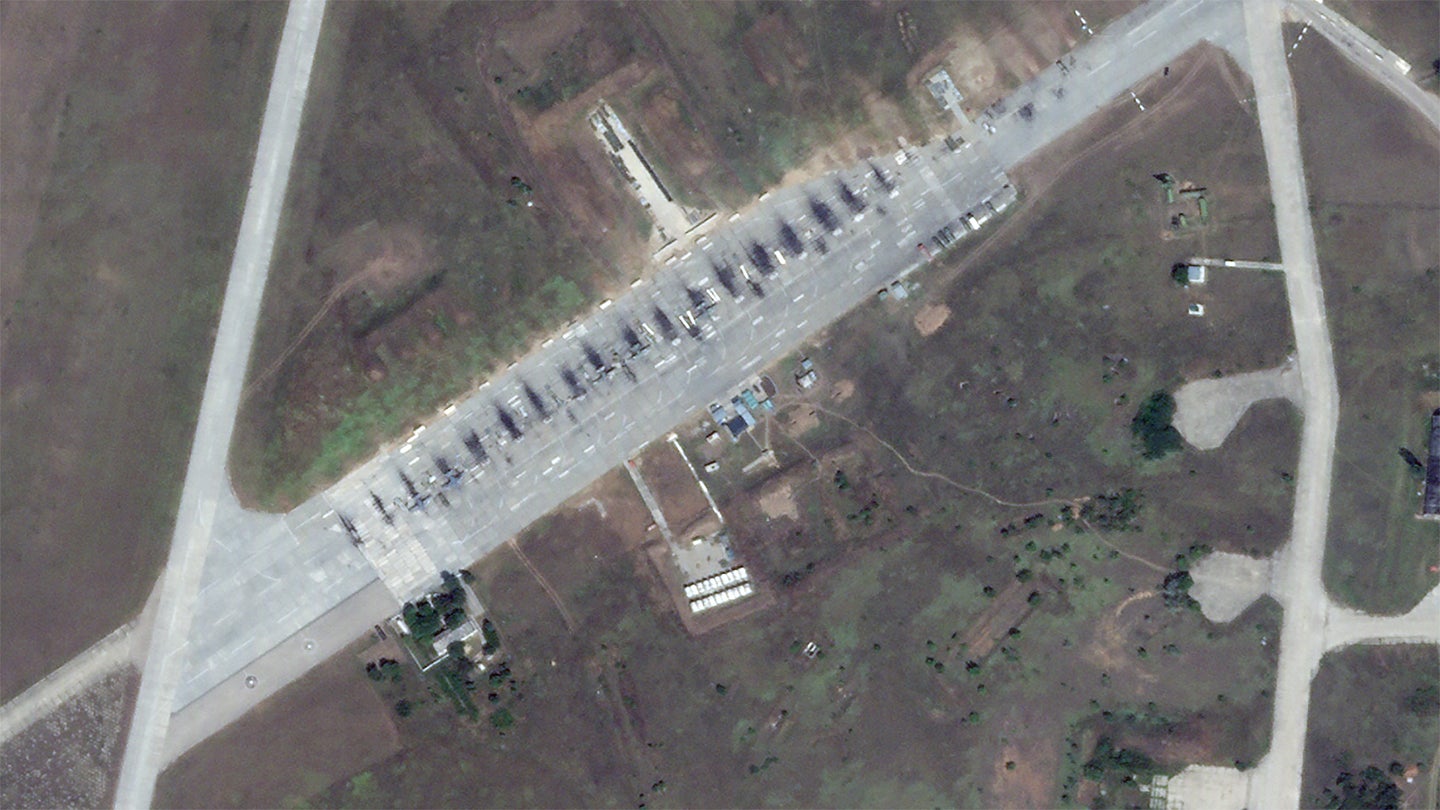 A view of an apron at Russia's Gvardeyskoe Air Base on the occupied Crimean Peninsula from a satellite image taken on August 17, 2022.

New satellite imagery does not appear to show any apparent damage to aircraft, structures, or any other major materiel at Russia’s Gvardeyskoe Air Base on the occupied Crimean Peninsula a day after reports that smoke was seen rising from the facility. This is despite a new report that indicates Ukrainian authorities have claimed responsibility for the purported incident at this base.

Russian media outlets reported sightings of smoke above Gvardeyskoe – also sometimes written Gvardeyskoye, Hvardeyskye, or Hvardiiske – yesterday, citing unnamed local witnesses. At the time of writing, no pictures or videos of smoke or fire at the base, or anything out of the ordinary, that were purported to have been taken by individuals in the area appear to have emerged online. Authorities in Russia haven’t issued a statement of any kind regarding the reported incident, either. This is all in stark contrast to the immense amount of on-the-ground visual evidence that appeared on social media, together with official Russian statements acknowledging that something happened, that followed a reported attack on an ammunition dump in Crimea’s Dzhankoi region yesterday and another at Saki Air Base on the peninsula last week.

A satellite image The War Zone has now obtained from Planet Labs of Gvardeyskoe that was taken today does not show any signs of a major incident at the base. The main unit at there is the 37th Composite Aviation Regiment, which flies Su-24M Fencer swing-wing combat jets and Su-25SM Frogfoot ground attack aircraft.

The Planet Labs image also shows Su-34 Fullback combat jets at Gvardeyskoe, which can be seen in other imagery of the base predating Russia’s all-out invasion of Ukraine in February. What appears to be a member of the Ilyushin Il-18/20/22 Coot series, the general state of which is unclear and that may not be in active service, is parked in a revetment at the southwestern end of the base, as well. The Coot family includes passenger and cargo transport types, as well as variants configured for intelligence, surveillance, and reconnaissance (ISR) missions.

There is significant discoloration visible on the tarmac at one of two main aprons at the base, but this appears to simply reflect normal flying operations. Older satellite imagery, including as far back as last year, shows similar blackened areas, which appear to have been caused by normal seeping of various fluids and engine run-ups.

In addition, a number of what look to be Su-25SM aircraft can be seen parked in this area, but none of them have any obvious damage. There is no other abnormal activity can be seen, such as the presence of fire trucks or other first responders that were plainly visible in separate imagery of the aftermath of last week’s incident at Saki Air Base.

Another smaller apron at the northeastern end of the base, as well as other key facilities, including multiple large storage areas, look to be entirely untouched, as can be seen below.

What at first glance looks as it if might have been a patch of burned grass at the base actually appears to more likely just be a shadow cast by a cloud.

If there is any apparent damage at the base readily visible at all, it appears to be to calibration targets at the southeastern end of the facility of a type often used to test cameras on spy satellites. The apparent damage here looks to be at least a number of days hold, however. A review of other older satellite images shows that the target was only installed at the base sometime in July for unclear reasons.

What did or did not happen at Gvardeyskoe remains curious, especially in light of a report from CNN today. The outlet said an anonymous Ukrainian official had provided a copy of an internal report claiming responsibility for the purported incident at the base, as well as the apparent attacks on the ammunition storage facility in Dzhankoi and Saki Air Base.

Separate reports yesterday cited Ukrainian officials as claiming that a team, possibly made up of Ukrainian special operations forces, local partisans, or a mixture of both, had attacked the ammo dump. Similar reports emerged after the blasts at Saki Air Base. For their part, after initially suggesting what happened was an accident, Russian officials said that the explosions at the ammunition storage site were the result of sabotage.

Russian authorities subsequently claimed, without providing hard evidence, to have ‘neutralized’ a six-person Islamist terrorist cell over the incident in Dzhankoi. Video of a purported raid by Russia’s Federal Security Service, or FSB, on this group’s safehouse shows a dubious array of pro-Ukrainian and Nazi paraphernalia, including what appears to be a commercial printing of Adolf Hitler’s Mein Kampf and hobbyist books on the World War II German military and Nazi regalia. The Kremlin has and continues to make entirely unsubstantiated claims about the prevalence of ‘Nazism’ at the highest levels of Ukraine’s government as a key justification for its invasion.

All this being said, it is certainly true that the Ukrainian military and intelligence services conduct extensive activities, to include sabotage efforts, in areas of the country that Russia occupies, as well as inside Russia proper. Units tasked with these missions are understood to work or at least coordinate with local partisans. You can read more about all this in The War Zone‘s past exclusive interview with members of one of these specialized Ukrainian contingents, known as the Shaman Battalion, here.

Beyond that, teams working on the ground remains one explanation for how Ukrainian forces might be able to launch attacks on targets deep in Crimea. Gvardeyskoe and Saki Air Bases, and the ammo dump in Dzhankoi, are all situated well beyond the reach of the long-range strike capabilities currently known to be available to Ukraine’s military, such as U.S.-supplied High Mobility Artillery Rocket Systems (HIMARS). Ukrainian infiltrators would not necessarily have to get directly into the bases in question, either, and could use armed drones or even anti-tank guided missiles to carry out stand-in attacks from the relative safety of a nearby location.

That Ukrainian forces may be utilizing some other kind of long-range strike capability, such as larger explosive-laden drones, or a more traditional weapon system that is not currently known to be operational.

All told, there remains a possibility that an attack, or some other kind of incident, such as an espionage operation, did occur at Gvardeyskoe yesterday. Still, judging by the satellite imagery, any such incident that might have happened would appear to have been very limited in scope. However, it is worth noting that something like the aftermath of a pinpoint strike conducted using an armed drone targeting a small group of individuals, or even a single person, could be hard to see in the satellite imagery.

The Ukrainian government has been publicly coy about what has caused the recent string of incidents in Crimea and President Volodymyr Zelensky recently criticized leaks from officials about who might be responsible. At the same time, authorities in Kyiv have not shied away from making light of what has been fallen Russian forces on the peninsula recently.

A post today from the official Twitter account of Ukraine’s Main Directorate of Intelligence of the Ministry of Defence of Ukraine, or GUR, seen below, claims that Russia’s military is now relocating aircraft deeper inside Crimea and back into Russia in response to whatever has been happening.

It is, of course, impossible to rule out that some of the recent incidents in Crimea, such as what happened or didn’t at Gvardeyskoe, as well as others that may occur in the future, are indeed accidents or otherwise innocuous. There have been reports of a significant exodus of Russian civilians from Crimea in the past week and authorities there have raised the official terror threat level for the region. It would not be hard to see how citizens who have chosen to remain might now be inclined to reporting of anything even slightly out of the ordinary.

Whatever the case may be, the Ukrainian government has made clear that one of its central goals in this conflict is to retake Crimea and Russian military installations on the peninsula are and will continue to be targets of great interest.

The post No Major Damage Seen At Russian Airbase In Crimea After Reported Attack appeared first on The Drive.