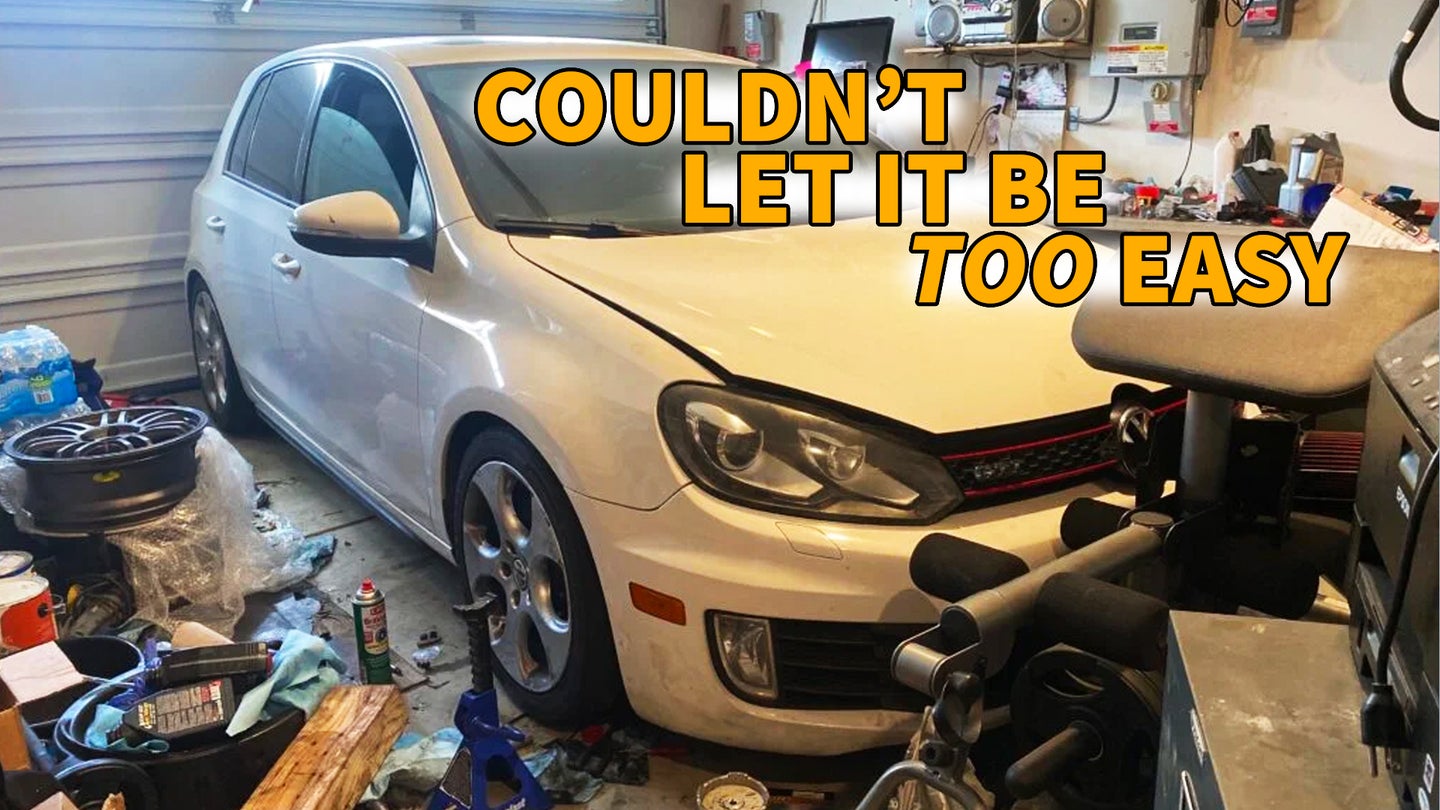 There’s always a moment in the stewardship of a new project car when it finds a way to finally disappoint you. For my former 2010 VW GTI, it came about during a normal fill-up. It was a rare rainy day in Southern California, and the wet ground was running rainbows from underneath my car. Yep, it had a serious oil leak.

In the dying afternoon light, I couldn’t see much, and dripping water was concealing the source of my problem. I checked the oil level, which was kosher. Clearly, this leak just began, but it was big enough to keep me out of the canyons that day. I retreated to the garage to see what was up.

I was annoyed, but not heartbroken. My first few thousand miles with the car at “stage zero” were a revelation, and the car was still very much in my good graces. Back in 2019, the VW perfectly suited my needs, hauled ass, felt nice to be in, and was quiet on a highway cruise. The merits of the GTI saved me from totally hating it for breaking, unlike my previous cars. It sat for a few days since I needed to work before I got around to an inspection during the weekend. What I found still didn’t break my resolve.

With the car jacked up off the ground, it became clear that the leak was coming from in between the engine and transmission: A rear main seal leak. It was the worst-case scenario; a transmission-off job. I can’t say I was surprised, because these GTIs are famous for wrecking rear main seals when the PCV/air-oil-separator goes bad. I was actually excited to dig into the car and get to know it because removing this car’s transmission actually looked pretty straightforward.

I scurried out of the garage, up my stairs, and onto my computer to fill a giant online shopping cart full of goodies for the GTI. Then I stared at the grand total and decided to, er, sleep on it. I had big, delirious dreams of putting a Wavetrac limited-slip differential in, a single-mass flywheel and better clutch, a short-shift kit, and some upgraded solid rubber engine/trans mounts. After I couldn’t bring out the risky text at 1 a.m. energy to just hit the purchase button, I began soberly paring down my order.

I settled on the essentials: an upgraded rear main seal from iABED, 034Motorsport engine and transmission mounts, some fluids, and a new PCV valve. I was betting on the clutch being fine and didn’t have the money to plunge into a limited-slip diff, even though that would have improved the car’s power delivery in a big way. The iABED rear main seal replaces the truly shit factory seal that’s just a bit of rubber vulcanized to a thin metal plate, with a thicker plate and a different seal style. Crucially, this style actually works, unlike the stock VW seal.

I placed my order, expecting about a week for my parts to arrive. About a month passed and I started getting annoyed. Six weeks from the original order date I had received the rear main seal, but no mounts, and no fluids. So I threw caution to the wind and got started. I got the trans out in about four hours, without removing the subframe, using the help of an engine support bar, and got my rear main seal installed. The gearbox is heavy and cumbersome, requiring a little bit of rotation to get past the subframe. A transmission jack saved the day here because it’s much too heavy to lift with body strength alone. But without a new trans mount (the old one turned out to be blown) and fluids, I had to put the car on the ground and roll it into my garage. Where it waited. Another month later, my parts came stumbling up to my door.

After three months of no GTI, I was fiending for just a nice rush of EA888 boost. I slammed the car back together in another four hours, after some serious issues getting the clutch aligned, but fought through it and won. My growing bubble of joy was reaching critical mass as I hopped into the driver’s seat for the final time, after adjusting my new Dieselgeek Sigma 6 short shifter I decided to order during my wait. It felt great. Snappy and notchy.

But as I turned the key to start the car and put it in reverse, I felt something had gone substantially wrong. It was insanely notchy, like lego block notchy. It almost refused to go in gear. “Ah shit,” I thought, “the clutch must still be misaligned.” The car even crawled forward slightly with the clutch fully depressed. Looking back on it, my intuition on clutch misalignment was incorrect but I did take the right path of diagnosis in the end by investigating the clutch hydraulics.

I mentally prepared myself for another transmission removal as I tried to diagnose the issue. I hoped it would get better with a drive, but with no luck. It felt like the clutch wouldn’t fully disengage, which was strange. I sat there for hours, putting it in gear, bleeding the clutch, bleeding it again, pressure bleeding it, putting it in gear, and nothing would work. For hours I pulled my hair out, figuring why it felt like the clutch wasn’t fully traveling, I took a shot in the dark and inspected the pedal box in the car.

After some fiddling and a flashlight search, all looked normal. I contorted myself under the dash and kept moving the clutch pedal and bottoming it out. I looked at where it would hit the carpet and—bam there it is—the source of my misery was identified. There was an aftermarket clutch pedal stop, the dumbest mod on Earth. The idea is that these things can improve left-foot ergonomics or something but they don’t make any sense. Seriously, don’t install one of these.

I pulled the bastard out, which added about a full inch-and-a-half to my pedal travel. I get back in the seat, and guess what? The clutch and shifter work fine! Crisis averted.

I was ready for many thousands of happy, leak-free miles. Though this was a three-month detour for my car, I was undeterred. But there was still more to come in the modding and wrenching journey with this car.

The post One Small Hiccup Caused Major Frustration in Removing My GTI’s Transmission appeared first on The Drive.