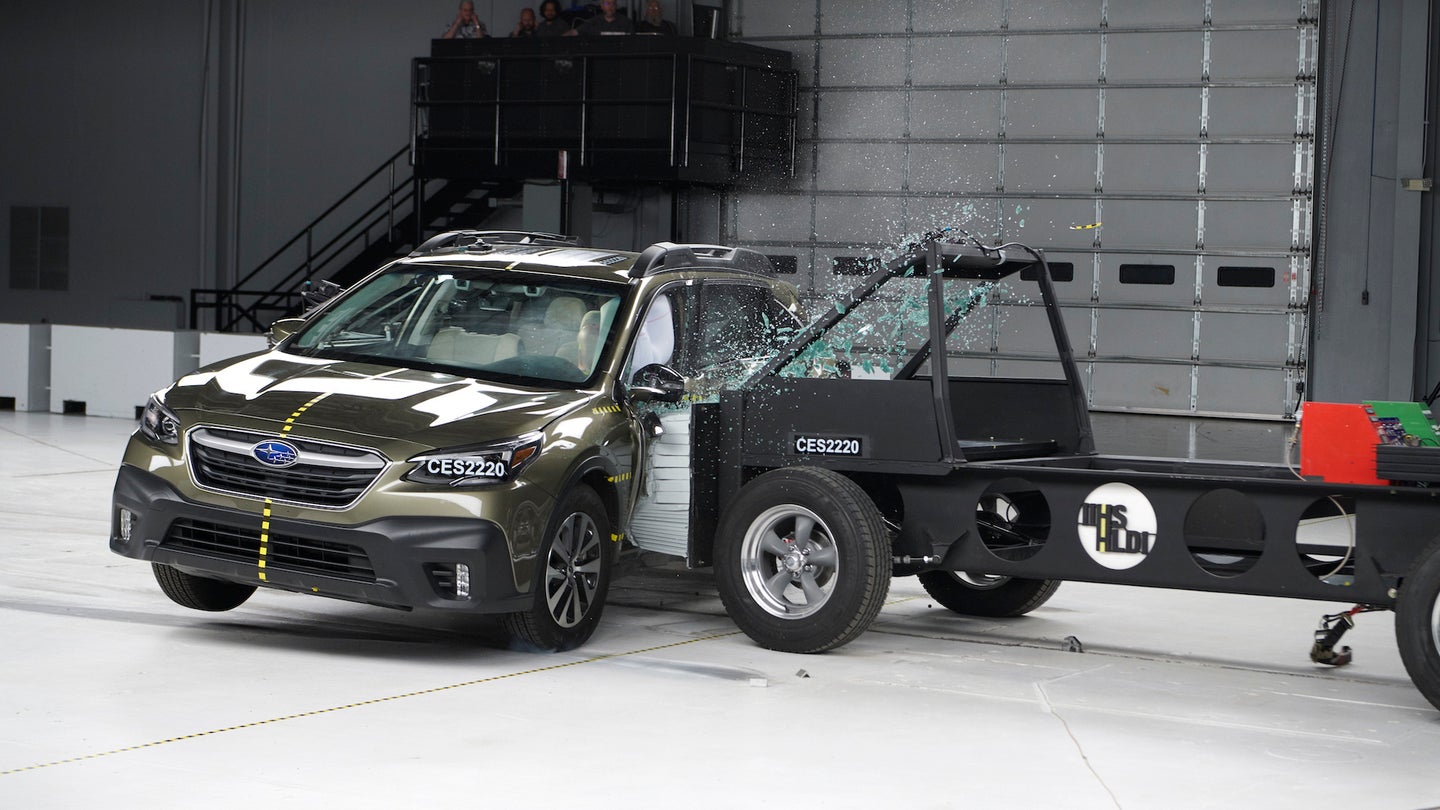 When put through the wringer of the Insurance Institute for Highway Safety’s updated side crash test, the Subaru Outback was the only midsize car to score a “good” rating. Another six midsizers were tested. The Hyundai Sonata and Volkswagen Jetta received “acceptable” ratings, the Honda Accord got a “marginal,” while the Toyota Camry, Nissan Altima, and Chevy Malibu all earned “poor” ratings.

The IIHS updated the side test to more accurately reflect a real-world crash against a “raised hood,” essentially a pickup truck or SUV. This means a heavier barrier (the dummy vehicle that slams into the test car) now weighing 4,200 pounds—a.k.a. the average weight of a modern SUV—and traveling at 37 mph. Before, this test involved a 3,300-pound barrier traveling 31 mph, and, interestingly, all of the cars mentioned above previously received “good” ratings under these old parameters.

According to the organization, the midsize cars in this updated test didn’t do as well as small or midsize SUVs, likely due to the fact that they ride lower, therefore putting occupants more directly in the proverbial firing line. This further confirms what most of us already sort of knew all along: regular cars don’t do as well in crashes against vehicles bigger and taller than them. A hypothesis that aligns with the fact that the Subaru Outback—a lifted off-road wagon that indeed rides a little higher than the traditional sedans tested—performed the best.

“With vehicles that sit lower to the ground, the striking barrier hits higher on the door panel,” said IIHS President David Harkey. “That potentially puts sedans and wagons at a disadvantage in this evaluation but reflects what happens in a real-world crash when these vehicles are struck by a higher-riding pickup or SUV.”

This new side crash test was developed after the IIHS discovered back in 2019 that side impacts still accounted for 23 percent of all passenger deaths. This was despite 99 percent of all vehicles tested scoring “good” on their official test. So, no, Camrys and Altimas did not magically get less safe this year. Instead, the test itself got that much more intense and more representative of an impact with an SUV which, given their ubiquity, a new sedan should be better equipped to protect against.

The post Only 1 Midsize Car Was Rated ‘Good’ in IIHS’ Tougher Side Crash Test appeared first on The Drive.