Ornate 1946 Chevy Beer Tanker Rat Rod Truck Has Undeniable Style, and You Can Buy It 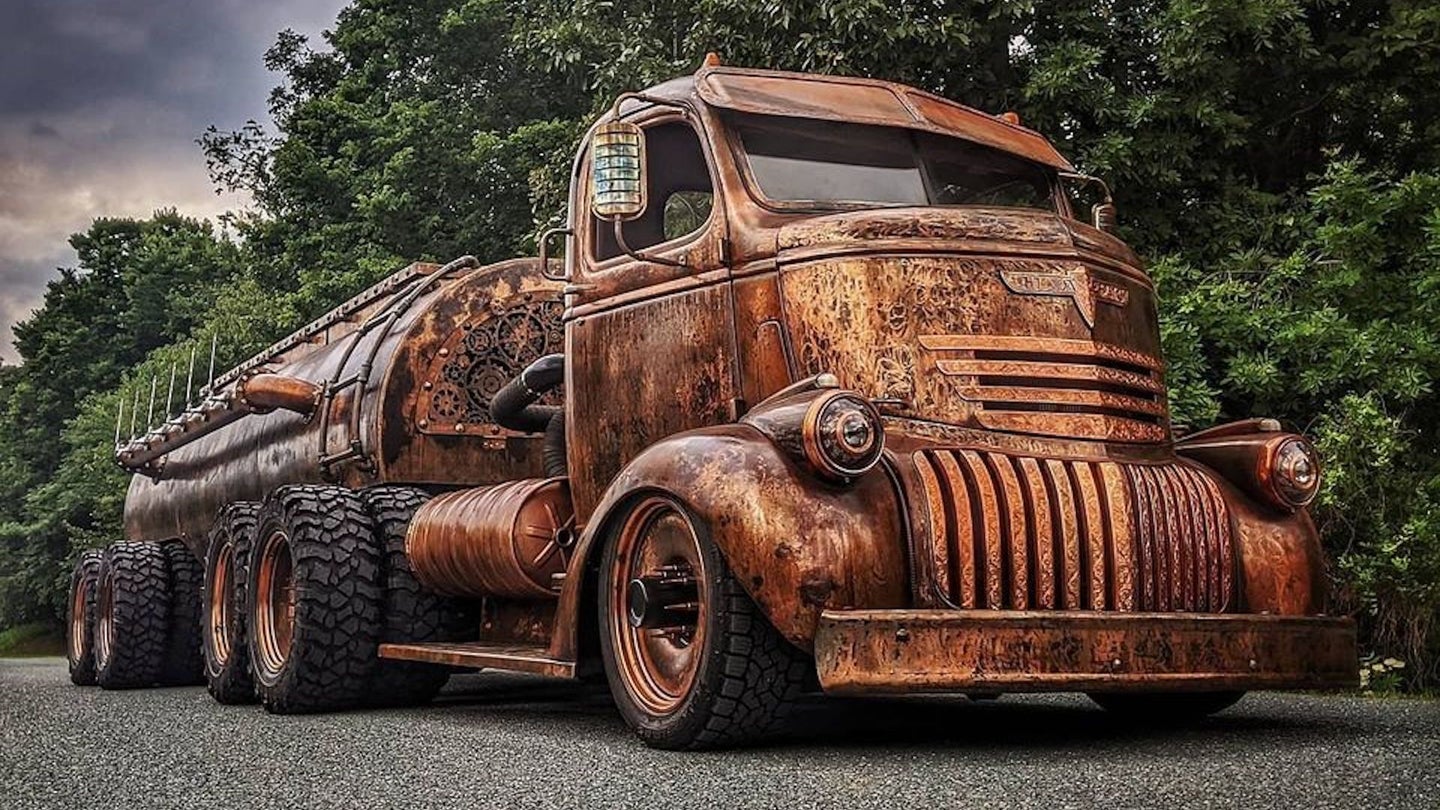 Though rat rods‘ ethos is to look weathered and worn-out, it doesn’t mean they can’t be showcases of dilapidated beauty. Possibly the grandest example is this 1946 Chevrolet cab-over beer tanker truck built by Hauk Designs—it’s pretty enough to warrant attention for its looks alone, and is all the more worth talking about because it’s for sale.

This tanker is based on a Chevy AK-series cab-over-engine truck, which was built from 1941 to 1947. Contrary to its name, its engine is located behind its cab, taking the form of a Cummins 12-valve. That’s the colloquial name for the 6BT, the 5.9-liter turbodiesel straight-six used in late-’80s and ’90s Dodge Rams. How much power it makes is beside the point, as a rat rod is all about looks, and the Cummins goes uncovered so light can glint off—and this is the most baller thing I’ve typed in a long time—its copper-plated, hand-engraved turbocharger.

Ornate, patina’d copper is the theme of the truck, which is plated in the stuff from bumper to bumper. All the engraving is said to have been done by hand over hundreds of hours, which you’ll believe the second you get a close look at its … anything, really. The overall effect is a midcentury shape that somehow has some serious steampunk about it, yet with none of the tacky, overwrought execution so common to the aesthetic.

Being a rat rod, this Chevy needs to be more than just tarnished; it also has to be low to cram its Detroit Steel wheels into its fenders. That’s why it has a full air ride, which has to be some heavy-duty stuff to support the weight not just of the truck, but the fully laden beer tanker. It’s equipped with a glycol refrigeration system common in brewing, and is said to have a capacity of 14 kegs—keg size appears to vary some, but that’s equivalent to 2,310 12-ounce bottles by Belmont Station standards. That’s over 1,730 pounds of beer, or as much as your typical Madison, Wisconsin, fraternity goes through in a weekend.

This marvelous machine is currently listed for sale on Facebook Marketplace in Bradenton, Florida, for the princely sum of $250,000. Yes, that’s supercar money, but between this and a Lamborghini Huracan, would you really pick the supercar? Nobody’s gonna look twice at a cookie-cutter influencer-mobile with this around, and if the Lamborghini tries to protest by revving its V10, this truck can drown it out with its train horn. And then, to get back on everyone’s good side after deafening them, distribute some beverages. Now, will that be the lager or the stout?

The post Ornate 1946 Chevy Beer Tanker Rat Rod Truck Has Undeniable Style, and You Can Buy It appeared first on The Drive.