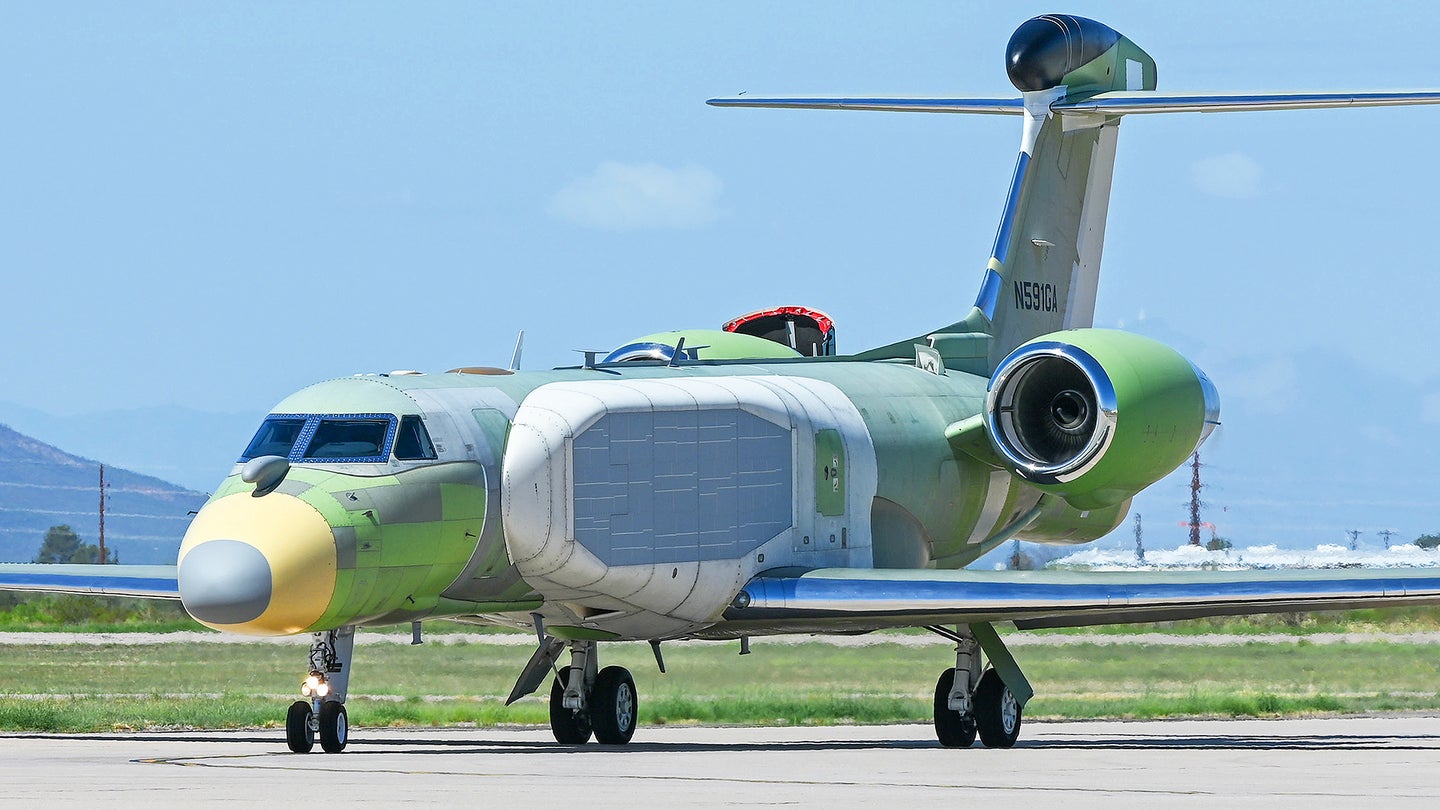 The U.S. Air Force has released new photos and a brief video of the next-generation EC-37B Compass Call electronic warfare jet. The recently shared media offers the clearest official look yet at the jet, which is intended to replace the Air Force’s current aircraft that handles the Compass Call’s mission, the EC-130H.

The footage and images of the EC-37B were captured after the aircraft arrived at Davis-Monthan Air Force Base in Tuscon, Ariz. on August 17 for a brief visit with the 55th Electronic Combat Group Airmen to show off its progress. Both the service and L3Harris, the platform integrator for the program, last year explained that the EC-37B would be delivered for testing at around this time of year, suggesting that the aircraft’s development timeline is, as it stands, somewhat close to being on track.

The EC-37B, once completed, will be used to perform the overall Compass Call mission, “disrupting enemy command and control communications, radar, and navigation systems to restrict battlespace coordination,” according to the Air Force. This is achieved through providing critical stand-off electronic warfare jamming support, which is ideal for use against adversarial communications systems rendering the enemy unable to relay important information. It can also be used for other types of electronic attacks and jamming. On top of that, a secondary intelligence gathering functionality further rounds out the Compass Call system by allowing it to spot, track, and geolocate a variety of emitters.

The first EC-37B Compass Call aircraft made its inaugural flight in the fall of last year, and a corresponding announcement released by L3Harris neglected to go into too much detail on the test but nonetheless seemed hopeful about the progression of the program. That hope was further echoed in June of this year when members of the U.S. House of Representatives moved to add $37 billion to the proposed defense budget for Fiscal Year 2023 —  $883.7 million of that proposed plan is intended to acquire four more EC-37B Compass Call electronic warfare jets.

In what was quite the expensive jump from the Air Force and L3Harris’ original plan of procuring only 10 EC-37Bs, the potentially 14-deep fleet of next-generation Compass Calls would equate to a one-for-one replacement of the existing EC-130Hs. In the early stages of the program, L3Harris was confident that 10 EC-37Bs would provide more than enough capability to supplant the 14 legacy EC-130Hs that the Air Force had been operating. Now, it would appear that the Department of Defense has decided that the trade-off either wouldn’t be that simple or that replacing each and every aging EC-130H may only further bolster the Air Force’s electronic warfare capacity making it worth the investment.

While the EC-130H has certainly cemented itself in Air Force history as a very capable electronic warfare jet, a number of the type’s airframes date all the way back to the Vietnam war, making it so the fleet is in need of a successor to start taking over. To address this need, the ball officially started rolling in 2017 when the Air Force awarded L3Harris a contract to execute the Compass Call’s “cross deck” program. Basically, what this means is that as much as possible of the existing Compass Call system as it is installed on the EC-130H is being directly reinstalled aboard the new EC-37Bs.

The service knew it wanted to keep the electronic warfare equipment that had allowed the EC-130H to achieve its successful jamming career, but the dated airframe had to go, and this is where Gulfstream came in.

Under its contract with the Air Force, L3Harris will harvest components of the already proven system from the legacy EC-130Hs, upgrade it, and transplant the technology into highly modified Gulfstream G550 business jet airframes, thereby creating the EC-37B that can be seen in the Air Force’s recent snapshots. In partnership with L3Harris and Gulfstream, BAE Systems will also be responsible for overseeing the mission systems integration aspect of the EC-37B’s development.

The Gulfstream’s high altitude abilities will allow its electronic warfare and signal intelligence gear to reach significantly farther and it will be able to get to a operations area and back home much faster.

The type gets its ungainly looks from its predecessor, Israel’s Eitam airborne early warning and control aircraft. That type also now flies with the Italian and Singaporean air forces, as well as a version of it with the U.S. Navy. The latter as range control platform under the NC-37B designation. The same outer moldline, which can pack massive flank active electronically scanned arrays (AESA), as well as smaller ones forward and back, along with many types of communications systems, is what is being used for the EC-37B.

AESA arrays are known for their use as radars, but they are extremely capable in electronic warfare applications, harnessing instant scanning and extremely high-powered, tight beams of RF energy to wreak havoc on emitters.

You can read more about the Air Force’s decision to go with a modified business jet for its EC-130H replacement, and other projects, in this past War Zone feature, here.

As previously noted, the Compass Call mission is currently performed by the EC-130H, which played a quiet but pivotal role in some of the United States’ most high-profile operations in the Middle East and other areas over the years. Previous iterations of the EC-130H were beneficial in supporting missions such as the 2011 raid that eventually resulted in taking out Al Qaeda founder Osama Bin Laden in Pakistan. Another prime example of what Compass Call has done over the years was its role in helping prevent the detonation of an improvised explosive device that could have killed then-Maj. Gen. James Mattis. During the opening stages of coalition operations, it helped disrupt the enemy’s decision cycle in multiple ways, most importantly jamming critical communications.

Electronic warfare will continue to play a huge role on future battlefields, including potential large-scale conflicts against major opponents like China, and its significance appears set to only grow as time goes on and technology advances.

While recent developments may later alter the pre-established delivery timeline for the EC-37Bs, the Air Combat Command had initially planned to field the first five aircraft in 2023. As far as the 14 EC-130Hs are concerned, five of which have already been retired as of 2021, and another two are set to leave service this year.

With the EC-37Bs eventually joining the Air Force’s evolving aerial electronic warfare structure, the Compass Call’s utility, and legacy, are only set to grow.

The post Our Best Look Yet At The Air Force’s EC-37B Compass Call Jamming Jet appeared first on The Drive.