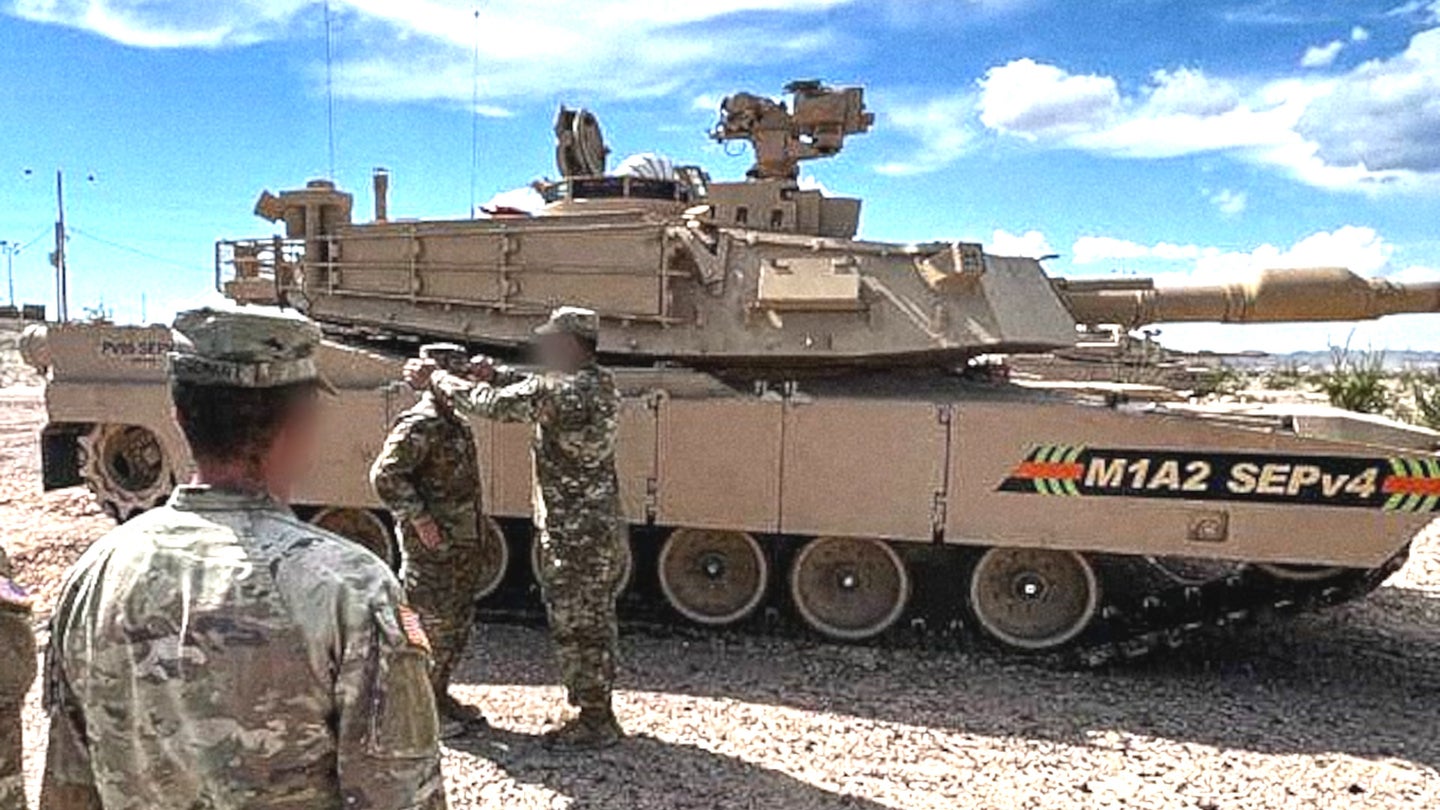 What appear to be the first pictures of a prototype of the newest version of the Abrams tank, the M1A2 System Enhanced Package Version 4 (SEPv4) variant, have emerged online. The tank in question is currently undergoing testing at the U.S. Army’s Yuma Proving Ground in Arizona.

Pictures of the improved Abrams were posted earlier today on the official Facebook page for the 2nd Battalion, 12th Cavalry Regiment, which is part 1st Cavalry Division’s 1st Bridge Combat Team based at Fort Hood in Texas. The tank has “M1A2 SEPv4” emblazoned at least on the front end of the right side of its hull, along with “PV05 SEPV4” written in various locations on the hull.

Members of 2-12th Cavalry are helping to test the new Abrams variant at Yuma. The Facebook post was subsequently taken down, but the photographs are now widely circulating elsewhere on social media.

According to a report released last year by the Pentagon’s Office of the Director, Operational Test and Evaluation the SEPv4 version builds on the previous SEPv3 variant, by adding the following:

Information the Army has previously released says that the SEPv4 will also feature a Laser Warning Receiver (LWR) system to help improve survivability by alerting the crew that targeting lasers associated with guided anti-tank missiles and other weapons are being aimed at them. Separate from the SEPv4 development effort, the Army has also been working to integrate Trophy Active Protection Systems (APS) onto its existing M1A2 tanks and also has explosive reactive armor (ERA) kits available for the Abrams.

In addition, the SEPv4 will have an Improved Thermal Management System (ITMS), as well, to help mitigate the additional heat generated by the various new electronics and the power sources that go along with them.

The new meteorological sensor is all visible in the pictures of the prototype vehicle from Yuma. The tank has boxy, horn-like protrusions on either side of the front of the turret, as well, the purpose of which is not immediately unclear. These could be components of the LWR system.

Interestingly, the design of a new next-generation Abrams technology demonstrator that General Dynamics Land Systems has put together, called AbramsX, hits on a number of these points. The AbramsX has is lightweight, has a reduced crew, and has a more fuel-efficient and quieter hybrid conventional-electric propulsion, among other things, as you can read more about here.

Of course, the Army still has a ways to go before it even fields any of the upgraded SEPv4 tanks. The service’s proposed Fiscal Year 2023 budget noted that the delivery of the initial SEPv4 prototype had been delayed for unspecified reasons and that this would push back the start of “Original Equipment Manufacturer (OEM) vehicle testing” into late Fiscal Year 2022. This would appear to be the testing now occurring at Yuma.

It’s unclear when that test program actually began, but the 2022 Fiscal Year ended on September 30. As it stands now, that testing is not expected to wrap up until sometime next summer. The Army has said in the past that it hopes to begin fielding M1A2 SEPv4s to operational units in the 2025 Fiscal Year, but it’s not clear if that schedule may have already changed given the delays.

Regardless, it’s great to actually see it.

The post Our First Look At The Army’s Upgraded M1A2 SEPv4 Abrams Tank appeared first on The Drive.