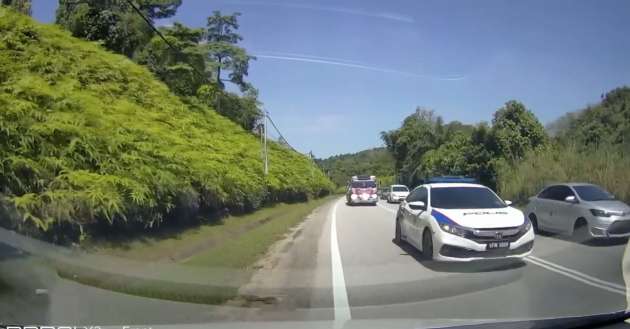 PDRM has acknowledged the viral video of a police escort car overtaking on a double line at the Gua Musang – Kota Bharu stretch of road. The cop car was paving the road for a convoy of two flatbed trucks carrying luxury cars, and a white Ford Ranger. It was a nasty surprise to the camcar, which had to evade and move into the road shoulder. Single lane road, by the way.

“People raised the question that the escort car was driving dangerously (mengundang bahaya). Actually, the escort car was fulfilling its duty (mengatur dan mengawal) under Section 21 of the Police Act 1967. This means that other road users have to cooperate and slow down, give way to the convoy, or stop to prevent something from happening,” he explained, reported by Kosmo.

“Police escort cars have their own rules (peraturan tersendiri) and they cannot do as they like when on duty. I don’t blame anyone; perhaps many are still confused by the matter,” he told reporters at a press conference at the IPK Kelantan in Kota Bharu today.

There you have it. Even in a situation like the ones that went viral yesterday and today, the VIP convoy has the right of way. Sorry folks, it is what it is. Always be alert on the road, as many unexpected things can appear suddenly and fast action may be required. Drive safe.