Pentagon UFO Office: No Alien Or ‘Transmedium’ Craft Yet But Many Threat Concerns 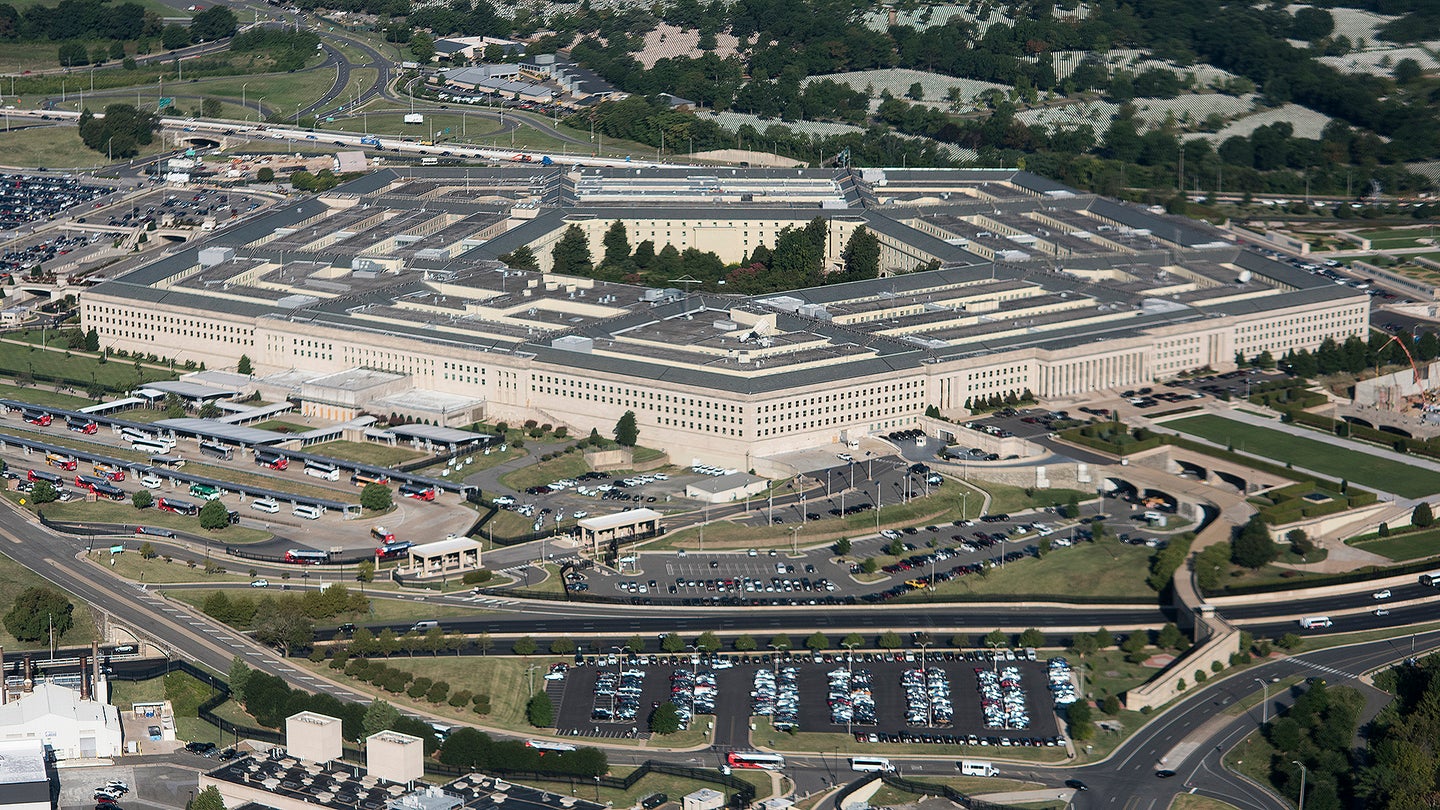 There is still no evidence that space aliens are visiting or have visited the earth, the new Pentagon office tasked with tracking such reports said during a Friday afternoon press briefing. But in hundreds of new cases of unidentified aerial phenomena (UAP) that the All-domain Anomaly Resolution Office (AARO) is investigating, there are indications of potential threats to U.S. military installations and observations of objects with flight dynamics requiring more research, officials told reporters, including from The War Zone.

AARO was created in July to handle the government’s investigation into unidentified objects on and under the sea, in the air as well as in space – and any “transmedium” objects shifting between those domains. It was launched amid growing concerns about threats to U.S. military installations and naval and air assets from objects of unknown origin and was a rebranding of a previous Pentagon UAP investigation effort – called the Airborne Object Identification and Management Group (AOIMSG) – to broaden its scope of operations.

The press briefing, by Under Secretary of Defense Ronald Moultrie and AARO director Dr. Sean Kirkpatrick, came a day after the Senate passed the Fiscal Year 2023 National Defense Authorization Act (NDAA) that includes language codifying how AARO will investigate these objects and protect Defense Department employees and contractors who report details about them. It is anticipated that the NDAA will be approved by President Joe Biden.

The briefing also came as the wait continues for the Office of the Director of National Intelligence’s (ODNI) hotly anticipated new report on UAPs, which will include specific details of the number of new cases being examined and how many of those were unable to be identified. Its last report, delivered in June 2021, found that of 144 cases investigated, only one could be identified – a large deflating balloon. When asked Friday by The War Zone when that report will be released, an ODNI spokesperson declined comment.

Kirkpatrick said Friday that while AARO is investing hundreds of new reports, that load does not represent a significant increase since May. That’s when Scott W. Bray, the Deputy Director of Naval Intelligence, testified before Congress that 400 new reports came in after the initial 2021 ODNI report.

During Friday’s press briefing, Moultrie and Kirkpatrick both declined to say how many of the new cases – mostly unknown objects in the sky – have been identified after investigation. They instead deferred to the looming new ODNI report.

However, though it’s still early in the research process, AARO has “not seen anything that would lead us to believe that any of the objects that we have seen are of alien origin,” Moultrie said. “If we find something like that, we will look at it and analyze it and take the appropriate actions.”

Asked about investigations into past incidents reported to the government, Moultrie said he has “not seen anything in those holdings to date that would suggest that there has been an alien visitation and alien crash or anything like that.”

Nor, he said, have there been any “credible reporting” to date of transmedium objects.

“I don’t want to be definitive and say there is nothing that is there, but I will say we have not seen…any indications that there have been transmedium activities.”

AARO, however,  is “concerned about objects that appear – and this has happened for decades – on the sea, near our bases and installations and ports,” said Moultrie. The War Zone has previously done a great deal of investigative reporting on those concerns, which you can read more about here.

Moultrie, however, declined to offer details about what AARO is doing about objects in space.

When it comes to broader national security concerns, Moultrie was quick to point out that “any platform not authorized to be in a domain that is restricted, we consider that to be a potential threat to the safety of our personnel or to our platforms.”

AARO is “still trying to resolve some of these cases,” he said. “Some of them probably could not be characterized as civilian balloons or [drones] or whatever. So, in the absence of being able to resolve what something is, we assumed that it may be hostile. And so we have to take that seriously.”

There is also an effort to ensure deconfliction between reports that come in and “blue” classified Pentagon and intelligence community technology programs, Kirkpatrick said.

When asked if AARO has detected any UAPs demonstrating technology it’s unable to explain Kirkpatrick said “there are things that appear to demonstrate interesting flight dynamics that we are fully investigating and researching right now.”

That could be due to a wide range of things, he said.

The effort to determine the origin of an object is being aided by new and recalibrated existing sensors, said Kirkpatrick.

“We have a collection plan that we are building off of,” he said. “We have some sensors that we are investing in, but we’re also looking at conventional [sensors]. We have off-the-shelf theater assets and whatnot, as, as well as re-calibrating the sensors to ensure we know what knowns look like. And that way we can weed those out. So it’s still a little early, but it’s moving forward.”

While he would not offer specifics on what kinds of sensors, it is well known that among other things, AARO will piggyback on efforts already underway to upgrade the architecture of existing sensor networks to be able to better detect low-flying and small radar cross-section cruise missiles and drones.

That includes an upgrade of F-15C/D and F-16C/D jets tasked with homeland defense with active electronically scanned array (AESA) radars, for instance, which can detect small, low-flying targets.

In addition, adding infrared search-and-track (IRST) systems will help these fighters further to detect and identify these hard-to-spot targets. That process is ongoing now, as well. But these are just some first steps and a much more extensive sensor upgrade will be needed to better surveil the approaches to the continental U.S. and monitor for these threats. These same capabilities could be brought to bear for detecting and classifying UAPs. This includes having networking and sensor fusion capabilities so that even more complex targets – like those employing electronic warfare tactics – can still be detected, understood, and dealt with if need be.

Beyond sensors, there has been an effort to improve human intelligence collection from troops and contractors who are observing these objects.

“The stigma associated with UAP reporting has been significantly reduced,” said Kirkpatrick. “While that’s good news, more work needs to be done. building on that progress. AARO is working with the military departments and the joint staff to normalize, integrate, and expand UAP reporting beyond the aviators to all service members, including mariners, submariners, and our space guardians. AARO is working to take in more UAP reporting and analysis from the interagency, FAA, NOAA Coast Guard and the Department of Energy to name a few.”

The NDAA section dealing with UAPs is designed to codify that.

It includes improved ways for DOD employees and contractors with knowledge of these objects to come forward without fear of reprisal and efforts to reduce the stigma that once plagued those who reported what is now called UAPs. It also calls for the investigation of reports dating back to January, 1945. That includes compartmentalized programs buried in the system decades ago.

“That that is going to be quite a research project, if you will, into the archives and going backwards in time,” Kirkpatrick said.

The NDAA that passed largely mirrors the amendment introduced in July by Rep. Mike Gallagher (R-Wisc). You can read more about that in our coverage here.

Moultrie and Kirkpatrick said that an increased effort at governmental transparency, better reporting practices and greater emphasis on improving technology should offer the clearest picture yet of what these UAPs are, where they come from and what threats they really represent.

Given the U.S. government’s long and tortured history with the topic, it remains to be seen just how successful they will be.

The new ODNI report that Kirkpatrick said “will be coming out shortly” should give an indication at least of how that is going.

The post Pentagon UFO Office: No Alien Or ‘Transmedium’ Craft Yet But Many Threat Concerns appeared first on The Drive.