Perodua Myvi enters junction through fuel tanker blind spot, both collide – make sure you are in driver’s view 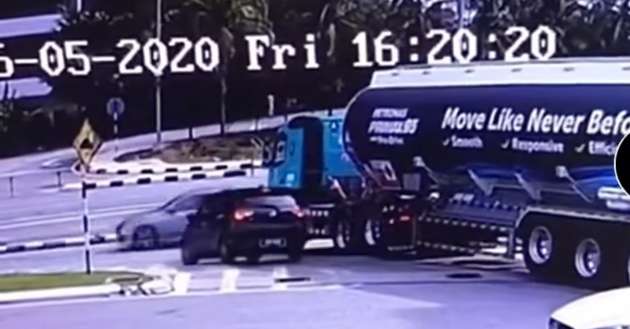 Very large vehicles such as trailer trucks require plenty of room to manoeuvre, especially through junctions and bends. In the case of this coming together between a tanker and a Perodua Myvi, truck drivers cannot avoid what they cannot see, as the driver of the latter will no doubt have found out for sure by now.

In this Facebook reel posted by Suara FM, CCTV footage shows that the driver of this Myvi has driven straight into the blind spot of the fuel tanker truck that is waiting to safely join the road through this junction, in an attempt to take the gap left between the truck and the kerb.

Having not seen the car because it is in their blind spot, the truck driver proceeds to join the road not knowing that the Myvi is waiting immediately alongside to do the same.

In other situations around large vehicles, if you cannot see the truck driver in their mirror, they most likely cannot see you – that would be a good starting point for precautions to take when being around large vehicles such as this, which also applies when following alongside in a straight line such as when travelling next to one on a highway.

The still images included in this Facebook reel show the metal box-section barrier located in the large gap between the trailer’s axles, which extends downwards below the main section of the trailer. This has apparently done its job of preventing the car here from getting pushed in front of the truck’s forward-rolling wheels, which could end with the car – and its occupants – getting crushed.

It looks like a substantial repair bill is coming the Myvi owner’s way, though judging from the occupant cabin that appears to be unharmed, this is relatively inexpensive compared to the human cost of what might have been. Remember, when operating a motor vehicle, your first line of defence is your situational awareness.