Polestar 2 Performs Quite Well In The Moose Test 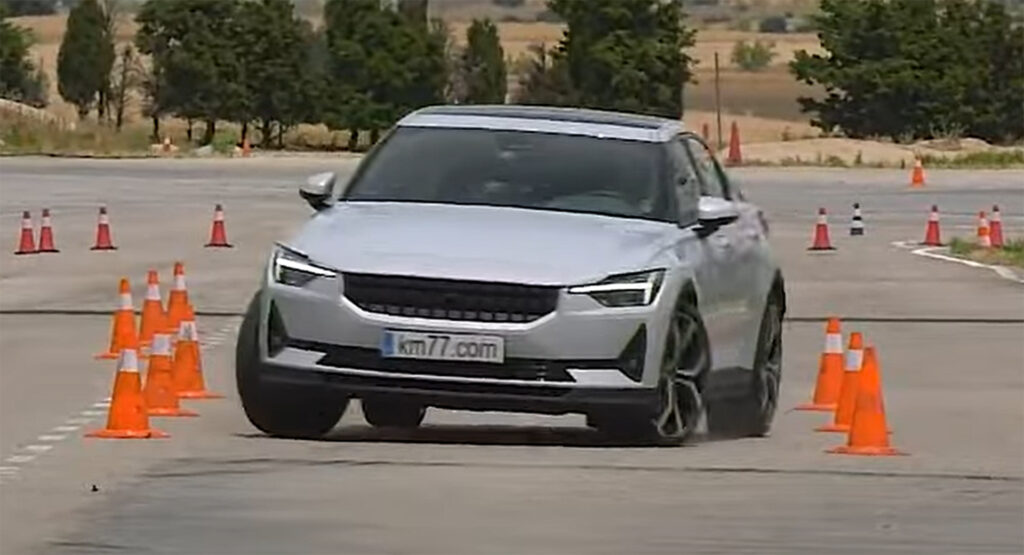 Like just about every EV, the Polestar 2 has a low center of gravity thanks to its floor-mounted battery pack, making it an ideal candidate for the moose test. But how does it fare against similar vehicles in the test? That question was answered by km77.com in their latest video, in which they put the car through its paces.

The first run had an entry speed of 81 km/h (50 mph), and it saw the car hitting the outside cones on turn-in, running so wide it wasn’t able to complete the course. By lowering the entry speed to 74 km/h (46 mph) in the next test, however, the Polestar was able to improve greatly, staying completely within the course with minimal understeer.

Read More: 2022 Mercedes EQS Fares Poorly In Moose Test Because Of Its Weight

Testing the limits of the car’s grip, km77 tried raising the entry speed up to 76 km/h (47 mph), but the car fared the same as the original run, hitting the outside cones, albeit not as dramatically. The same could be said when they raise the entry speed again to the moose test’s 77 km/h (48 mph) benchmark, but this time they were at least able to avoid missing the course’s exit.

It’s worth noting that just because the Polestar 2 wasn’t able to meet the 77 km/h benchmark, doesn’t mean it performed poorly. For reference, its 74 km/h maximum successful speed matched the Mini Countryman SE and BMW iX, and was good enough to beat the Tesla Model X, Jaguar I-Pace, and VW ID.4. Additionally, the car only came 1 km/h behind the sporty Audi E-Tron GT, as well as 4 km/h behind the Porsche Taycan Turbo S.

The car also performed well in the slalom test, where it achieved a time of 22.8 seconds. That actually placed it first on the list of similar electric cars km77 has tested, finishing ahead of the Mini Countryman SE, Cupra Born, and BMW i4, among others.