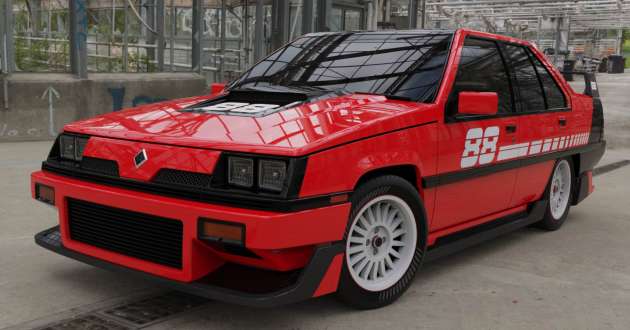 Regular viewers of Netflix may have come across Seoul Vibe, a South Korean action film set against the backdrop of the 1988 Seoul Olympics and which packs plenty of driving action, mainly starring Korean cars in its cast of automobiles.

In conjunction with the 65th Merdeka Day celebrations that has just been last month, Netflix Malaysia has been in collaboration with former Proton designer and current MIMOS head of industrial design, Saharudin Busri for the creation of his take on the theme with a Malaysian connection, drawing inspiration from the film.

Given the subject, as well as Saharudin’s past work, the outcome would perhaps be expected: the movie distributor has chosen for Saharudin to reimagine a vehicle he is doubtlessly familiar with – the original Proton Saga – in the context of Seoul Vibe.

Enter the Saga SV88, Saharudin’s rendition of what the first Malaysian car might look like should it be cast in a role for the South Korean action film. Cues from the racing and tuning scene in car culture are evident on the SV88, which wears an outwardly sporty look albeit with relative restraint. Saharudin has placed emphasis on the Saga’s square-edged look with the alterations, where changes to the headlamps continue to use rectangular shapes and straight lines, as do the front air intake, lower splitter as well as the bonnet with its raised central section and scoop.

Viewed in profile, the Saga SV88 sports a set of retro-look white multi-spoke wheels with a slight dish, and the look is continued with a set of side skirts to match the items at the car’s front and rear.

Speaking of which, the rear end gets a pair of exhaust outlets also of rectangular design, the tail lamps have been given the rectangular grid treatment, while the bootlid is topped by the ‘tiang gol’ (goal post)-style rear wing and louvres for the rear screen, the latter also seen on contemporary Sagas.

In addition to his modernised renditions of the original Saga, Saharudin has also turned his pen to a sports car concept, with the virtual rendering of a sports car unveiled last year, which was inspired by the Aston Martin DB10.

What do you think of Saharudin’s latest take on the original Proton Saga? Let us know in the comments.