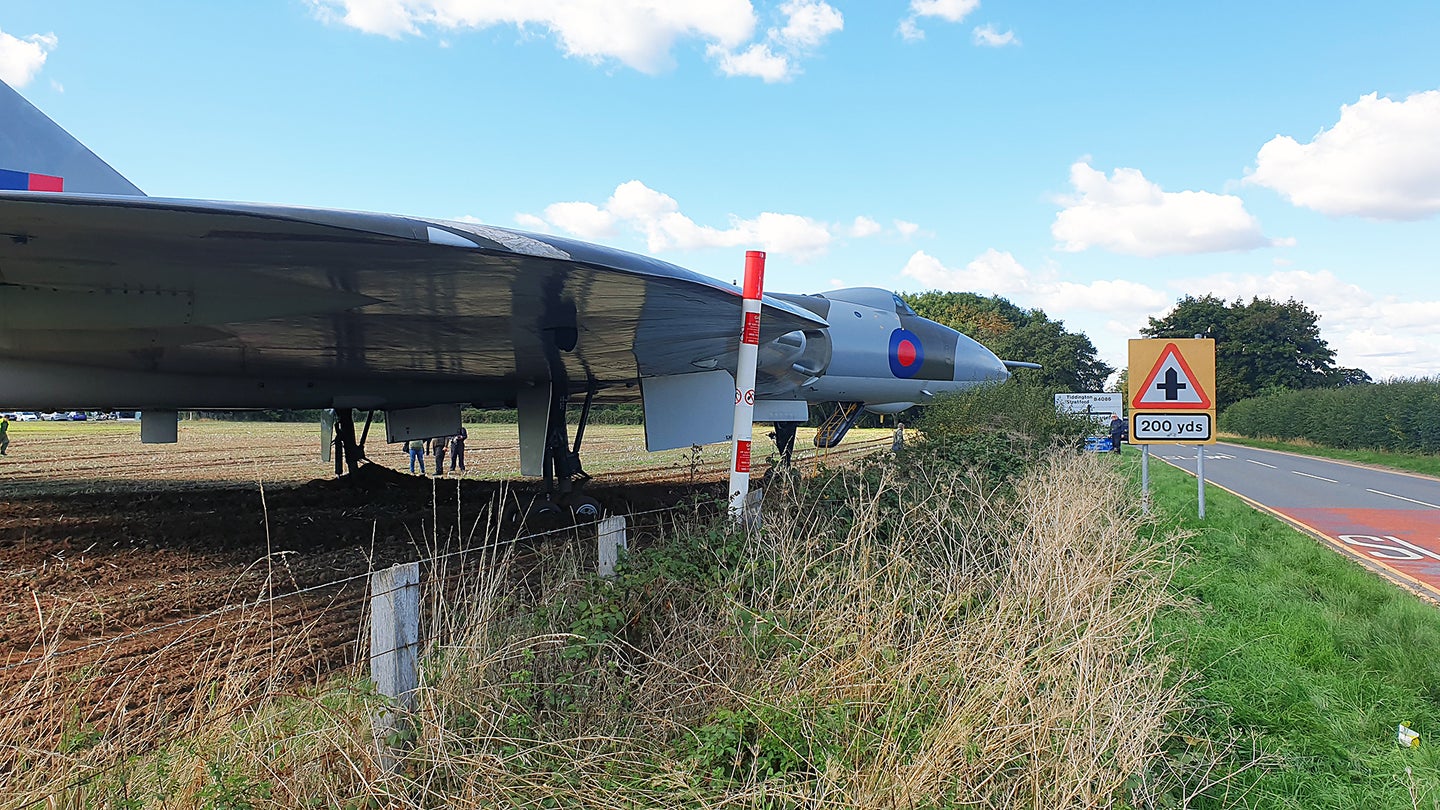 Details remain limited at this time, but a retired Royal Air Force (RAF) Arvo Vulcan bomber recently suffered a near catastrophic accident during a high-speed taxi run in Wellesbourne, Warwickshire. The incident, which occurred on September 16, took place at the Wellesbourne Mountford Airfield in the United Kingdom’s West Midlands region where the Vulcan, also known by its old RAF serial XM655, is based. The 655 Maintenance & Preservation Society, which maintains the aircraft, claims the incident was caused by a malfunction of the aircraft’s airspeed indicator.

According to local reporting, no injuries were inflicted on the aircraft’s pilot, Wing Commander Mike Politt. The high-speed taxi run was performed as practice for an upcoming airshow at the Airfield scheduled for September 18. Following the incident, the event has now been canceled.

The mishap could have been a whole lot worse were it not for the small strip of field that separates the Airfield’s runway from the B4086, a busy rural B-roadway which connects Wellesbourne to the nearby town of Stratford-upon-Avon.

Footage posted to Twitter shows XM655 overshooting the end of Runway 36 while the aircraft appears to brake furiously to avoid a head-on collision with traffic on the B4086. Images taken after the incident occurred, both on the ground and from above, show just how close the Vulcan came to crashing into the road, with potentially tragic results.

Locals were quick to get a snap of the aircraft as it protruded onto the edge of the road. Others noted on Twitter the power of the Vulcan’s breaking gear, having left deep plow markings in the strip of land separating the road from the runway.

XM655 is one of only three British Avro Vulcan strategic bombers currently in taxiable condition (the others being XH558 and XL426.) All three examples are non-flyable aircraft – XH558, the last Vulcan bomber capable of flight, was a star of sorts, and was kept flying by private benefactors from 2007 until 2015 before being grounded once and for all.

XM655 was delivered to the RAF in 1964. Along with the Victor and Valiant bombers, the RAF Vulcans formed a key part of the UK’s nuclear deterrent capability in the 1950s and 1960s as “V Force” or “Bomber Command Main Force.” The V Bomber force reached its peak in June 1964 with 50 Valiants, 70 Vulcans, and 39 Victors in service. The RAF’s Valiant bombers were retired in the 1960s, while the Victors were turned into tankers after being retired from the nuclear mission in 1968. RAF Vulcans continued to serve in a bomber capacity after this date, and even took part in conventional strike operations during the Falklands conflict. XM655 was put up for disposal in late 1983. The aircraft was flown into Wellesbourne Mountford on February 11, 1984. The Wellesbourne Mountford Airfield currently owns XM655 and it has been maintained by the 655 Maintenance & Preservation Society since 1998.

In a statement posted on its website, the 655 Maintenance & Preservation Society explained that the incident on September 16 was caused by a “malfunction” of the aircraft’s airspeed indicator.

“After satisfactorily completing low speed steering and braking tests on runway 05/23, the aircraft was taken onto runway 18/36 for a trial high speed run. Due to a malfunction of a piece of equipment in the cockpit, the aircraft remained at full power for approximately two seconds longer than intended. This resulted in excessive speed and less distance in which to stop, and the aircraft passed beyond the end of the runway on to the agricultural area, stopping just before the airfield perimeter.”

“The failed equipment was an air speed indicator which had been tested and found satisfactory six days ago, and which started working normally before the end of the run. The aircraft brakes worked properly but were unable to bring things to a halt within the reduced space available.”

According to the Society, a small team of skilled and dedicated volunteers, “many of whom are ex-RAF, (some even ex-V-Force personnel and one of whom actually worked on XM655 in service),” help to preserve the aircraft and maintain its taxiable condition. “Fast taxi” events of the kind that resulted in the September 16 incident are usually carried out in the summer months by the Society to show off the aircraft and raise funds to support its preservation. These events have been less frequent in recent years, however – prior to 2021, they had not been performed by the Society for five years.

Taxi runs involving both flyable and non-flyable aircraft certainly carry some degree of risk for both pilots and spectators observing them. Back in 2009, for example, Handley Page Victor XM715 (Teasin’ Tina) made a brief unplanned flight during a “fast taxi” run at Bruntingthorpe Airfield in Leicestershire, England, before safely landing (footage of the incident can be seen below.) The end-of-life functions of non-flyable aircraft, such as XM655, are hotly regulated by aviation authorities precisely because of the potential dangers their operation can pose to both pilots and the public.

Thankfully the incident at Wellesbourne didn’t result in any injuries, and the strip of grass at the end of the airfield’s runway gave the crew space to eventually stop the Vulcan. While human life is always the greatest concern, the preservation of such an important piece of aviation history is definitely an added plus.

The post Retired Vulcan Bomber Plows Into A Field During High-Speed Taxi Run appeared first on The Drive.