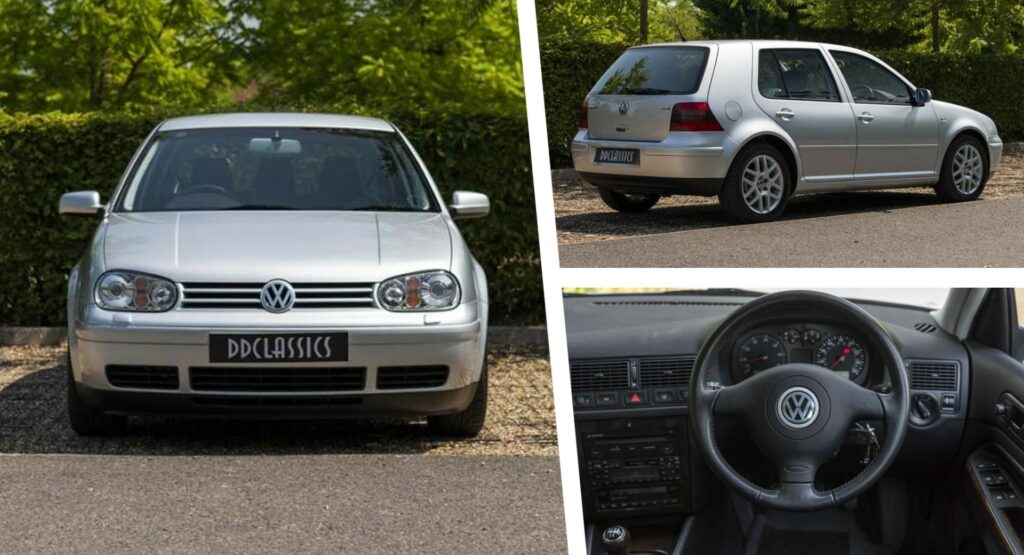 The VW Golf GTI is one of the most iconic hot hatches, as the model that started the segment back in 1975. As with everything in life, the GTI bloodline had its ups and lows, with the fourth-generation model considered one of the least special in regards of driving dynamics, although it represented a big step-up in terms of build quality. Fans of this hot hatch underdog will be delighted to know there is a low-mileage example in pristine condition offered for sale in the UK.

The car is listed on ddclassics.com as the oddball among a collection of supercars, hypercars, and sought-after classics. While there is nothing special about its spec – unlike the delivery-mileage GTI 25th Anniversary Edition that was sold last year – the unique thing about this Golf is its condition and the odometer reading. Since 2001, it has traveled a total of 3,400 miles (5,472 km), which equals an average of 162 miles (261 km) per year. This number is surprisingly low for a mainstream compact hatchback, making us believe that whoever bought it had plenty of other cars to choose from, or just didn’t enjoy driving.

Also Read: The VW Golf Might Not Get A New Generation After All

The fourth-gen Golf was introduced in 1997, but the pictured GTI comes from 2001. Despite its age, the owner – who passed away in 2021 – did an amazing job in preserving it in showroom condition after all those years, treating it as a garage queen. The Reflex Silver exterior shade doesn’t show any signs of wear, and the same applies to the 16-inch BBS alloy wheels which came standard. Back in the day, those were the only way to distinguish the GTI from a regular Golf, alongside the badge on the tailgate and the hidden dual exhaust pipes. VW didn’t bother to design a more aggressive bodykit for the GTI, reserving it for the flagship Golf R32.

Inside, the black leather upholstery on the heated Recaro bucket seats, the plastics on the dashboard, and the faux wood accents on the center console are as good as new. Even the roofliner which is known to fall in VWs from this era is still tight, contributing to a time-capsule effect. The model is right-hand-drive, registered in London, UK. It was a special order with a lot of optional features including rain sensors, cruise control, xenon headlights, a dimming rearview mirror, and a winter pack. Don’t expect any kind of infotainment though, as it comes from the pre-screen era.

Also Read: Does The VW Golf GTi Clubsport 45 Do Justice To The Iconic Hot Hatch’s Anniversary?

Judging from the five-speed manual gearbox and the 16-inch wheels, this Golf GTI is fitted with the older version of the turbocharged 1.8-liter 20V four-cylinder engine producing 148 hp (110 kW / 150 PS), as in the closely-related Audi A3 1.8T. This specification was available between 1998 and 2001, and as you would expect it didn’t offer hot hatch levels of performance, lagging behind most of its rivals. For the last years of the Golf Mk4 production (2001-2003), VW upgraded the GTI with a more powerful version of the same engine producing 177 hp (132 kW / 180 PS), and a six-speed manual gearbox.

The listing doesn’t put a price on the time-capsule Golf, but we don’t expect it to fetch a surprising amount of money since it’s hardly a collectible piece. However, cars from this era are becoming “youngtimers” for the new generation, so there might be a buyer falling for nostalgia. How much would you spend on an underpowered and visually underwhelming hot hatch from the early ’00s?