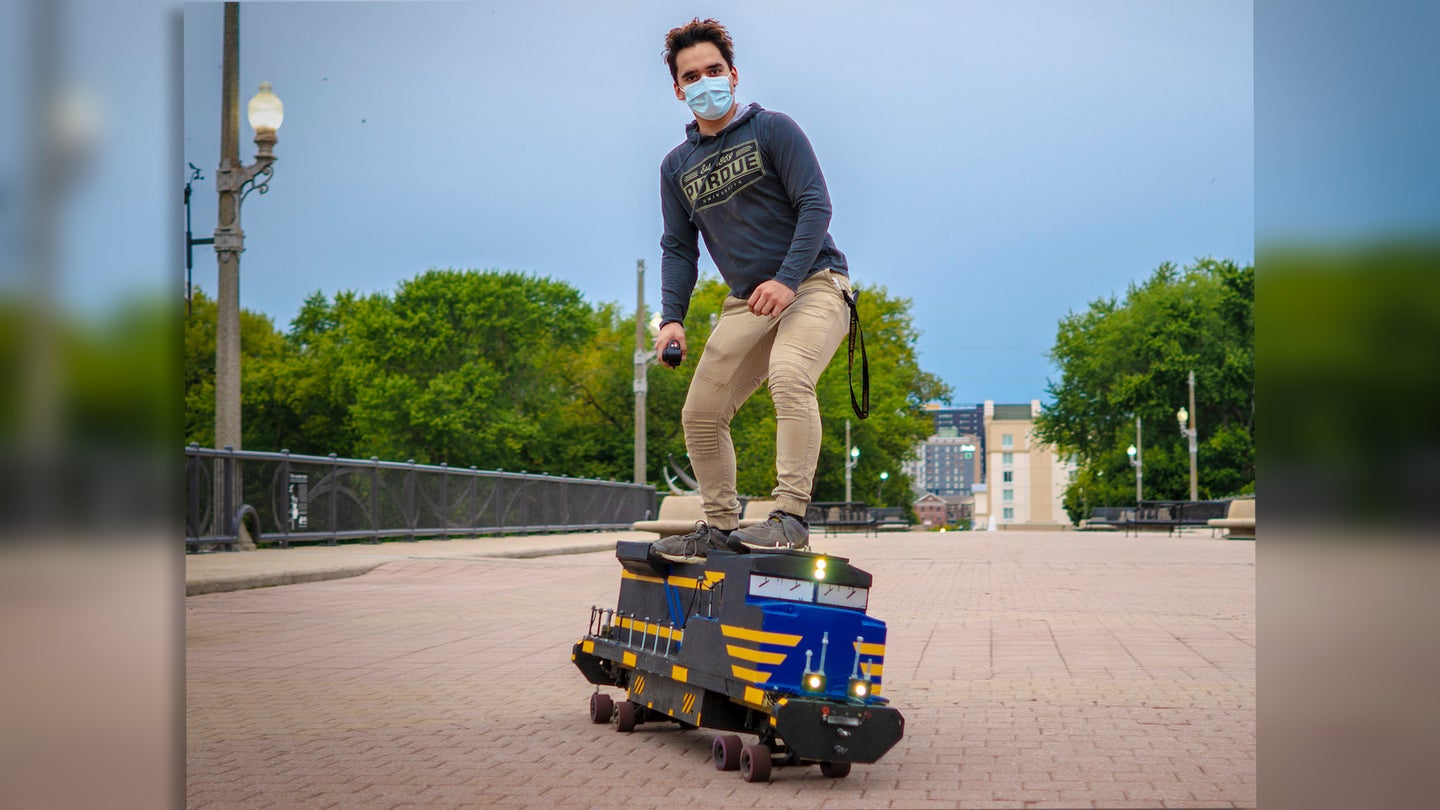 If the United States can’t finish a simple dang high-speed rail line or city subway, maybe it’s about time we citizens start building trains ourselves. Tracks be damned; we’ll just ride them on the sidewalk or street. In fact, one Purdue University undergrad already does with a scaled-down locomotive he built from scratch using electric skateboard parts and old car batteries.

For a couple of years now, Ramon Pardo has been one of the most distinctive sights on the Purdue campus in Indiana, riding around what looks like a shrunken diesel train locomotive. Taking time out of his studies, Pardo told me that he has inexplicably been drawn to trains since childhood, and that the fascination is actually why he ended up at Purdue in the first place. He found out about its mascot—the Boilermaker Special—and the rest was history. Upon joining the Purdue Railroad Club, however, Pardo realized that his fantasy of owning his own full-sized locomotive is prohibitively expensive, and possibly just a pipe dream. But one night while gaming, Pardo accidentally knocked over his longboard, and watched it roll across the room. A lightbulb went off: He could just build a rideable, human-scale train of his own using longboard parts.

Pardo spent the subsequent six months designing his first prototype, and then another four months building it. As it turned out, Pardo’s project wasn’t one you can buy parts off the shelf for. There are no appropriate electric skateboard components, and no belt or direct drive options. He had to engineer around many of the problems himself, even designing his own chain drive, before taking his first ride—which ended in a breakdown after only an eighth of a mile.

But Pardo was undeterred and has since redesigned his train board several times (sometimes after more breakdowns) over the course of more than a year to reach the current specification. Modeled after an EMD SD70ACe, Pardo’s current build rides on six Caliber II longboard trucks, which he chose for their durability and predictable skateboard behavior. They’re sprung to smooth the ride, which is also helped by the weight of multiple lead-acid car batteries—so chosen for being safe and cheap (though not disposable in the ocean as Google would have you believe).

These batteries aren’t light though, and account for 60 to 100 pounds of weight depending on the configuration. They’re down low to serve as ballast, but the whole thing still weighs over 200 pounds at its heaviest and nears 400 with Pardo on it—enough to make discount skateboard trucks “explode” when he hits a pothole. Much of that mass is also relatively high up, as while longboarders usually ride a matter of inches from the ground, Pardo has to stand nearly two feet in the air to ride his train. That gives it dynamics like those of a longboard, except taken to the extreme.

“There are a few degrees of ‘dead space’ on a normal longboard that is not typically noticeable,” Pardo told me. “When you’re riding a normal longboard or skateboard, you don’t typically ever notice this, because your body almost naturally adapts to this with your ankle. On the train, however, going on a tilted surface or compensating for this dead zone is something I have to do with my whole body.

“Despite this issue, it’s interesting to note that for most intents and purposes, I do not get speed wobbles,” he continued. “The train is simply too big, long, and heavy to develop them in a manner that can throw me off.”

It bears saying that the weight doesn’t hurt the board’s performance. If anything, it helps going downhill, where Pardo says he’s hit 22 mph. That’s down to a quartet of 750-watt brushless motors (totaling around four horsepower) which can propel the board almost 30 miles on a full charge. Pardo thinks 60 miles of range may be possible with some upgrades, which could also include filling out space allotted to motors for eight in total. That’d give him about 8 hp, which doesn’t sound like much, but would let him tow up to 1,000 pounds on flat ground. That’ll come in handy when Pardo starts adding train cars to the equation.

The legality of riding the little locomotive on public roads likely varies state by state, but Purdue evidently hasn’t had a problem with it. Pardo has all sorts of ideas for rolling stock he could tow behind him, each with unique functions. Boxcars and flatbeds could hide extra batteries and offer space for cargo or for passengers. A center beam car, used at full scale for hauling lumber, could carry reams of paper around campus to help Pardo keep printers stocked. Hoppers could spread salt on bike lanes in the winter, and a tank car he’d just fill with coffee, because he thinks it’d be funny. (Damn straight dude.)

All that, though, will cost more time and money, of which Pardo has already spent a lot. He said he’s easily in more than $5,000 so far, though he emphasized most of that has gone toward development, and that the train as it exists today is much cheaper. With blueprints and tools in hand, Pardo estimates someone could follow in his footsteps for the investment of about 40 hours and $1,000.

But as of right now, Pardo’s merely trying to retrace his own steps following the derailment of more than just his project. In late August, Pardo’s insurance dropped him, leaving him to pay the exorbitant cost of medicating a chronic condition out-of-pocket. That same day, a massive internal battery short destroyed the train’s entire battery bank, worth hundreds of dollars.

Pardo’s classmates told him to start a GoFundMe (linked in the comments), but it’ll be a while before Pardo can rebuild and continue testing—never mind help people build rideable trains of their own. Pardo said that if his project gets enough attention, he may share instructions, video tutorials, or even sell build kits. It’s easy to see those going down well, especially as demand for affordable electric personal transport explodes worldwide. E-bikes and one-wheels have caught on for good reason, but many are bound to want more individuality. And people like Pardo show that no matter how we get around in the future, self-expression will never have to go by the wayside.

The post Riding the Train: DIY Skateboard-Based Locomotive Can Hit 22 MPH appeared first on The Drive.