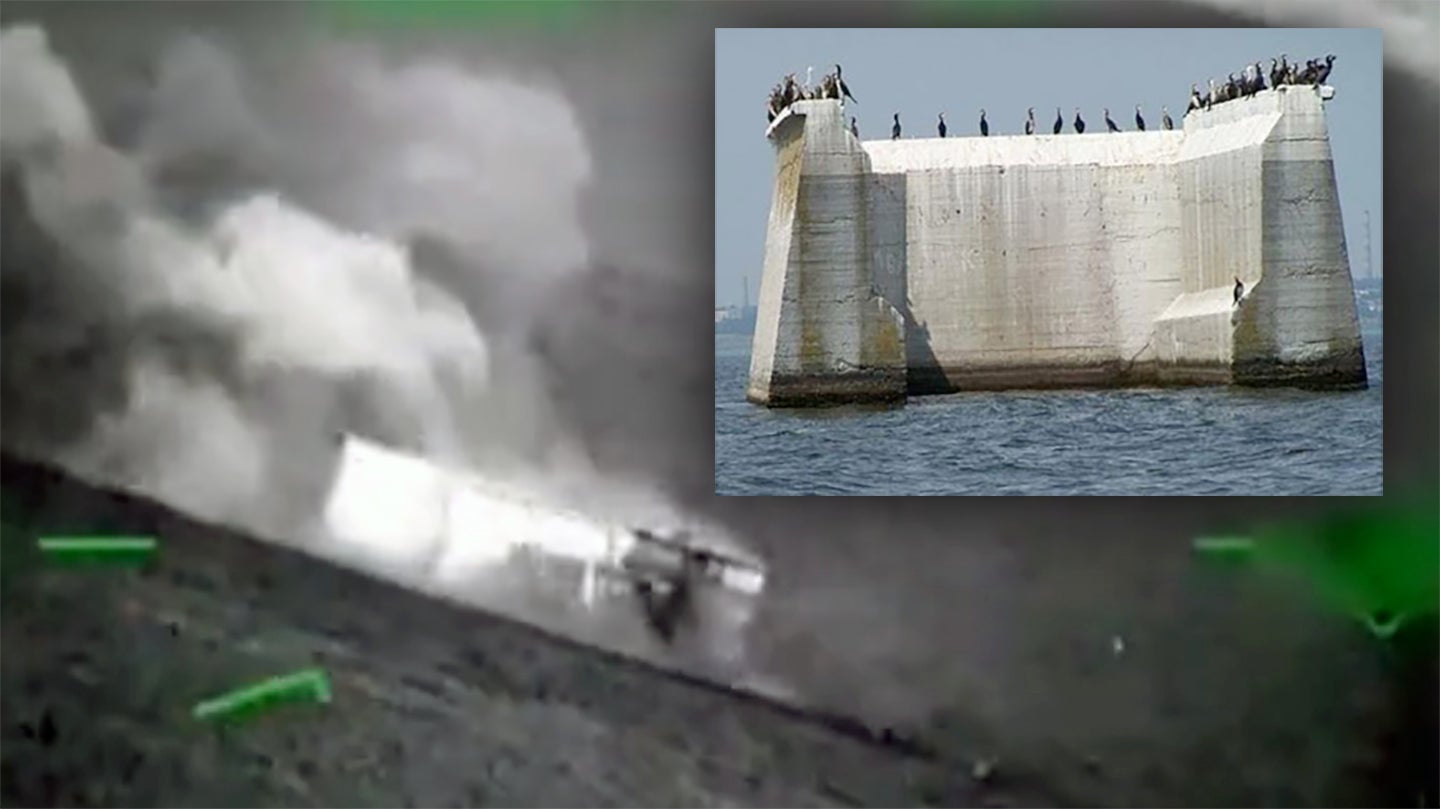 Via Russian MOD and Dnepr.info

The Russian Ministry of Defense claims that a Ka-52 Alligator attack helicopter recently scored two direct hits on what it says was a barge full of Ukrainian special operations forces attempting to cross the Dnipro River to assault the Zaporizhzhia nuclear power plant.

Whatever the helicopter’s missiles hit was not a barge, was occupied only by seabirds, and was, in actuality, a large concrete bridge support anchored to the riverbed since World War II. The mass of concrete is a relic of the Nazi occupation of Ukraine when the Germans built a span across the river and later blew it up.

Cockpit footage of the strike released by the Russian government on September 14, shows the Ka-52 pilot using his targeting system to aim at a large, rectangular object in the middle of a river. He fires a Vihkr missile, which scores a direct hit on the target. The coaxial-rotor attack helicopters have been a staple air-assault platform in Russia’s all-out invasion of Ukraine.

“A group of Ka-52 attack combat helicopters was tasked to prevent the redeployment of the units from special operation forces of the Armed Forces of Ukraine (AFU) across the Dnepr [Dnipro] river and to eliminate the enemy forces that were carrying out an offensive near Zaporozhye [Zaporizhzhia] nuclear power plant,” the Russian MoD said in a statement. Location names like the river and power plant have different spellings according to transliterations from Russian or Ukrainian.

But, the Russian MoD then said in a statement that the helicopter fired 9K121 Vikhr ‘laser-guided rockets’ at a barge carrying Ukrainian special operations troops across the Dnipro.

“The crew detected a barge of AFU servicemen aboard 15 km away using a search and track system,” the Russian MoD said. “The target was attacked by two Vihkr guided missiles and neutralized.”

But, alas, the target was already very neutralized, as it was a stationary pylon belonging to a bridge over the river the Nazis worked to build more than 80 years ago, not a barge full of Ukrainian special operators. It is located just to the east of the nuclear plant.

A flock of seabirds flees the structure as the missile explodes against it. Then a second missile strikes the object, but what damage was done is unclear. A longer version of the video shows at least two Alligators flying in formation with an Mi-8/Mi-17 Hip-type armed transport helicopter before performing the now-familiar tactic of lobbing unguided rockets at enemy positions by pulling abruptly nose-up before firing. The Ka-52 then embarks on the bridge-pier strike, which without the ensuing Russian Ministry of Defense explanation, would seem like a perfectly reasonable weapons deployment exercise.

Firing missiles at a bridge support harboring nothing more than seagulls and pawning it off as a tactical win is not necessarily out of character for Russian messaging, particularly during the war in Ukraine.

Other recent examples include claims that Russian forces have destroyed several times more high mobility rocket artillery systems, or HIMARS, than the U.S. has donated to the country. Russian state media and propaganda outlets have routinely downplayed the tactical and strategic missteps and outright disasters that have befallen Moscow’s forces in the nearly seven-month-long conflict.

Before launching their ongoing offensive, Ukrainian forces systematically damaged or destroyed Dnipro River crossings to disrupt supply lines and routes of retreat for Russian troops on the north and east banks. The area has been the scene of heavy fighting that has thrown the Russian war machine into retreat. Releasing questionable combat footage like this speaks to the seeming desperation of Russian forces needing to post a win, or at least appear to be doing something to at least stanch the bleeding in the international public eye. It could also be an attempt to show that Russia’s airpower is active, despite its inability to slow Ukraine’s advance westward.

Framing this attack as if it was in defense of the Zaporizhzhia plant is also clearly calculated. Located on the eastern bank of the Dnipro, is home to the nuclear power plant that Russia has occupied since March. The plant is a constant source of worry as Russian forces have stashed ammunition and parked combat vehicles there. Nearby artillery shelling has threatened the power at the facility, which is Europe’s largest nuclear power plant. The plant’s six reactors are now shut down in an attempt by the International Atomic Energy Agency (IAEA) to avoid a catastrophic incident.

Ukrainian armed forces would need to cross the Dnipro — the same river they recently made into a hard-to-traverse obstacle to Russian forces — to secure Zaporizhzhia, which normally supplies a significant amount of Ukraine’s electrical power. Therefore, barges and boats are likely methods of crossing but they would unlikely sail one at a time with small SOF units in broad daylight, a move that would invite strikes by Russian forces defending the plant. There are no signs that such an operation is imminent, regardless.

Russian propaganda has repeatedly attempted to rewrite the course of this war, to no avail. The sorts of self-owns handed down by the Russian government, like trying to pass off shooting a block of concrete as a tactical win against Ukrainian special operations forces in defense of the nuclear facility it dangerously occupies, inspire little confidence in Moscow’s ability to hold the ongoing Ukrainian advance at bay.