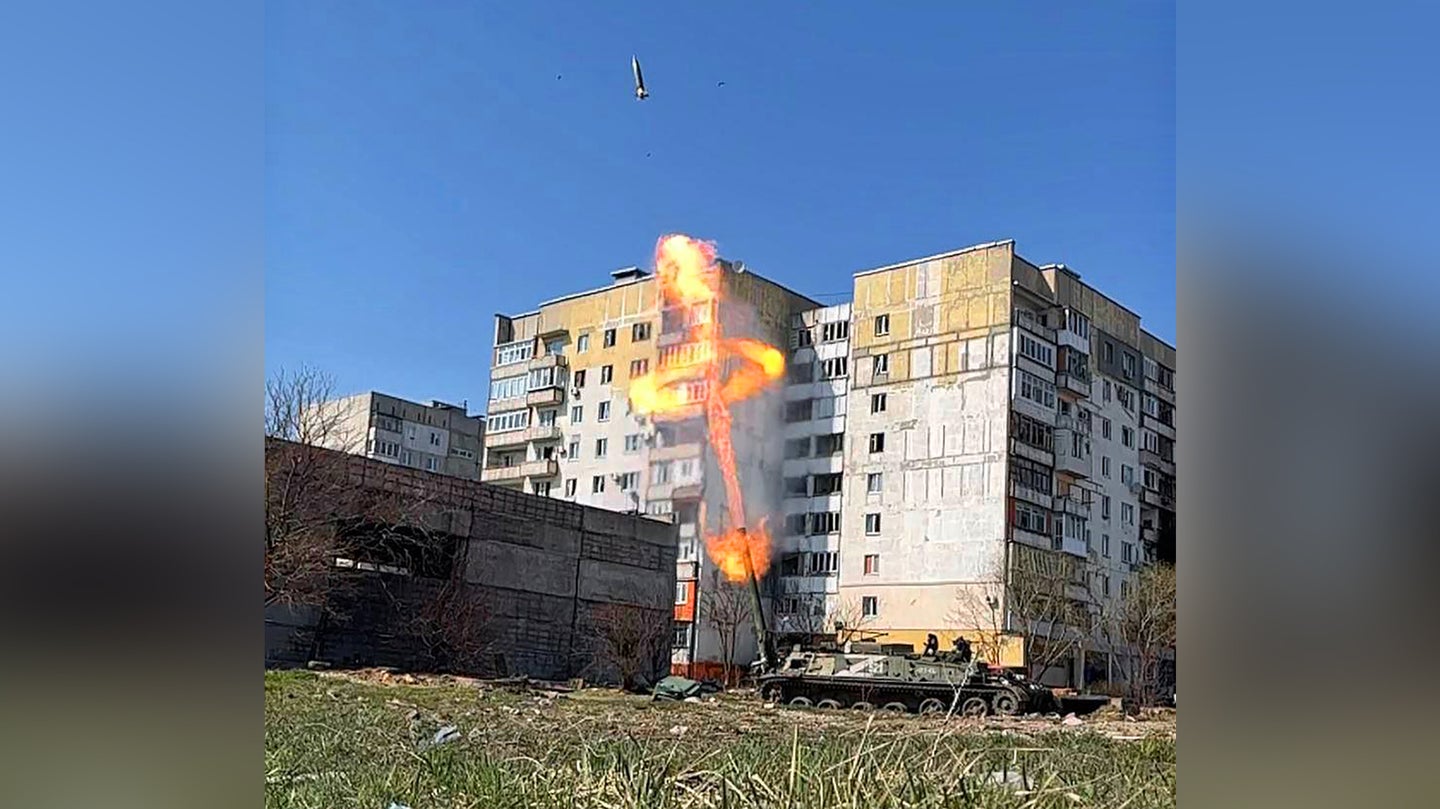 An image has emerged online reportedly showing that Russian forces are now using 2S4 Tyulpan 240mm mortars, the largest weapons of this general type in service anywhere in the world, to fire laser-guided rounds at the Azovstal steel plant in the southern port city of Mariupol. The news comes just days after Ukrainian fighters inside the complex insisted surrender was not an option.

The self-propelled 2S4 mortar, which uses a modified tracked chassis based on the one used for the Krug (SA-4 Ganef) surface-to-air missile system, first entered service with the Soviet Army in 1975. A crew of nine typically operates a single one of these weapons, with four crew members riding on the self-propelled mortar itself and the other five following behind in a support vehicle. The Tyulpans – Russian for ‘Tulip’ – possess relatively limited range and have a low rate of fire of only around one round per minute. This is in large part due to the massive rounds they fire.

Historically, the 2S4s have typically been used to fire unguided 290-pound or 500-pound high explosive rounds, the latter of which has a range-extending rocket booster. It can engage targets out to around 6 miles with standard ammunition and 11 miles away when using the rocket-assisted type. In the 1980s, the Soviets developed a laser-guided round, called Smel’chak, for the 2S4, which has a maximum range of 5.7 miles.

An autoloading system feed rounds into the mortar from two drum-type magazines, which can hold a total of 40 standard high-explosive projectiles or 20 long-range rocket-assisted ones at a time. It’s unclear how many laser-guided shells can be loaded into the system at once. The 2S4 has a small onboard crane to hoist rounds into its magazines.

When fired, the barrel emanates an ominous bell-like ring.

The round seen in the picture at the top of this story reportedly being fired at the Azovstal complex is clearly a laser-guided Smel’chak, which has a completely different shape compared to the unguided ammunition for the 2S4.

Smel’chak was originally designed to be employed in conjunction with a forward artillery observer who would use a portable laser designator to “paint” the target. Other platforms equipped with laser designators, such as drones, could conceivably perform this function, as well.

Exactly why the Russians might be employing Smel’chaks in their ongoing siege of the Azovstal steel plant, which is located in the southern port of Mariupol and is known to be the last stronghold of Ukrainian forces in the city, is not entirely clear. At this point, Russian ground forces are basically knocking on Azovstal’s front door and are known to be conducting near-constant air and artillery strikes on the complex using unguided munitions with virtual impunity.

However, the complex sits on top of a maze-link tunnel network that has been helping to shield the defenders from these bombardments. The value of a laser-guided munition to target specific weak points or even try to seal tunnel entrances and exits could be a tactical motive for explaining the recent utilization of these rounds. The extremely close proximity of Russian forces to the facility also means the Tyulpan’s limited 5.7-mile range with this munition is essentially a non-issue.

This is also just an interesting development given that Russia has been said to have an ever-dwindling stock of precision munitions of any kind. In addition, several sanctions imposed by the United States and its allies have strangled Russia’s ability to restock weapons of various types, especially advanced systems that require specialized electronic components. With that in mind, it had hardly been surprising to hear that the Russian military was primarily striking Azovstal with unguided munitions by the end of April.

Russia’s unrelenting assault has raged on despite the fact that most of the Russian ground forces have been redirected North to meet the demands of more urgent offensives, with a small number of battalion tactical groups remaining insistent on overtaking the plant.

With the Ukrainian military claiming that they will jump on any possible opportunity to carve an exit path out of the Azovstal steel plant, perhaps the Russians are using the precision munitions they have left in an attempt to prevent that evacuation from happening.

The post Russia Fires World’s Biggest Laser-Guided Mortar Round In Ukraine appeared first on The Drive.