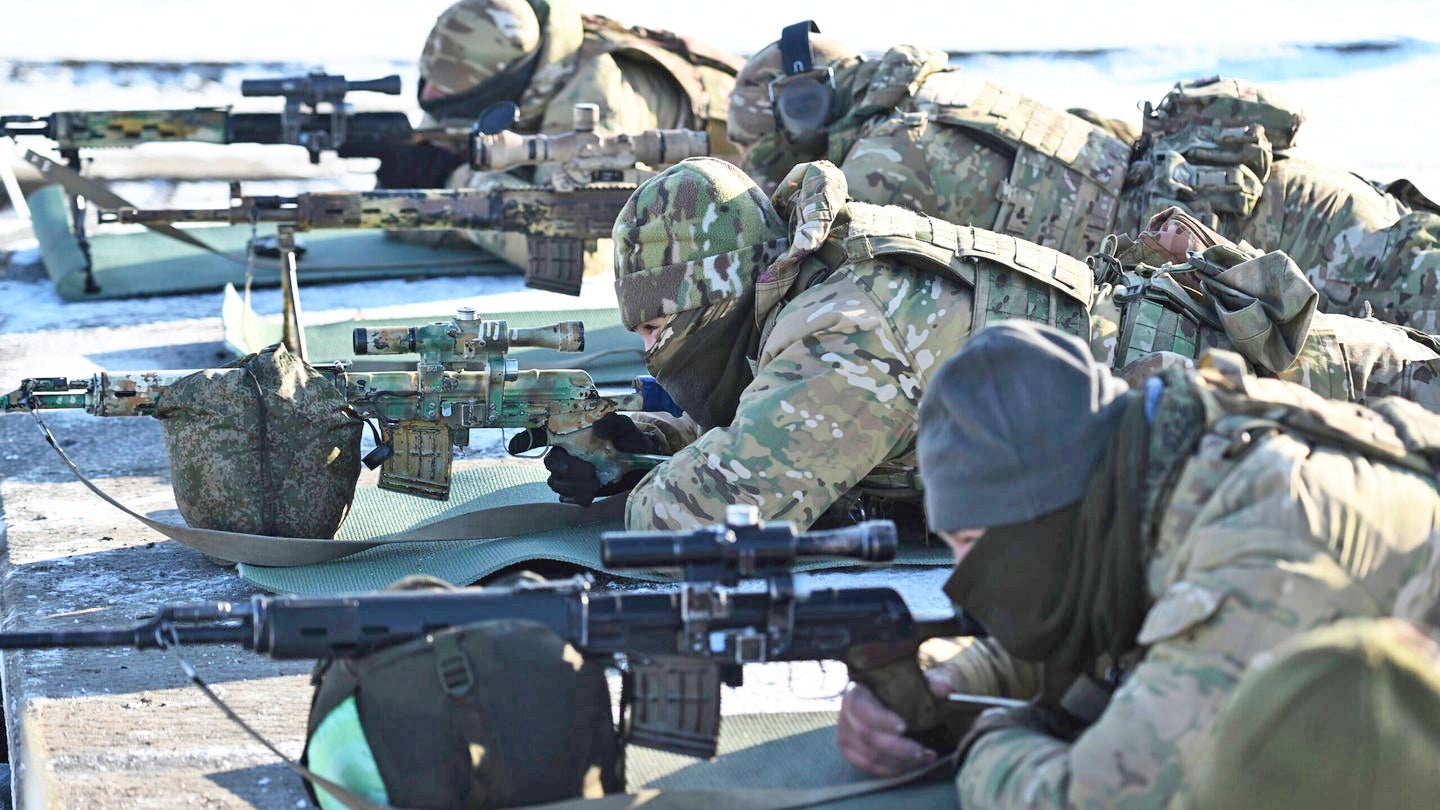 The Russian military has launched a series of snap drills in the far east of the country, leading to speculation that additional forces could be being prepared to move west, closer to the border with Ukraine, where Moscow has been steadily massing troops and equipment as fears of a potential invasion of that country grow. These military maneuvers in the far east of Russia come after talks between Russian and Western officials to address the worsening security situation ended in a stalemate. At the same time, a large-scale cyberattack targeting Ukrainian government websites has occurred.

The Russian Ministry of Defense today released footage of the snap drills in the Eastern Military District, including armored vehicles and other military equipment being loaded onto trains as part of what it described as an inspection drill to practice deploying over long distances. “Some formations and units are being transferred to unfamiliar training grounds at a considerable distance from their points of permanent deployment,” Russia’s state-owned RIA Novosti news agency reported. “Particular attention will be paid to the possibilities of transport infrastructure for the movement of military personnel and equipment.”

While the final destination of this equipment is unclear, there are concerns it may be transported closer to the frontier with Ukraine or, otherwise, these are elements being moved as a diversionary tactic to cover other developments in the western border region.

Whatever the ultimate objective of these movements in the far east, it seems clear that Moscow is presently unwilling to try and take action to reduce the level of tensions with the West without the U.S. and its NATO allies meeting a series of demands. These tensions have recently been exacerbated by the continuing Russian military build-up close to Ukraine’s borders, now numbering around 100,000 troops, roughly two-thirds estimated to have been deployed from elsewhere. There has also been alarm about the Russian-led intervention, in a “peacekeeping” capacity, in response to the violent unrest in Kazakhstan; troops from that deployment are now returning to Russia. At the same time, a war of words continues between Russia and NATO, focused especially on military deployments and the alliance’s relationship with Ukraine.

Fears of a potential new Russian campaign directed against Ukraine surfaced back in January 2021, but many of those forward-deployed forces were subsequently withdrawn before units flooded back into the border regions during November and December.

UKRAINIAN MOD VIA MILITARY TIMES
A Ukrainian military intelligence map showing Russian military dispositions as of last Nov. 15, with around 40 “battalion tactical groups,” or BTGs, each with between 700 and 900 personnel.

As it stands, Russia and Ukraine have already been engaged in conflict since 2014 when Moscow launched an operation to seize the Crimean peninsula before deploying capabilities to support separatists in eastern Ukraine fighting the government in Kyiv.

Some have posited that Russia has been using its latest troop movements in the regions around Ukraine’s borders as a tool to try and gain a guarantee from NATO that Ukraine and Georgia will not be permitted to join the alliance in the future, as well as the possibly satisfying other demands. These include the removal of troops and equipment from NATO member states in Eastern Europe, returning to 1997 levels, before a wave of NATO expansion in the region. Russia denies it has plans to attack Ukraine but says it could take unspecified military action unless its demands are met.

While NATO and the United States have rejected these demands, the West has signaled openness to negotiations around arms control, missile deployments, military exercises, as well as confidence-building measures to dial down the current tensions.

Throughout, however, the Ukraine issue has been paramount, with Russian Foreign Minister Sergei Lavrov stating: “We categorically will not accept the appearance of NATO right on our borders, especially so given the current course of the Ukrainian leadership.”

This issue, and others, have been discussed in the joint security discussions between Russia and the West that ended yesterday, apparently with little agreement between the two parties after successive rounds of talks. Previously, Lavrov had said that a failure of those talks could lead to Russia taking “measures to deploy military hardware.” He added: “When we take decisions with military hardware we understand what we mean and what we are preparing for.”

As the talks ended unproductively, Russian Ambassador to the Organization for Security and Cooperation in Europe (OSCE) Alexander Lukashevich described the outcome at the talks as “really disappointing,” before warning of possible “catastrophic consequences” if the two sides could not agree on what Russia has described as security “red lines.”

“The drumbeat of war is sounding loud,” Michael Carpenter, U.S. Ambassador to the OSCE, said when the security talks concluded Thursday.

“The threat of military invasion is high,” White House National Security Advisor Jake Sullivan told reporters. “There are no dates set for any more talks. We have to consult with allies and partners first.”

Within hours of the talks ending, Ukraine’s government-owned digital infrastructure was hit by a so-far unattributed cyberattack. A message placed by hackers on the website of the Ukrainian Foreign Ministry stated: “Ukrainian! All your personal data was uploaded to the public network. All data on the computer is destroyed, it is impossible to restore it.” The message was written in Ukrainian, Russian, and Polish and it also showed the Ukrainian flag and map crossed out.

In all, the websites of around 70 government departments, including the cabinet of ministers and the National Security and Defense Council, were affected. While Ukrainian officials have not directly blamed Moscow for the cyberattack, they did refer to the “long record” of Russian activity against Ukraine in the cyber domain.

In the first 10 months of last year alone, Ukraine was hit by around 288,000 cyberattacks, according to official figures, while there were around 397,000 in 2020. In one significant attack in 2015, parts of the country’s power grid were temporarily knocked out.

Officials from other countries have also warned of the threat of potential conflict. Addressing the OSCE, Polish Foreign Minister Zbigniew Rau said: “It seems that the risk of war in the OSCE area is now greater than ever before in the last 30 years.”

According to Russian Deputy Foreign Minister Sergei Ryabkov, Russian military specialists have been providing President Vladimir Putin with options in case the Ukraine situation worsened. However, Ryabkov would not confirm or deny rumors that Moscow may deploy military assets to Cuba and Venezuela, as a counterweight to NATO’s continued presence in its eastern member states.

However, Ambassador Lukashevich told the OSCE that Moscow may be forced to “take all necessary measures to ensure strategic balance and eliminate unacceptable threats to our national security,” which could potentially include establishing forces in other locations to assert more pressure on NATO.

For the United States, the immediate fear seems to be based on Russia launching some kind of military intervention in Ukraine after “fabricating a pretext for an invasion, including through sabotage activities and information operations, by accusing Ukraine of preparing an imminent attack against Russian forces in eastern Ukraine,” in the words of National Security Advisor Sullivan.

Additional U.S. intelligence apparently also reveals that Russia has been moving military helicopters, as well as attack aircraft, closer to Ukraine’s border. Although the locations of these movements have not been revealed, unnamed U.S. officials have confirmed the development to the New York Times, suggesting that it’s a possible sign that planning for an attack continues.

At the same time, however, the number of Russian troops at Ukraine’s border has remained steady in recent weeks, despite U.S. intelligence predictions of a surge. While official Ukrainian reports suggest that there are now approximately 100,000 Russian troops in the areas adjacent to the borders with Ukraine, the Washington Post has published a story stating that U.S. intelligence assesses the figure to be smaller, at around 70,000 Russian troops, but that Moscow is planning a large-scale intervention into Ukraine involving at least 175,000 personnel on the ground. With this in mind, Russia’s snap drills will be watched very carefully for the possibility of large movements of personnel and materiel west toward Ukraine to bolster the forces already deployed there.

With negotiations collapsing and rhetoric soaring, it seems that this crisis has entered a new, highly tumultuous phase. Russia is playing a game of very high-risk brinksmanship and nobody seems to have a clear idea how it will unfold.