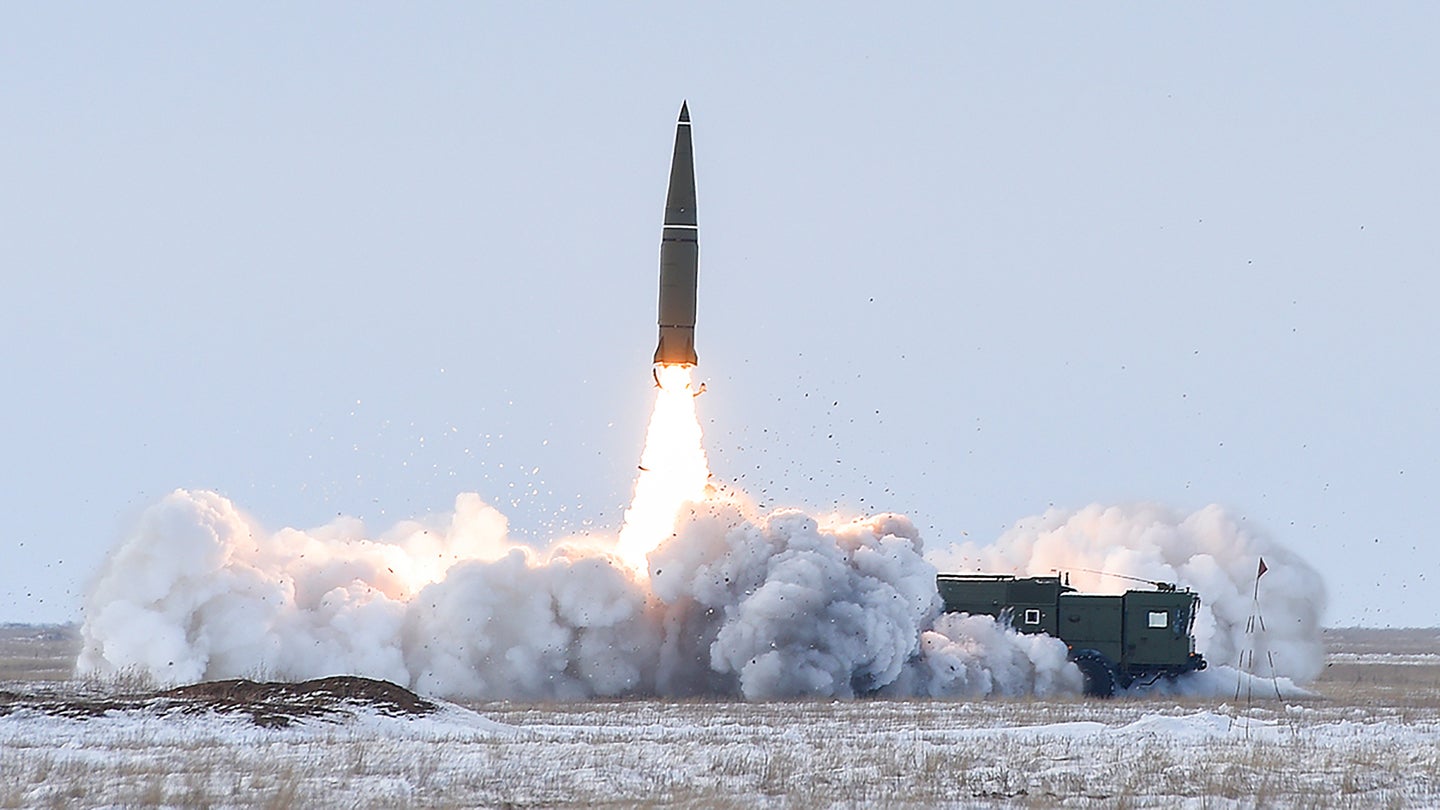 At a meeting in Saint Petersburg on Saturday, Putin announced the transfer alongside Belarusian President Alexander Lukashenko who has grown closer to Moscow after it helped quell domestic unrest over his decades-long control of the country. According to a Reuters report, Lukashenko asked for a “symmetrical response” to claimed nuclear-armed flights by NATO aircraft near Belarusian borders.

Putin also floated the possibility of upgrading Belarusian Air Force Su-25 Frogfoots to carry nuclear weapons. This was an interesting statement as one could argue Belarus’s MiG-29s would have been a better choice for such a role. It’s not clear based on either leader’s statements exactly how this transfer or command control over these weapons and their potential nuclear warheads would work,

Russia and Belarus are growing increasingly indistinguishable since Russian troops and equipment deployed to the former Soviet republic ahead of their invasion of Ukraine. Russian forces then used Belarus to invade Ukraine and launch missile attacks on the country. There have been fears, especially early in the invasion, that Belarus could become involved in the conflict directly, potentially launching another prong of the invasion into the northwestern part of Ukraine. This is still a possibility, especially considering the news that Russia could arm the country with nuclear weapons. It’s also worth noting that Russian Iskander missiles were part of the months-long buildup to war in Ukraine and have been in Belarus since at least January and have been fired into Ukraine from there.

With this in mind, it’s entirely possible that ‘Belarusian’ missiles on paper could be Russian units, possibly equipped with Russian nuclear warheads aimed across NATO borders into neighboring Poland, Lithuania, and Latvia, and beyond into Estonia, Hungary Slovenia and the Czech Republic.

Putin deploying nuclear weapons to Belarus would further escalate already high tensions in the Baltic. Lithuania blocked Russia from using a rail line to ship goods to the military exclave of Kaliningrad on June 20 as part of ongoing sanctions in retaliation for the war in Ukraine. At Saturday’s meeting, Lukashenko said Lithuania’s decision amounted to “a declaration of war,” according to a report from Ukrainska Pravda.

The 9K720 Iskander-M short-range ballistic missile (SRBM), known to NATO as the SS-26 “Stone,” has seen extensive use in Russia’s war with Ukraine. Each launcher vehicle can carry two missiles with an official range of 310 miles, though they could potentially fly even further.

The 9M723 missile can carry up to a 1,500-pound payload including high-explosive, cluster munitions, fuel-air, bunker-busting, as well as nuclear warhead options. Use in Ukraine has subsequently revealed the missiles use penetration aids (PENAIDs) in the form of mortar-like decoys used to confuse enemy radars and interceptor missiles.

Russia has also used the missiles in its 2008 war with Georgia and in Syria. Armenia, the lone export customer and sole operator of the Iskander-E export version, used them in the 2020 Nagorno-Karabakh War.

The Iskander’s deployment to Belarus may well bring a 25-year-old agreement between NATO and Russia further into question. On May 14, 1997, NATO Secretary General Javier Solana and Russian Foreign Minister Yevgeny Primakov agreed to the text of the NATO-Russia Founding Act on Mutual Relations, Cooperation and Security between NATO and the Russian Federation.

While at the time a landmark bilateral agreement between the Cold War adversaries, it makes specific mention of NATO’s “three no’s,” a December 1996 statement that the alliance had “no intention, no plan and no reason” to deploy nuclear weapons on new members’ territory, including former Warsaw Pact nuclear weapons storage sites.

NATO’s Nuclear Sharing program has 200 roughly B61 nuclear bombs stored at six airfields in Belgium, Germany, Italy, the Netherlands, and Turkey for the alliance’s use in the case of war, but there’s no public record of those or other nuclear weapons being deployed to former Warsaw Pact states. Nor is there infrastructure to support such deployments. In April, we wrote about a potential B61 basing plan in England.

In a tweet on Saturday afternoon, Heinrich Brauss, former NATO Assistant Secretary General for Defence Policy and Planning, specifically mentioned the three no’s in reaction to news of Iskanders in Belarus.

It’s neither the first time in recent history nor since Russia invaded Ukraine in February that the idea of NATO nuclear weapons in Eastern Europe has come up. On April 4, Polish Deputy Prime Minister Jaroslaw Kaczynski said the country would be “open” to the idea of American tactical nuclear weapons based there amid a call for more American troops, according to a report from Newsweek.

All of this may be well-timed bluster and domestic fanfare from the Kremlin and its ally in Minsk. The announcement coincides with the G7 Summit in Munich, Germany, and is fairly contemporaneous to the ongoing dispute over Kaliningrad.

With Putin’s new proclamation, it may not be long until NATO considers any Russian Iskander units in Belarus nuclear-armed even if it hasn’t declared so publicly.

The post Russia To Give Belarus Nuclear-Capable Iskander-M Missiles appeared first on The Drive.