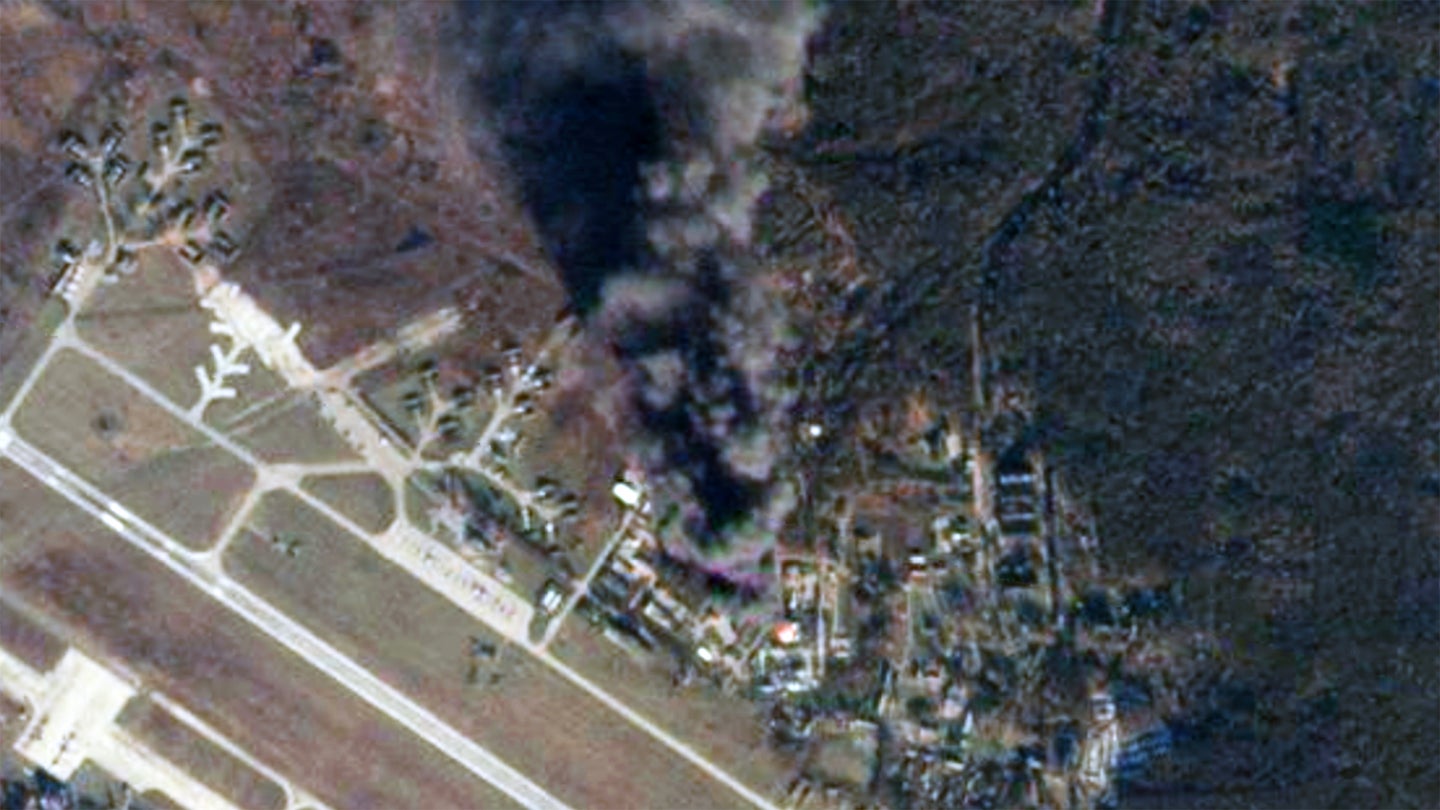 Russian authorities have blamed a Ukrainian drone strike for the fire that broke out this morning on a Russian airbase in the country’s southern Kursk region, around 60 miles from the Ukrainian border. The incident comes a day after explosions rocked two other more distant Russian airbases, Engels and Dyagilevo, which resulted in damage to at least one Tu-22M3 Backfire-C bomber and apparently also to a Tu-95MS Bear-H, which you can read about here. Russian and at least one Ukrainian official have now attributed those previous blasts to Ukrainian drone strikes. Moscow says those incidents involved the use of Soviet-era types, almost certainly referring to the jet-powered Tu-141 Strizh, originally built as a reconnaissance UAV.

The regional governor of Kursk Oblast, Roman Starovoy, took to the Telegram messaging service to state that the drone attack on Khalino Air Base today had ignited what he described as an “oil reservoir” — presumably a fuel storage depot — within the airbase’s perimeter. He added that fire crews were containing the blaze. Multiple videos posted to social media showed flames leaping up into the night sky early this morning; thick black smoke was also indicative of a fuel fire.

Khalino is a Russian Aerospace Forces facility that has played an important role in the war in Ukraine. The airfield is normally home to the 14th Guards Fighter Aviation Regiment with two squadrons of Su-30SM Flanker-H fighter jets. The regiment has a nominal strength of 24 of these jets.

There are meanwhile unconfirmed reports that another drone strike targeted a fuel depot in Lesnoye, in the Bryansk region. In this case, the drone, or drones, reportedly fell short of the target. This location is even closer to Ukraine, only around 30 miles from the nearest border.

Moscow blamed Ukraine for yesterday’s explosions at Engels and Dyagilevo and, since then, an unnamed Ukrainian official has told the New York Times that Kyiv was behind the raids. Hours after those blasts, Russia launched its latest cruise missile barrage against targets in Ukraine, suggesting that the drone strike may have been timed to disrupt this operation.

So far, however, Ukraine has not said it was behind the alleged drone strike on Khalino. This is in keeping with the previous approach, in which Kyiv’s officials have generally refrained from taking responsibility for actions that have been carried out on Russian soil.

However, there have now been repeated incidents at Russian airbases that suggest a deliberate Ukrainian policy of targeting these critical facilities, despite Ukraine’s apparent stance of deliberate ambiguity about these matters.

Very early in the conflict, there were reports that Ukraine had targeted Millerovo Air Base, less than 20 miles from the Ukrainian border, perhaps using a Tochka (SS-21 Scarab) short-range ballistic missile.

Reports that the bomber base at Shaykovka, about 140 miles north of the Ukrainian border, was hit by a Ukrainian suicide drone in early October proved inconclusive.

Otherwise, Russian airbases in occupied Crimea have also been subject to apparent Ukrainian attacks. The most dramatic such action targeted Saki Air Base in August, where blasts left at least 10 jets seriously damaged or destroyed. Also in Crimea, Russian reports linked a pall of smoke over Gvardeyskoe Air Base to Ukrainian actions, although available satellite imagery did not appear to show any apparent damage there.

There has also been at least one sabotage raid on a Russian airfield when Ostrov Air Base in the Pskov region was apparently infiltrated by operatives who detonated explosives placed on the helicopters there.

While the long distances involved in the attacks on Engels and Dyagilevo suggest that Russia’s account of Ukraine using adapted Tu-141 reconnaissance drones is likely accurate, an attack on Khalino Air Base could have been prosecuted using other types of drones, or even by other means.

Indeed, earlier in the conflict, there were claims that Turkish-made Bayraktar TB2 drones had been used to attack Russian targets in the Kursk region. These included fuel depots in Bryansk and Kursk that were struck during raids in April. Again, Kyiv declined to comment on its involvement or otherwise, although choosing targets of this kind makes a good deal of sense in terms of disrupting the supply of fuel to the Russian front lines.

Despite early successes, however, the TB2 appears to have more recently fallen from favor, likely as a result of heavy losses in the opening weeks of the conflict and the changing face of the ground and air defense threat.

There are, however, other drones available to Ukraine for attacks on Russian targets closer to its borders. Most notably, Kyiv’s forces have made use of adapted, commercially available drones, including one that looks to be available on the Chinese marketplace website Alibaba. A twin-boom drone matching this design was seen crashing into a Russian oil refinery in the Rostov region, on the border with Ukraine, in June. A similar-looking drone was also seen making an attack on Russia’s Black Sea Fleet headquarters in Sevastopol, Crimea. Prior to now, these kinds of modified off-the-shelf drones have been Ukraine’s only confirmed means of long-range strike and they have been used repeatedly in this conflict.

There is also evidence that the Soviet-era Tu-143 Reys reconnaissance drone — externally similar to the Tu-141 that was likely used in yesterday’s airfield attacks — has also been adapted for one-way strike missions. In June, a Russian official said that an example had been shot down in the Kursk region and photos emerged showing the wreckage of a Tu-143.

Only yesterday, meanwhile, reports emerged of a new Ukrainian-developed attack drone with a claimed range of 1,000 kilometers (621 miles). This UAV is apparently under development by the Ukrainian state defense firm Ukroboronprom, which says it has conducted a number of successful tests already, according to Ukrinform. This new drone is expected to be ready for combat before the end of the year and would add another potential means of hitting far-flung Russian targets.

Aside from drones, it should also be noted that there have been reports of Ukrainian Mi-24 Hind assault helicopters attacking infrastructure close to the Ukrainian border, in the Belgorod region.

While drones have also apparently been used against many non-airfield targets, the fact that Russian airbases, in particular, appear to be in Kyiv’s sights is significant for several reasons.

Firstly, these facilities are vital to the Russian air war, whether for launching cruise missile strikes or, in the case of Khalino, generating tactical airpower to support Russian troops and attempt to wrest control of the air. As far as offensive missions are concerned, air-launched cruise missiles have become more important as Russia has depleted its stocks of ground-launched and naval-launched standoff weapons. Even converted nuclear air-launched cruise missiles appear to have begun to be used, even if only as decoys.

Secondly, Ukraine’s apparent ability to hit Russian airbases calls into question, once again, the ability of Russian air defenses to protect these key installations, which have strategic importance above and beyond the war in Ukraine.

At the same time, even though the damage inflicted may be fairly limited, the fact that Ukraine is able to strike back against its aggressor in this way is of enormous propaganda value.

Just as significantly, it seems that the Russian military may well be aware of the risk — and the apparent difficulties in defending against these attacks. At Dyagilevo, for example, protective walls to protect against shrapnel and blast have been constructed only recently along the flight lines, supported by ad-hoc walls of tires. This, of course, is hardly a ringing endorsement of the local air defenses at the base, although at least some airfields closer to Ukraine have had their organic ground-based air defenses bolstered since the start of the war. Similar developments were apparent at the Russian airbase in Khmeimin, in Syria, after that base became subject to drone attacks.

In its influential daily intelligence update on the war in Ukraine, the U.K. Ministry of Defense (MOD) described the airbase attacks yesterday as “some of the most strategically significant failures of force protection since its invasion of Ukraine.”

As a result, the U.K. MOD noted that we might start to see increased efforts to disperse Russian bombers to other airfields. That brings its own problems, however, not least that Ukraine has shown that it can hit airfield targets with a reasonable degree of precision even at a range of 300 miles or more from its borders. The MOD adds that “The Russian chain of command will probably seek to identify and impose severe sanctions on Russian officers deemed responsible for allowing the incident.”

As well as moving bombers, and potentially other aircraft too, Russia will “take the necessary measures” to improve the levels of protection at its critical military facilities, according to Kremlin spokesman Dmitry Peskov.

Peskov admitted that “the Ukrainian regime’s course for [the] continuation of such terror attacks poses a threat.”

Clearly, whether it acknowledges responsibility or not, what now looks like a deliberate campaign targeting Russian airbases is a very significant development. At the most basic level, it provides a means for Ukraine to steadily chip away at Russia’s airpower capabilities, and force redeployment of aircraft and air defense systems. More broadly, stepping up these kinds of attacks — and demonstrating the ability to take the war deep within Russia — also signals Kyiv’s continued resolve at a point when some are campaigning for a negotiated settlement between Russia and Ukraine.