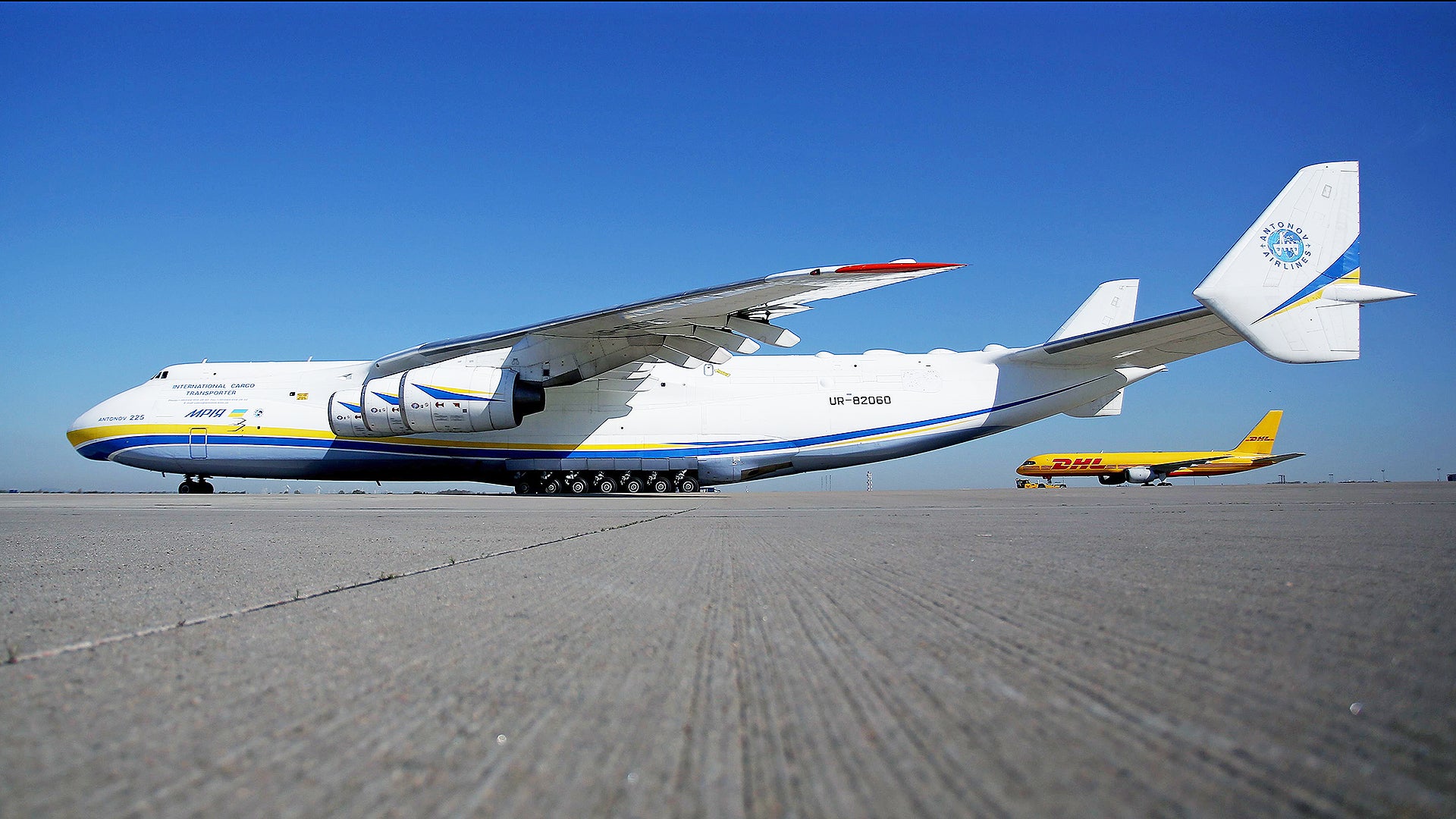 The fate of the world’s largest fully operational aircraft is uncertain in light of Russia’s invasion of Ukraine. The one-off Antonov An-225 Mriya, from the Ukrainian “Мрія,” or “Dream,” has been at Hostomel (or Gostomel) airport northwest of Kyiv since it landed there on February 5. While there has been heavy fighting at the airport, there are unconfirmed reports that the Mriya is still intact, at least for now, although it is now in Russian hands.

AP
Ukrainian President Volodymyr Zelensky speaking in front of the An-225 Mriya at the Antonov aircraft factory in Kyiv, Ukraine, in May 2021.

The An-225 is based at Hostomel Airport, sometimes referred to as Antonov Airport, which is used primarily as a commercial cargo hub. The airport is owned by the maker of the An-225, the Antonov aircraft manufacturing company, and is currently operated by its subsidiary, Antonov Airlines. According to FlightAware.com, the An-225 is confirmed to be at the airport after flying there from Billund, Denmark nearly three weeks ago.

It’s not clear if this means entirely undamaged or if it means the aircraft remains more or less intact.

Wikimedia Commons/Vasiliy Koba
An-225 in all its glory.

The Mriya is powered by six Progress D-18 turbofans and has a wingspan of 290 feet, the largest in the world aside from Stratolaunch’s experimental Roc launcher aircraft. The plane carries as much fuel as fourteen 737-800s.

Wikimedia Commons/Matti Blume
The engines of the An-225.

One of the primary roles the An-225 was designed for was to airlift the Energia rocket boosters and Buran orbiters for the Soviet space program, similar to NASA’s highly-modified Boeing 747 Shuttle Carrier Aircraft.

Wikimedia Commons/Vasiliy Koba
A Buran reusable space shuttle on the back of the An-225 Mriya.

Following the collapse of the Soviet Union and the cancellation of the Buran program, the Mriya sat dormant between 1993 and 2000. In 2001, the aircraft was refurbished for charter operations.

More recently, the truly massive aircraft was used to transport medical supplies around the world in response to the COVID-19 pandemic.

AP
Crews loading more than eight million protective face masks onto the An-225 to be sent from China to Germany in April 2020.

CNN’s Matthew Chance, on location at the airport, said that the commander of the Russian airborne unit confirmed to him that they have taken control of the airport.

Reuters reported earlier that Ukrainian officials said they had downed three Russian helicopters as they attacked the airport. There are also claims that the runway at the airport has been damaged, but these remain unconfirmed as of now.

The An-225 at Hostomel airport is the only one in existence, although a partially-completed fuselage of another has sat for decades at an Antonov plant outside Kyiv.

Now that Hostomel Airport has fallen to Russian forces, it’s unclear what will become of Ukraine’s “Dream,” the An-225 Mriya. It’s possible Ukrainian forces will take it back, but any more fighting only invites a greater risk of damaging or even destroying the famous flying giant. We will be continuing our rolling coverage of the conflict in Ukraine as it develops and will update this story as more information about Mriya’s fate surfaces.

The Ministry of Defence of Ukraine now says that fighting continues at Hostomel airport, and that Ukrainian forces have prevented additional Russian troops from landing. It isn’t clear what the current situation is, but it appears the airport is once again contested.