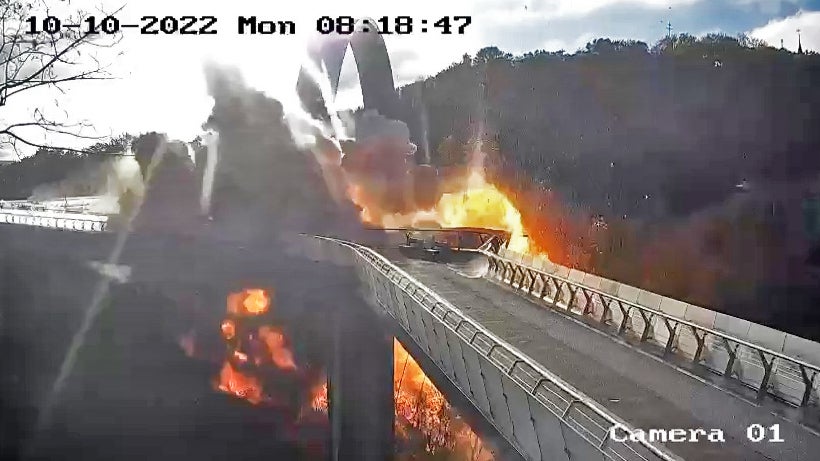 The Ukrainian capital, Kyiv, and other cities have come under attack from Russian long-range missile barrages early this morning. Initial reports indicate that there were at least 12 missiles that hit Kyiv alone, in what bears the hallmarks of a ‘vengeance’ strike in response to the attack on Russia’s Kerch Strait Bridge on Saturday morning, an incident you can read all about here and here.

A casualty toll for the attacks on the capital has not yet been made available, but a spokesperson for the Emergency Service in Kyiv told AP that people have been killed and wounded. Most of the targets in Kyiv, at least, appear to have been of a civilian nature, including the popular pedestrian bridge seen in the security camera image at the top of this story.

As well as targeting Kyiv, there are reports that other missiles detonated in Lviv, in the port city of Mykolaiv, in the center of Dnipro, as well as in Zaporizhzhia, which has now been under attack for three successive nights. In Dnipro, Associated Press journalists said they saw multiple bodies at an industrial site on the city’s outskirts. Ukrainian media reported further explosions in Ternopil, Khmelnytskyi, Zhytomyr, and Kropyvnytskyi.

A reported airstrike on Lviv has left some parts of that western city without electricity or hot water, according to local mayor Andriy Sadovyi. In a statement on Telegram, he said that “standby power generators at several pumping stations were started to restore the water supply” and that “a third of the traffic lights do not work.” Similar issues with water and electricity supplies have been reported by the regional governor of the northeastern Sumy region, Dmytro Zhyvytskyi.

Video from Kyiv shows significant damage, including wrecked cars, windows destroyed by the blast, and fires in the street. The mayor of Kyiv, Vitali Klitschko, said that some of the missiles detonated in the Shevchenko district, in central Kyiv, which includes the historic old town and government offices. The Kyiv National University in central Kyiv was also the scene of an explosion, according to Lesia Vasylenko, a member of Ukraine’s parliament. Other photos and videos indicate that a park and a children’s playground were among the areas that were hit.

Overall, the attack on Kyiv appears to differ from previous raids on the city in that it was apparently directed at the center of the capital. That would seem to support the idea of this being intended as a direct response to the attack on Kerch Strait Bridge on Saturday. Soon after that incident, Russian Senator Alexander Bashkin told RIA Novosti that “There is no doubt that the Russian Federation will give an adequate, conscious and, possibly, asymmetric response to the emergency on the Crimean bridge.”

Russian President Vladimir Putin has described the attack on the Kerch Strait Bridge as a terrorist act carried out by Ukrainian special services. The Russian leader also said the bridge attack was “directed at the destruction of critically important civilian infrastructure.”

Different reports state that Kalibr cruise missiles (which can be fired from ground launchers, as well as warships and submarines) or air-launched cruise missiles were used in the latest attacks on Kyiv, at least. In previous such raids, a combination of these cruise missiles was been deployed. There have also been unconfirmed reports of an increase in Russian bomber activity, including missiles purportedly fired from the Caspian Sea. This, too, fits in with previous strikes by Russian Long-Range Aviation, which you can read about in detail here.

According to a statement from the Ukrainian Armed Forces, local air defenses managed to intercept and shoot down 41 out of 75 missiles launched by Russia. This cannot be independently verified and it seems that missile (and possible drone) attacks also continued after this assessment. Once again, however, today’s events point to the requirement to update and expand Ukrainian air defenses, with new ground-based air defense systems and fighter jets, both topics we have explored in the past.

Writing this morning on Telegram, the governor of Kyiv, Oleksiy Kuleba, provided an update indicating that the raids were still underway:

“The air attack continues. I ask everyone to remain calm and stay in shelters. Air defense works in the region. There is information about downed objects. I emphasize that the air alert is still ongoing. Don’t ignore it and stay in cover. Do not photograph or film landing sites or damaged infrastructure. People’s lives depend on it. Let’s hold on.”

“They are trying to destroy us and wipe us off the face of the earth,” said Ukraine’s President Volodymyr Zelensky in a post on Telegram. “Destroy our people who are sleeping at home in Zaporizhzhia. Kill people who go to work in Dnipro and Kyiv. The air alarm does not subside throughout Ukraine. There are missiles hitting. Unfortunately, there are dead and wounded. Please do not leave shelters. Take care of yourself and your loved ones. Let’s hold on and be strong.”

Condemnation has also come from the United States, with the U.S. ambassador to Ukraine, Bridget A Brink, accusing Russia of escalating “its barrage of attacks on Ukrainian civilians.”

The Russian strikes this morning come just ahead of a planned meeting between Russian President Vladimir Putin and his security council, in which the attack on the Kerch Strait Bridge is expected to be a key talking point.

We will continue to update this story as more information comes available.

More details are now pouring in about the attacks including that at least 75 missiles and long-range Iranian suicide drones hit targets around Ukraine, and the onslaught may still be ongoing. Energy facilities and areas with high concentrations of civilians were primarily hit. Electricity generating stations in multiple cities — Kyiv, Kharkiv, Lviv, etc. — were all struck. Ukraine’s official government Twitter account is asking for advanced air defenses while the country’s military has stated “We are coming after you” to Russia.

Multiple reports state that some of the attacks were prosecuted by suicide drones emanating from Belarus, but it isn’t clear what that conclusion is based on. These long-range drones can fly indirect routes to help sneak into their target area. Still, it is possible some were launched from there.

Lviv, in Ukraine’s far west, also had its thermal powerplant hit and Kharkiv apparently had its energy infrastructure targeted, too. Damage to these facilities can take time to repair and in some cases, a very long time. As such, we really don’t know the long-term impact of these attacks at this time, but if severe damage was done, it could be a problem especially going into the frigid winter months.

Some of the Kalibr cruise missiles launched from the sea crossed over Moldova apparently. These weapons were likely aimed at Lviv.

It looks like the Russian client state and Ukraine’s neighbor to the north, Belarus, is going to officially join the war. This could have significant repercussions especially if their force contributions are sizeable. This includes the possibility of opening up a new northern front to draw Ukrainian soldiers away from the east and the south.