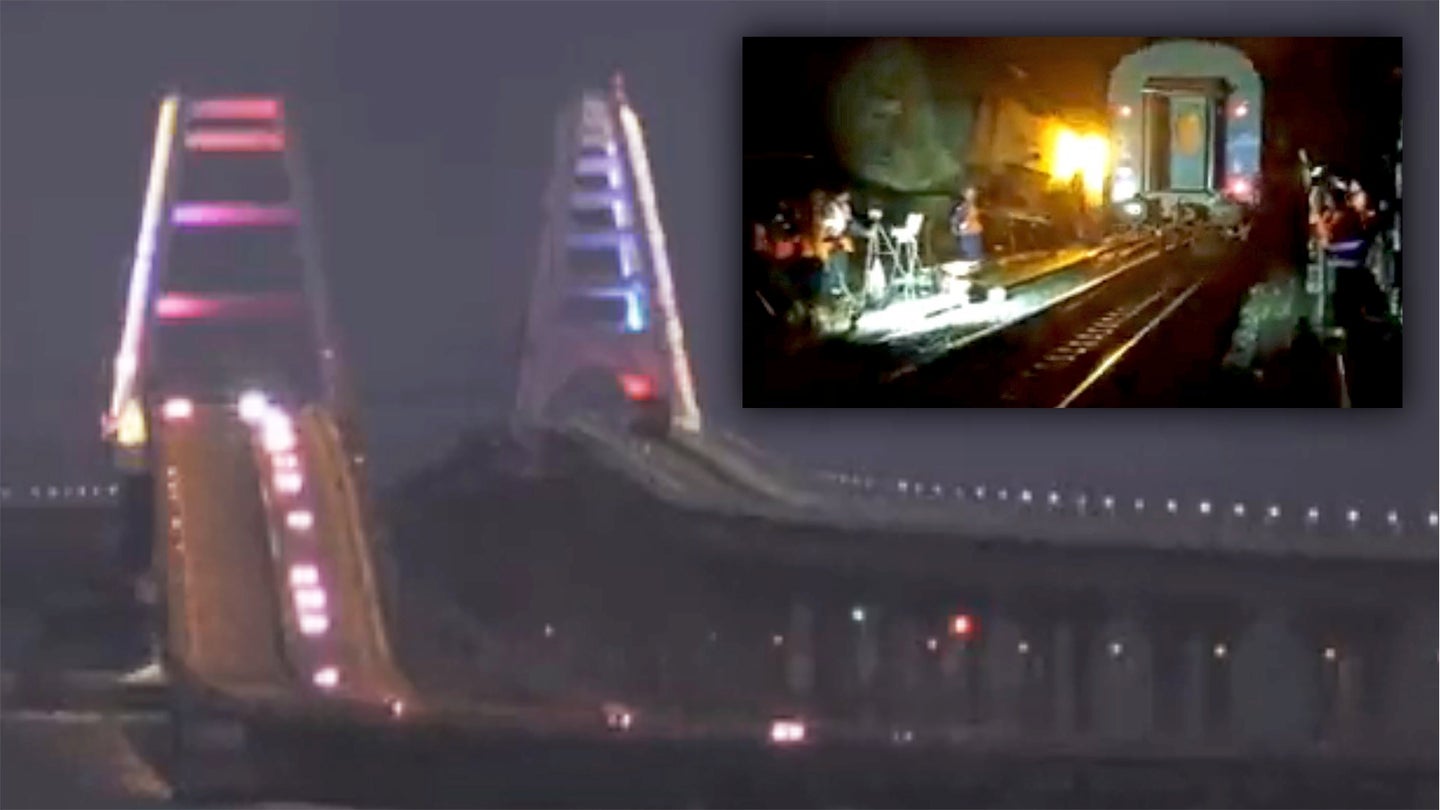 Daylight came after a massive explosion that Russia says was caused by a truck bomb and killed three people, revealing damage to the Kerch Strait Bridge in greater detail, with on-scene images and satellite photos showing the collapsed roadway span. Close-up assessments on the remaining roadway show it has partially buckled, but still standing and very limited traffic has resumed on both the rail and roadway spans of the bridge.

You can read our previous rolling coverage of the incident as it developed here to get caught up.

Despite the serious damage to the remaining span, Russian media reports limited vehicle traffic on one of the roadway spans has resumed and video evidence seems to support this claim. But this traffic seems extremely low in volume and only cars and smaller vehicles appear to be able to use the bridge at this time.

State-owned news agency RIA Novosti, citing Russian Deputy Prime Minister Marat Khusnullin, reported railway traffic was “fully restored” and authorities plan to allow 100 passenger cars to cross the damaged span of the bridge at a time. This is not an entirely true statement. The damage to the railroad section of the bridge looks quite severe and some of the cars that were burning are still on the tracks there. So, Russia clearly thinks the bridge’s other set of parallel tracks can support trains of a certain size, but rail travel across the bridge it is anything but “fully restored.” It likely comes down to how much risk Russia is willing to take using the rail bridge and if it is really safely usable at all without the need for major repairs.

Trucks and buses, and individual passengers, however, are reportedly relegated to three ferries in the Kerch Strait until a further determination can be made in 24 hours.

Even with the bridge at significantly reduced capacity, the incident is a massive win for Ukraine and will only increase Russia’s logistical struggles significantly at a most inopportune time for its invasion campaign.

Marine traffic was also halted in the aftermath of the explosion causing quite the traffic jam in its own right.

The risk of attack on vital infrastructure like the bridge may have prompted increased Russian naval activity near the Black Sea Fleet base in Sevastopol, as seen on satellite imagery.

In response to Saturday’s events, Pentagon spokesperson Air Force Brig. Gen. Pat Ryder said, “We’re aware of the press reports, but have nothing to provide at this time.”

The mixed messaging from Ukraine and an apparent scramble by Russia to address the strike on its Crimean lifeline only raise more questions than answers.

Ukrainian officials have been either silent or coyly hinting about their involvement, similar to previous high-profile incidents with Russian forces in occupied Crimea, with President Zelensky alluding to the attack in an address:

Some Ukrainian media outlets are reporting that Ukraine’s SBU security service carried out the attack, citing unnamed sources. But there has been no official comment by SBU.

At the same time, some Ukrainian sources have made unsubstantiated claims that Russia carried out the attack as part of an ongoing and deteriorating power struggle between FSB and the Ministry of Defense. Miykhailo Podolyak, adviser to Ukrainian President Volodymyr Zelensky, suggested the blast was part of a larger plot amid broader, uncorroborated claims of a coup in Moscow by Ukrainian accounts.

Grey Zone, a Telegram channel affiliated with the Russian paramilitary organization Wagner Group, posted Saturday evening that both Russian Minister of Defense Gen. Sergei Shoigu and Chief of the General Staff Gen. Valery Gerasimov had resigned after the explosion. The War Zone is presently unable to confirm these reports.

For information warfare purposes, it makes perfect sense for Ukraine to capitalize on what has become a recognizable split in Russia. In its October 8 intelligence update, the British Ministry of Defense noted continued criticism from the pro-war faction, led by Chechen leader Ramzan Kadyrov and Wagner Group owner Yevgeny Prigozhin, against Russian military high command.

We will continue to update this post as more information comes available.