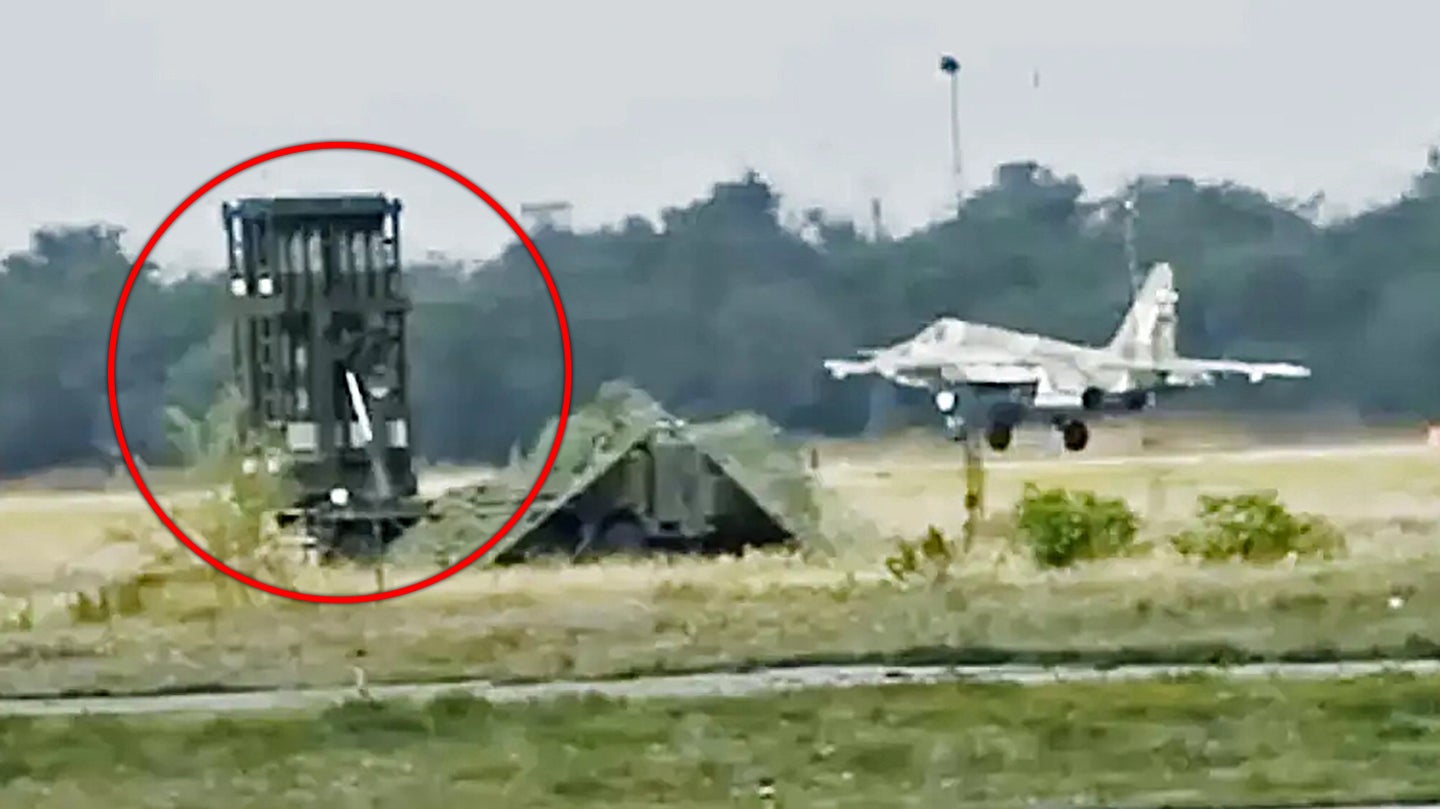 Russia’s much-vaunted new S-350 Vityaz ground-based air defense system has made what seems to be its first appearance in the war in Ukraine, with evidence of deployment at an airbase less than 40 miles from the Ukrainian border. Introducing this medium-range surface-to-air missile (SAM) system to this particular facility is interesting, suggesting broader Russian concerns that Ukraine is increasingly in a position to attack bases beyond its borders. This would make some sense following the high-profile attack on Russia’s Saki Air Base in southern Crimea, as well as previous clandestine operations.

Elements of an S-350 system can be seen in a recently released official Russian Ministry of Defense video depicting operations by Su-25 Frogfoot close air support aircraft at an unnamed airbase involved in the Ukrainian war. The video was published to accompany reports that Russian Su-25s had “eliminated military facilities and equipment” belonging to Ukraine on August 12.

While it’s highly unusual to see official imagery that includes the individual codes of Russian military aircraft, it’s the appearance of the S-350 components that’s most interesting. These have been identified by defense analyst Guy Plopsky, who tweets as @GuyPlopsky, as a 50N6A fire-control radar, 96L6-TsP acquisition radar, as well as two missile launchers, which could be examples of the 50P6 transporter-erector-launcher (TELs) and/or the very similar 50P6T launcher/loader vehicle.

The location of the video is almost certainly Taganrog Air Base, near the port city of the same name in Rostov Oblast, on the Sea of Azov. The base, also known as Taganrog Tsentralnyi, is normally home to the roughly 20 Il-76MD Candid transport aircraft of the 708th Military Transport Aviation Regiment.

Since the invasion of Ukraine began in February, Taganrog has become an important forward airbase for Russian Aerospace Forces helicopters, but Su-25s had not previously been noted here. The installation should not be confused with another airfield in Taganrog, which is used by the Beriev company, including for its work on airborne early warning aircraft.

While there have been ground-based air defense components at Taganrog Tsentralnyi for some time, the presence of launchers for the S-350 appears to be fairly new. The video clearly shows one of these in the upright position, ready to fire.

The latest imagery from Google Earth, dated February 2022, does not show the S-350 launchers there, or at least not alongside the runway where one of them can be seen in the video.

The War Zone spoke to Stefan Büttner, an expert in Russian airbase infrastructure, for their analysis of the apparently newly positioned SAM launchers. He confirmed that satellite imagery from Sentinel Hub on August 1, “clearly shows tracks leading to one of the launchers for the first time. The position can be determined by the video and matches the tracks on Sentinel Hub.”

In fact, there are vehicle tracks visible in the area where the S-350 can now be seen from mid-July, alongside the runway, although no signs of the actual launcher. It is possible that it changed location around this time.

According to Büttner’s analysis, the S-350 could actually have been at the base as early as mid-April, based on evidence he has seen of vehicle movements.

As to the wider developments at Taganrog Tsentralnyi, Büttner added: “This is the first footage from Taganrog [from the war in Ukraine]. I haven’t noticed Taganrog being used as a base for combat jets before. In February there were six Ka-52s there, but that must have had something to do with the invasion. These Su-25s are interesting because they come from three different regiments. Until now, Su-25s from only two different regiments could be seen on one airfield. Currently, in Taganrog, there are Su-25s from the 18th and 368th Regiments, and also probably from 266th Regiment.”

In terms of overall aircraft numbers, however, there doesn’t appear to be more than one squadron’s worth of Su-25s at the base. Büttner’s conclusion is that the “Russians are running out of planes.”

As regards the deployment of air defense systems at Taganrog Tsentralnyi, this could be related to the requirement for reinforced air defenses over southern and eastern Ukraine, where the most intense fighting is currently taking place and where Ukrainian Air Force aircraft are known to operate, although it’s not clear how close to the Russian border they fly.

The exact missile types available to the S-350 are also currently subject to some debate, although options are based around the 9M96 that can also be used by the long-range S-400 air defense system

The basic 9M96 has a range of only around 18 miles, while the extended-range 9M96D can reach targets at 75 miles, with unconfirmed reports suggesting it could perhaps have a range as far as 90 miles.

Each of the 50P6 series launchers can carry 12 of the 9M96 series missiles. Shorter-range 9M100 missiles are also planned to be integrated, these being intended for point defense out to a range of around 6-9 miles. Expected to be carried in much larger numbers on each launch vehicle, it is unclear if these have actually been fielded yet.

Even provided the longer-range 9M96D is available, the S-350’s reach would not extend that far beyond the border and into the far southeast corner of Ukraine’s territory.

With that in mind, it would seem the positioning of the S-350 at Taganrog Tsentralnyi is intended primarily to provide defense against a possible Ukrainian attack directed against the base itself, rather than in an effort to extend the Russian air defense umbrella to the west.

The S-350, which reportedly began serial production in March 2019, and entered service in February 2020, is designed to tackle aircraft, UAVs, and cruise missiles, as well as ballistic missile targets. In the Taganrog Tsentralnyi scenario, long-range drones and perhaps ballistic missiles are likely the primary threat to the airbase itself. However, the area defense capabilities of the S-350 would allow offer protection to other critical infrastructures or targets in the vicinity of the base.

Ultimately, the S-350 was planned as a successor to the Cold War-era S-300P series system, an aging weapon that has been employed by Ukraine and by Russia in the current conflict.

Unlike the basic S-300PS, and the Pantsir that’s previously been used for the defense of Russian airbases, in particular, the S-350 has the advantage of firing missiles optimized for long/medium-range engagements as well as for point defense. This is ideal for protecting critical infrastructure, which could come under attack from a variety of threats, and potentially from a range of different weapons simultaneously. Reportedly, the S-350 can detect and track up to 40 targets simultaneously while engaging eight of them with two missiles per target.

That Russian-operated airbases in proximity to Ukraine are under threat of attack is hardly a secret.

Last week, we were first to report on satellite imagery showing a huge new scorch mark on the runway at Ziabrovka Airbase, just 14 miles north of the Ukrainian border, in Belarus. What caused this damage remains a mystery, but the airfield has been used in recent months by Russian helicopters and ground forces, which apparently operated from here immediately ahead of the all-out invasion of Ukraine.

Just a day earlier, on August 9, Russia’s Saki Air Base on the occupied Crimean peninsula was rocked by large explosions that the Russian Ministry of Defense claimed were the result of “several aviation munitions destroyed.” There is still much uncertainty about what happened at Saki, although Russian naval aircraft look to have been specifically targeted, with at least 10 jets seen seriously damaged or destroyed.

Even Taganrog itself may have come under attack previously. On March 1, unconfirmed reports emerged suggesting that Ukrainian forces may have hit the base, based on videos and photos that appeared to show an Il-76 transport burning on the ground there.

And, at the very start of the conflict, on February 24, unconfirmed reports emerged that Ukraine had launched some kind of strike against Russia’s Millerovo Air Base, less than 20 miles from the Ukrainian border.

What these incidents have in common, other than targeting Russian airbases, is the fact that the methods used to attack them remain unknown. If indeed, they were all attacks prosecuted by the Ukrainian side, which also remains unclear. Accidental fires, explosions, and other kinds of non-combat-related mishaps are hardly unknown at Russian military installations.

What’s clear is that the S-350 would appear to offer a means of defense against some of the many possible vectors that could have been used to prosecute these attacks. It is also now protecting an airbase that’s part of Russia’s critical ability to generate ground-attack sorties over the battlefield.

With the Pantsir’s well-publicized limitations, it may be the case that Russia has chosen to deploy a newer and more capable ground-based air defense system to protect some of its more important infrastructures in the context of the Ukrainian war.

The War Zone spoke to Dmitry Stefanovich, a Research Fellow at the Center for International Security, IMEMO RAS, who stated that he expected to see the S-350 deployed for use in the Ukrainian war sooner.

“Their main asset is the increased number of relatively simpler missiles per launcher, which makes it a good tool against salvo strikes of adversary precision weapons, including cruise missiles, UAVs, and guided MLRS rounds, as well as ballistic missiles,” he explained. “In the case of ongoing warfighting we’ve seen some cases of overloading of the Russian air and missile defenses, and S-350 (as well as putting an increased load-out of 9M96 on S-400 launchers) looks like a natural solution. However, there are too few S-350s available due to their somewhat delayed entry into service. Probably the priorities will be shifted now, but in any case, the S-350 has its role in countering adversary precision weapons under any scenario.”

It’s still possible that the S-350’s appearance at Taganrog Tsentralnyi will remain a one-off, for the time being, perhaps related to some kind of combat trials. On the other hand, it will be interesting to see whether we begin seeing S-350s deployed at other airbases being used by Russia in the current conflict. Depending on how the air war progresses, there’s also the possibility that we may start to see the S-350s inside Ukraine, as well, in an effort to further extend Russian air defense coverage.

The post Russia’s New S-350 Air Defense System Appears At Base Near Ukraine Border appeared first on The Drive.