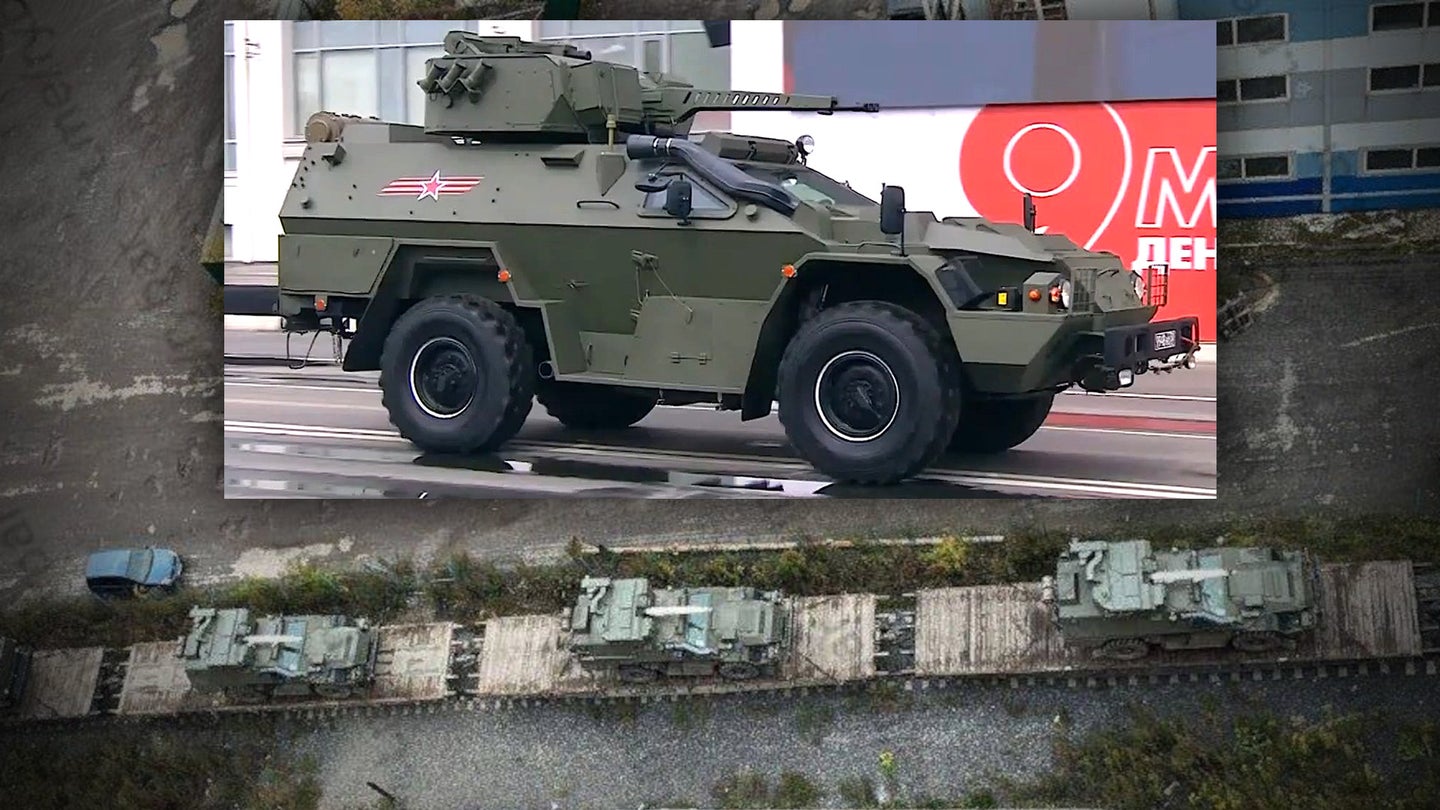 Imagery has emerged on social media recently that shows one or more Russian trains carrying a number of rare 4×4 BPM-97 Vystrel light armored vehicles fitted with turrets armed with 30mm cannons. The movement of the BPM-97s has garnered unique interest as they may be associated with the Russian military’s 12th Main Directorate, which oversees the country’s nuclear arsenal. These observations come amid growing threats from Russian President Vladimir Putin and other officials in Russia about the potential use of nuclear weapons as Ukrainian forces continue regaining territory. As such, they seem to have led to some startling headlines that seem unsubstantiated. The fact is that while such a deployment could very well point to a more ominous nuclear operation in the works, there are many other reasons, some of them glaring, for such a movement, in addition to just normal training operations.

A video and a picture of what may be the same train carrying the BPM-97s, as well as other trucks, first appeared online yesterday, but it’s not immediately clear where or when it was taken. Geolocation of the video by open-source intelligence enthusiasts appears to show that it was taken in Sergiyev Posad, a Russian city northeast of Moscow, and that the train itself was moving in a southwesterly direction. Though we cannot say with absolute certainty that the still picture is of the same train as is seen in the video, it seems very possible as the same types of vehicles are visible in both.

The initial variant of the BPM-97, also known as the KAMAZ-43269, was developed in the 1990s for Border Guard units assigned to Russia’s Federal Security Service, better known as the FSB. Versions have since entered service with Russia’s internal security-focused and special operations forces-heavy Rosgvardia, or National Guard, as well as the country’s Federal Penitentiary Service, the Ministry of Emergency Situations, and the Ministry of Defense.

Russian military BPM-97s fitted with the remotely BM-30D turret, which features a co-axial 7.62x51mm PKTM machine gun and top-mounted 30mm AGS-30 automatic grenade launcher in addition to the 30mm 2A42 automatic cannon, were first seen publicly at a parade in 2021. The BMD-30D gives the vehicle an additional boost in firepower that its crew can employ without having to expose themselves to hostile fire They are still relatively lightly armored, though. This particular variant remains relatively rare, and not clear how many have been fielded and to what units.

In the Russian military, BPM-97s, in general, are almost exclusively associated with so-called “counter-sabotage” security contingents within the 12th Main Directorate, which is responsible for maintaining, sustaining, guarding, and otherwise overseeing elements of the country’s nuclear arsenal. Units from this directorate, also known by its Russian acronym 12th GUMO, would be tasked with escorting nuclear weapons to operational units if called upon.

There is no clear indication from the video or picture what unit or units these vehicles belong to, but 12th GUMO certainly has a presence in Sergiyev Posad that includes security units that could be equipped with BPM-97s. It is equally unclear what their final destination might be if the imagery is indeed recent.

There are already numerous unconfirmed reports suggesting that the movement of these vehicles could be linked to a forthcoming demonstration of some kind of Russia’s willingness to use nuclear weapons in or around Ukraine. Russian nuclear saber-rattling definitely has increased as Ukrainian forces have been steady progress in liberating occupied areas in the eastern and southern ends of the country over the past two months or so. At the same time, whether or not a nuclear detonation of some kind is at all imminent remains a hot topic of debate.

The Russian government might seek to use either routine or snap nuclear readiness exercises, which often involve the live-firing of strategic weapon systems without nuclear warheads, to send a strategic signal to Ukraine and its allies and partners, and the train-load of BPM-97s could be related to all of this. The annual Grom large-scale nuclear readiness drills typically take place around this time of year. Russian state media reports suggesting that this year’s Grom exercise would be held in the spring appear to have been incorrect, though a smaller scale nuclear drill was shortly before the all-out invasion of Ukraine.

Separate reports today said that Russia’s huge special missions submarine Belgorod, understood to be capable of firing nuclear-armed and nuclear-powered Poseidon ‘doomsday torpedos,’ appears to have put to sea. Video also surfaced recently on social media showing transporter-erector-launchers for the Iskander-M short-range ballistic missile, which can carry nuclear or conventional warheads, along with associated reloading vehicles, being moved by train, though it’s unclear when or where that footage was shot.

At the same time, there are no clear indications that the appearance of the BPM-97s in transit, or any of these other potentially nuclear weapon-related developments, are directly related to a broader coordinated movement of Russian strategic forces due to the ongoing war in Ukraine or the tensions with the West as a result of it.

It is very possible that the train carrying the BPM-97s could be entirely unrelated to strategic nuclear developments of any kind. It is no secret that the Russian military has been scrambling to find fresh units to commit to the fight in Ukraine, as well as additional armored vehicles, to make up for significant losses over the past seven months or so. In addition, Russia’s armed forces have already deployed a number of rare armored vehicles, including some of its small fleet of BMPT Terminator armored fighting vehicles and the one-off prototype T-80UM2 tank, to the Ukrainian battlefield. BM-30D-equipped BPM-97s would certainly offer at least some amount of additional highly mobile firepower for Russian forces trying to hold back Ukraine’s advances.

Though it might seem hard to believe on the face of it that Russia would poach vehicles and personnel from nuclear security units to fight in Ukraine, evidence has already emerged that members of units from the Russian Strategic Rocket Forces, or RVSN, have been sent to the front as individual replacements. The RVSN, also sometimes referred to as Russia’s Strategic Missiles Forces, is responsible for operating, maintaining, and otherwise supporting the country’s arsenal of nuclear-armed land-based intercontinental ballistic missiles (ICBM).

Though the ability of these nuclear security contingents to carry out general combat operations is perhaps debatable, they are certainly understood to be relatively well funded and have higher-end equipment. They would have to be more capable than the almost completely untrained conscripts who have reportedly been arriving at the front lines following Putin’s recent announcement of a partial mobilization. There are questions about what the available pool of potential draftees might look like at its most basic level with reports that tens of thousands of Russians may have now fled the country, or are trying to, in order to avoid serving in Ukraine.

12th GUMO “counter sabotage” forces could be deployed to guard fixed positions in Ukraine or neighboring areas of Russia to help free up other more conventional units, too.

This all assumes that the BPM-97s spotted on the train are indeed from a unit assigned to the 12th GUMO, as well. As already noted, various BPM-97 variants are in service with other Russian security forces and it’s possible that one or more of these entities has received BM-30D-equipped vehicles.

It very much remains to be seen whether or not any BM-30D-equipped BPM-97s will appear soon in or around Ukraine, or as part of any nuclear readiness drills that may be coming. It is equally uncertain whether Russia’s nuclear threats will actually translate into action of any kind.

This is not to say that indications of possible movements of Russia’s nuclear forces are not worth keeping an eye out for, but the reasons for a train to be spotted carrying 30mm cannon-armed BPM-97s and other vehicles could very well be much more mundane.

The post Russia’s “Nuclear Train” Is Not Necessarily What The Media Is Portraying It To Be appeared first on The Drive.