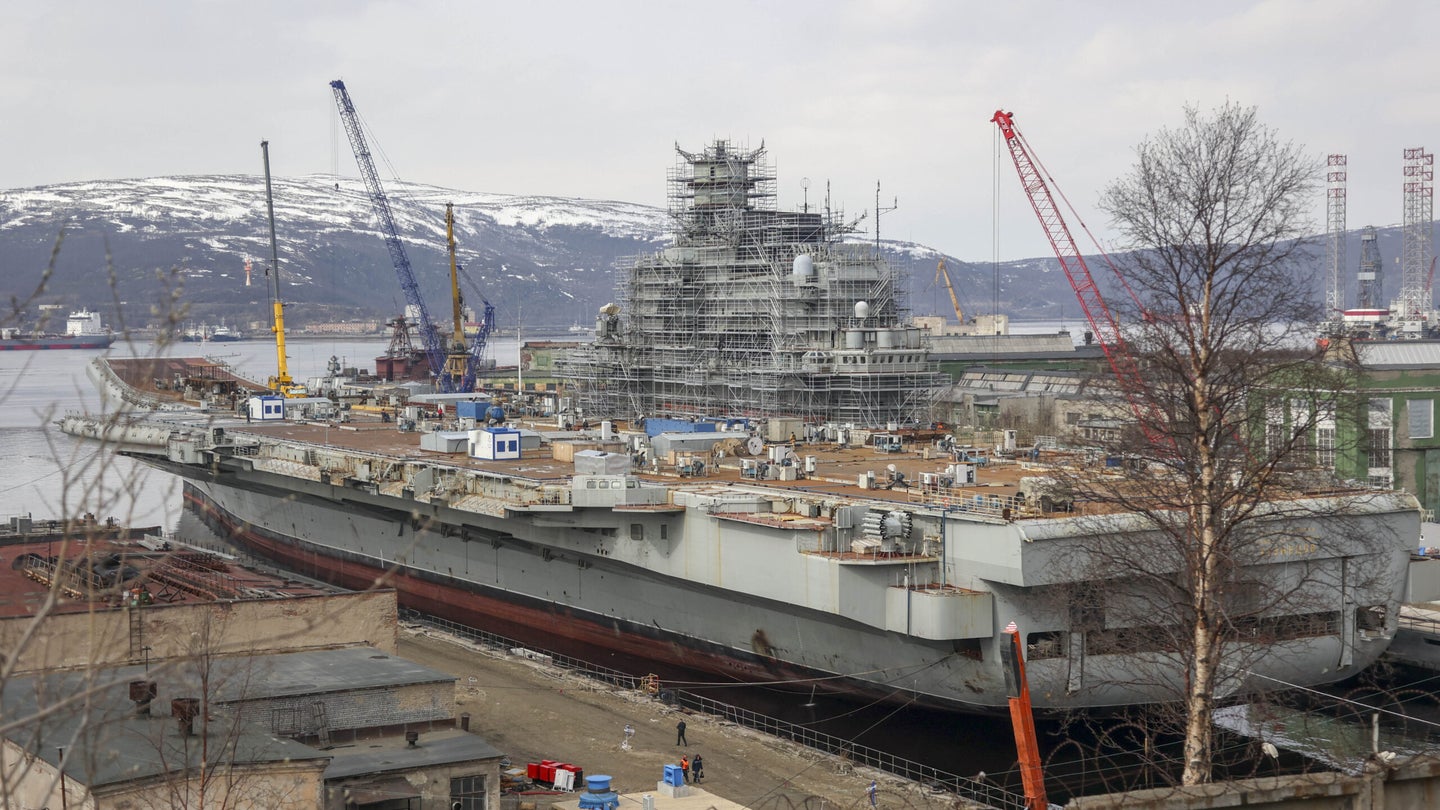 A fire broke out today onboard the Russian Navy’s sole aircraft carrier, Admiral Kuznetsov, which has been undergoing a major overhaul in the country’s northwestern Murmansk region for more than four years, and which was just moved into a new and improvised drydock earlier this year. This is not the first incident of its kind on the flattop in the course of this work, with another blaze having broken out on the ship in 2019. The vessel had also suffered another fire while anchored off Turkey in 2009, which led to the death of a member of the crew.

Since its overhaul began in 2017, a litany of other issues has befallen the carrier. Most dramatically, a huge floating drydock suddenly sank underneath the ship in 2018. Its history before then was hardly better, with the ship being so prone to breakdowns that an ocean-going tug was always assigned to accompany it during deployments.

Today, Andrey Miroshnikov, the head of the press service of JSC Zvyozdochka, a shipyard responsible for refitting and repairing Russian naval vessels, confirmed the presence of “local smoke” on the carrier.

“On December 22, in one of the premises of the TAVKR Admiral of the Fleet of the Soviet Union Kuznetsov local smoke occurred,” the statement explained. “It was promptly eliminated by the emergency party of the ship and employees of special services. No damage was done to the ship. There were no casualties as a result of the incident. The reasons for the incident will be established as a result of the audit.”

TAVKR, in this context, is the Russian abbreviation for ‘heavy aircraft-carrying cruiser,’ as the aircraft carrier is officially categorized by Russia’s Navy. The ship’s full formal name is Admiral of the Fleet of the Soviet Union Kuznetsov.

A somewhat different account was provided by Alexei Rakhmanov, the head of the United Shipbuilding Corporation (USC), to the state-run RIA Novosti agency. Rakhmanov admitted that there was a “small fire,” which broke out during repair work. “The fire was extinguished,” he added. “All the relevant fire systems worked properly.” Rakhmanov also said there had been no damage or casualties, although the former claim seems unlikely, with at least some degree of damage seeming probable.

An emergency services source told Russia’s state-run TASS news agency that 20 people had to be evacuated.

These confirmations followed a flurry of unconfirmed reports from social media accounts in the Murmansk region this morning. These claims included suggestions that the fire covered an area of around 65 square feet.

A photo that purports to show the aircraft carrier during, or soon after, the fire is inconclusive as to the location and intensity of the blaze, although several emergency vehicles are clearly seen on the harbor-side. It is noteworthy, however, that the superstructure of the vessel remains almost entirely covered in scaffolding, similar to how it appeared this summer, suggesting that considerable work still requires completion, at least in this area.

It’s worth noting, too, that various social media accounts today have been sharing a photo showing smoke billowing over the deck of Admiral Kuznetsov in the context of the latest fire, but which is actually from the incident in December 2019.

However, fires, in general, are far from uncommon among Russian naval vessels while in shipyards and at sea. Multiple incidents have occurred in recent years, the most devastating affecting the nuclear mini-submarine Losharik, which experienced an internal blaze during an apparent training exercise in 2019 that killed 14 sailors onboard.

When it comes to Admiral Kuznetsov, TASS had reported today, citing two defense industry sources, that the carrier was beginning to leave its improvised drydock two days ago — a process expected to take a full month. It’s unclear what, if any, work had been done to achieve this, but the vessel does not seem to have moved at all from its drydock so far. Getting the vessel out of drydock will not be straightforward: the construction project literally walled the ship in, with no access gate built in.

Once back in the water, the refurbishment work on the carrier was planned to continue until the first quarter of 2024, based on the latest reported estimate, which has slipped due to reported problems discovered in the repair work. It’s not known how, if at all the latest fire might affect that schedule. Once back in operational service, it’s then expected that Admiral Kuznetsov will serve for another 10-15 years.

So far, it’s safe to say, the effort to refit Admiral Kuznetsov after its service in Russia’s Syrian campaign ended in early 2017 has been anything but auspicious, even though the actual scope of the project was reduced very early on, to save money.

Most dramatically, the floating dry dock, known as PD-50, one of the world’s largest of its kind, sank while the carrier was aboard, in October 2018. The dry dock was located at the 82nd Repair Shipyard in the village of Roslyakovo, also in the Murmansk region. Up to that point, there had been reports that the carrier might return to the fleet as early as 2021.

During the loss of PD-50, cranes crashed down onto the carrier’s deck and the incident left several victims hospitalized. It also affected repair work on other large-size Northern Fleet vessels, including its biggest submarines.

Roughly a year after the floating dry dock sank, a fire broke out onboard the carrier, as its refit continued, albeit at a reduced level, without a dry dock actually large enough to service the ship. Different reports out of Russia suggest that one person was killed, 10 people were injured, and two were left missing in that previous blaze.

It was only in May of this year that reports emerged that Kuznetsov had been transferred into a newly expanded drydock at the 35th Shipyard. The photo at the top of this story shows the carrier on May 20, 2022, as it was about to be towed to the shipyard.

At the time of that transfer to the drydock, it was said the goal was to complete the overhaul no later than September 2022. The new, improvised drydock was created by joining together two smaller drydocks and then also constructing an extended enclosed basin in front of them.

At this stage, we simply don’t know the extent of the damage that occurred during the latest fire earlier today. It’s also the case that Russia has a track record of not admitting the full scope of shipyard accidents, so we may well never find out exactly what happened or how the refit has been affected.

While this aircraft carrier is certainly a unique vessel within the Russian Navy, its actual combat efficiency is questionable, underscored by its lackluster campaign off the coast of Syria. This deployment saw two fighter jets lost just days apart during an abbreviated cruise during which the carrier’s aircraft operated from land bases for at least a portion of it. This seems to have been driven by the need to carry more meaningful weapons and fuel loads than is possible when taking off from the carrier, which lacks catapult launch equipment and relies on a ‘ski jump’ ramp.

The current total expected price tag for the refit, including the cost of repairs necessitated by the 2019 fire or this new one, is unknown. What it has cost to sustain the ship’s air wing without a ship to put it on in the meantime is unclear, as is how expensive it might be to actually operate and maintain the refurbished carrier for another decade at least, if it does actually return to service.

As such, there have now long been questions as to whether it’s even worth refurbishing Admiral Kuznetsov, especially when Russia has plans to build new large-deck amphibious assault ships. More recently, the full-scale invasion of Ukraine and related sanctions placed on Russia have not only seen military priorities shift but have also eaten into defense budgets, and devastated the economy more generally. All in all, hanging on to the Cold War-era carrier now looks like an even worse investment.

However, past experience shows that yet another incident to bedevil the aircraft carrier is unlikely to change Moscow’s policy of retaining Admiral Kuznetsov, although yet another delay or further scaling back of the refurbishment would also not be a surprise.