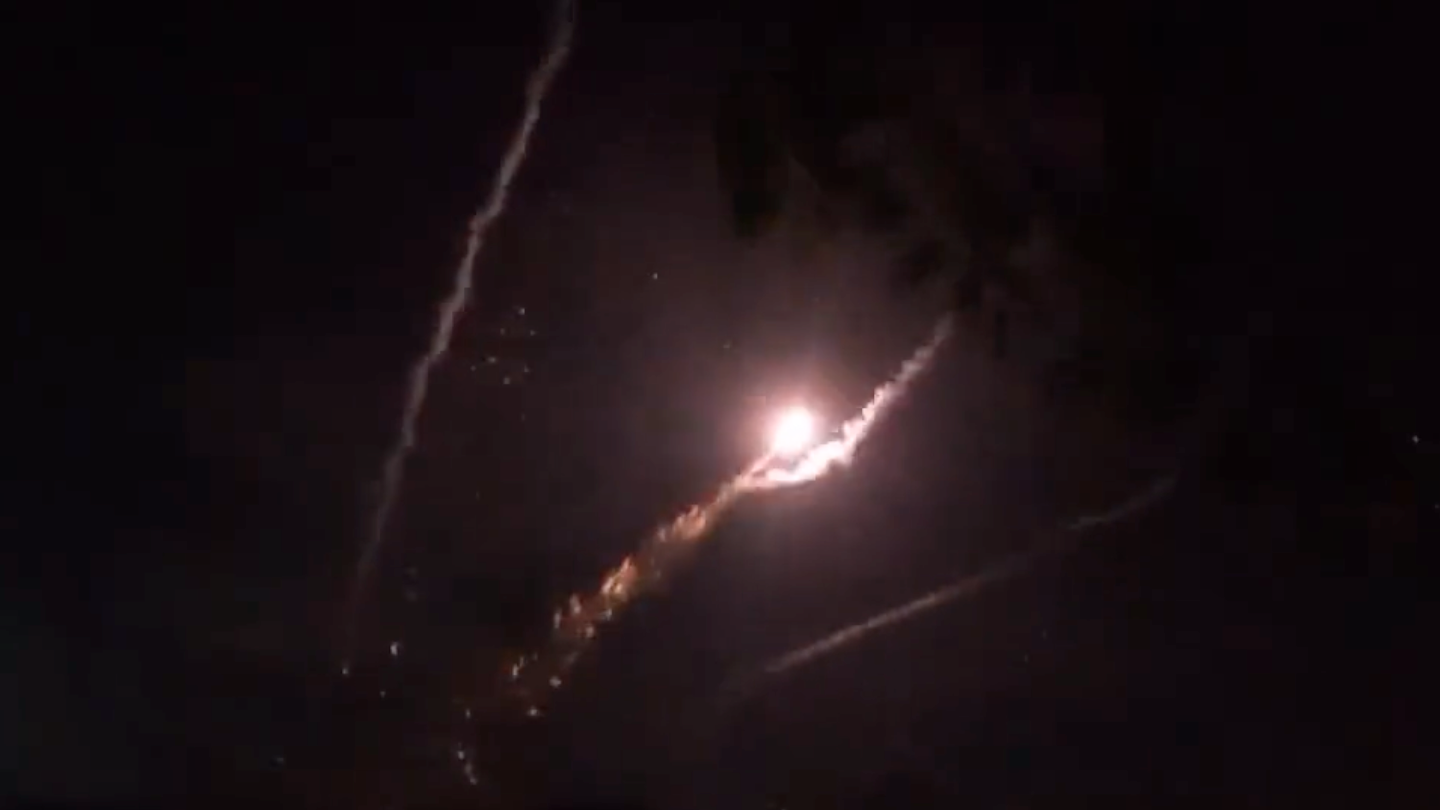 Rockets from Gaza were fired into Israel after an IDF strike killed a senior Palestinian Islamic Jihad leader. Via YouTube

The skies over Israel were lit up Friday night by barrages of rockets fired from Gaza and Israeli’s Tamir interceptors sent up to destroy them by the Iron Dome system.

The air defense duel came in the wake of an Israeli airstrike against Tayseer Jabari, a senior commander of the Palestinian Islamic Jihad (PIJ) in Gaza. Jabari was killed in an operation Israel calls Breaking Dawn. 10 civilians including a five-year-old girl and a 23-year-old woman were among those killed, with another 55 people wounded, the Palestinian Health Ministry told The Associated Press. It did not differentiate between civilians and militants. The Israeli military said its early estimates were that around 15 fighters were killed.

“We just targeted a senior commander of the Palestinian Islamic Jihad terrorist group in Gaza,” the Israeli Defense Force (IDF) announced in a tweet Friday. “Tayseer Jabari was responsible for multiple terrorist attacks against Israeli civilians. The IDF will continue to defend Israel against the threat of terrorism.”

The IDF published a video of what it says was the strike on Jabari.

Israel said it was targeting the Islamic Jihad militant group in response to an “imminent threat” following the arrest of another senior militant in the West Bank earlier this week.

Israeli officials anticipated there would be rocket fire from Gaza as a result of the strike against Jabari. It opened bomb shelters in the south of that country and increased its military presence on the border.

Reportedly, Israeli Defense Minister Benny Gantz has authorized the call up of 25,000 reservists. We reached out to the Israeli Ministry of Defense for more information and will update this story with any response.

The PIJ quickly vowed revenge for the attack on Jabari.

“The enemy has started a war targeting our people and we all need to defend ourselves and our people,” a PIJ statement said.

In the ensuing hours, PIJ claimed to have fired 100 rockets at Israel.

Images quickly began to appear on social media of some of those launches and the Israeli response.

The last major barrage on Israel from Gaza took place in May, 2021, when more than 1050 rockets were fired.

The Al Qassam Brigades, the militant wing of the Palestinian group Hamas, as well as Palestinian Islamic Jihad (PIJ), were the organizations primarily responsible for these attacks, which included the largest rocket barrages aimed at central Israel ever. The rocket fire prompted Israeli retaliatory air and artillery strikes, including a number of targeted killings of senior Palestinian militants. Concerns about a similar spiral of death and destruction are high now.

While the IDF was able to knock down hundreds of those rockets back then, the sheer volume of fire underscored the limitations of employing Iron Dome against continuous mass saturation attacks. It also points to how this reality incentivizes Israel’s opponents to simply expand their arsenals in order to effectively penetrate Iron Dome defenses.

The complete Iron Dome system is heavily automated in many regards.

It has several launch units, each loaded with up to 20 Tamir interceptors, as well as associated radars, to spot and track incoming threats, and a battle management and control unit.

Each highly maneuverable Tamir interceptor has an active radar seeker and a two-way datalink to receive additional targeting information in-flight to improve its accuracy. A proximity fuze triggers the detonation of a ring-shaped high explosive blast fragmentation warhead inside the interceptor when it gets sufficiently close to its target.

You can read more about this arrangement and how it works in this past piece of ours.

Concerns about the ability of the Iron Dome system to be overwhelmed by incoming fire has led Israel to develop the Iron Beam laser air defense system.

In a 103-second video posted online in April, the IDF showcased what it claimed was the system locking on and destroying rockets, mortars and a drone.

The Iron Beam is a trailer-mounted system with a directed energy weapon. The slickly produced video, with a soundtrack, offers only a limited view of the entire system. Previously, Breaking Defense reported that Israel was developing a system firing “an electric 100-150 kW solid-state laser that will be capable of intercepting rockets and missiles.”

The Iron Beam was touted as “the world’s first energy-based weapons system that uses a laser to shoot down incoming UAVs, rockets & mortars at a cost of $3.50 per shot,” according to a Tweet by former Israeli Prime Minister Naftali Bennett back in April. The system is designed to augment, not replace, the Iron Dome.

Initially, Israel was looking to deploy the system in 2024, according to the Times of Israel. But its military pushed to move the timeline up out of concern that Israel’s current layered air defense system would run out of interceptor missiles for its Iron Dome and other systems.

Highlighting the significance of air defense in the Middle East, one of the first things President Joe Biden did upon arriving in Israel last month was to get a glimpse of the Iron Beam laser air defense system.

“I’m going straight to a briefing on Israeli missiles and rocket defense capabilities, including the U.S. support for the Iron Dome and Israel’s new laser-enabled system, called the Iron Beam,” Biden said.

Part of that visit was to pitch his vision of regional air defense cooperation between Israel and Sunni Arab nations like Saudi Arabia, United Arab Emirates, Jordan Egypt, Jordan, Bahrain, Saudi Arabia, and Qatar against ballistic missile and drone threats posed by Iran and its proxies.

But any conflict between Israel and militant groups in Gaza raises concerns about wider conflict because both Hamas and PIJ are heavily backed by Iran.

A U.S. military official tells The War Zone that U.S. Central Command, which now has responsibility for military-to-military relations with Israel, did not get advance warning about the IDF attack that killed Jabari, PIJ fighters and Palestinian civilians.

A senior U.S. defense official tells The War Zone that it has seen no movement by Iran so far in the wake of that attack and ensuing PIJ response.

But it is still early. As we saw in May 2021. And in June 2006 during the even bloodier Israel-Hezbollah conflict that killed about 1,200 Lebanese, mostly civilians, and 160 Israelis – mostly troops fighting Hezbollah inside Lebanon.

We will keep you informed regarding this quickly developing story.

The post Sky Over Israel Lights Up After Killing Of Palestinian Islamic Jihad Leader appeared first on The Drive.