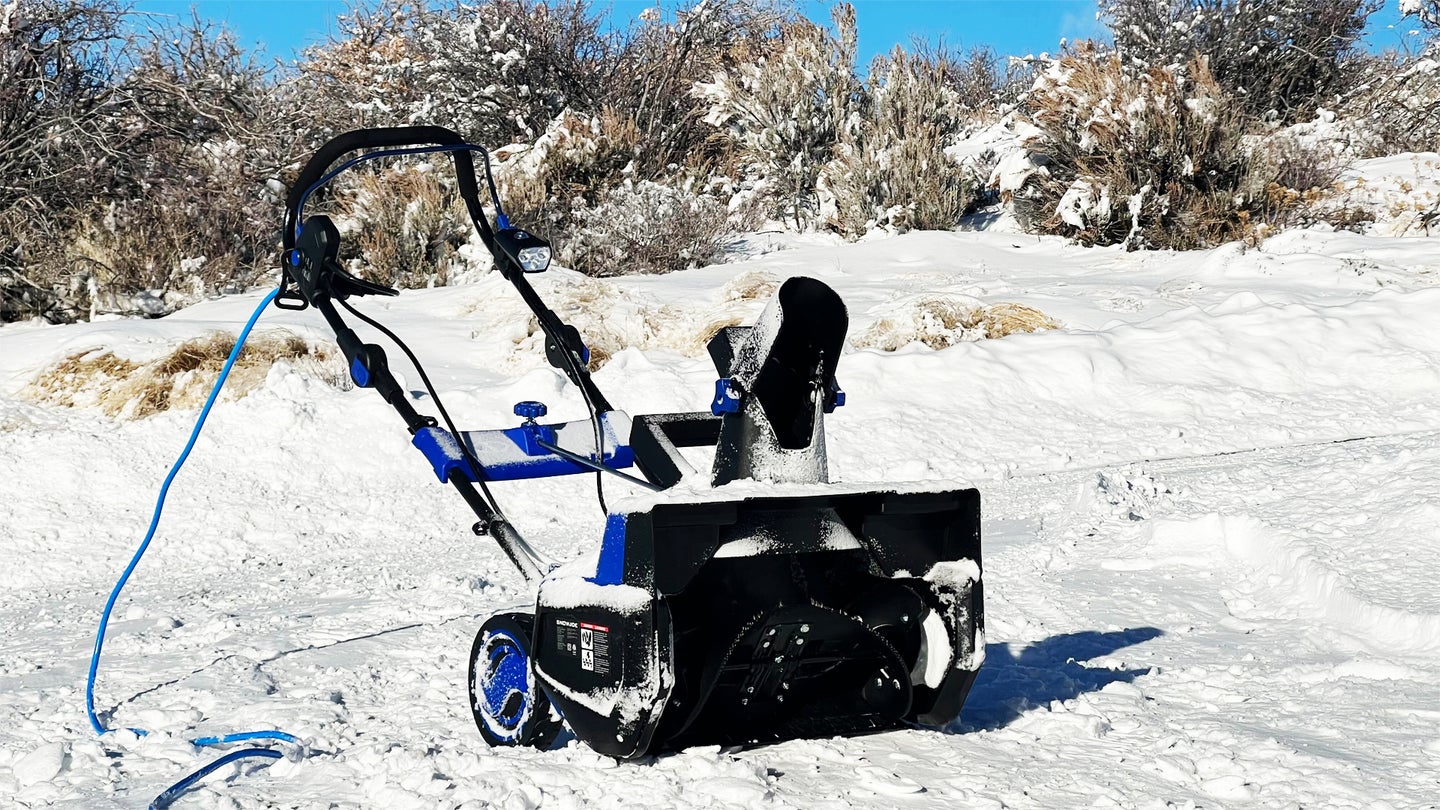 Enjoying snow was one of the reasons I moved to Utah. But once I got here, I realized I still wasn’t ready for the winters here. I was stupidly convinced that I could stay ahead of the snow with a shovel—that thought quickly dissolved the first time four feet fell within 24 hours. I purchased a snow blower that night, still trying to catch my breath.

What I purchased was the first electric snow blower I’ve ever owned: specifically, a Snow Joe. I’d heard good things about the brand and, honestly, I was super done with mixing gas and oil or maintaining a gas-powered snow blower throughout the year. I was done with the hassle and lucky for me, a 21-inch Snow Joe was on sale. But could it keep up with our Utah winters?

Yes, yes it most definitely could and continues to do so.

The specific model I went for was a single-stage, corded electric Snow Joe that features a 21-inch intake. According to Snow Joe, its 15-amp motor is good for throwing up to 800 pounds of snow per minute at a maximum depth of 12 inches. The chute swings 180 degrees around for placing the outgoing snow wherever necessary, and the wheels make it easy for even rough terrain like my gravel driveway.

Everything seemed solid from the listing, though I was somewhat concerned that the extension cord might be a bit of a bear. But stepping up to a battery-electric snow blower would mean tacking on an additional couple hundred dollars. The slight annoyance wasn’t a dealbreaker, but what I found was that I rarely even think of the extension cord when using it, as the Snow Joe’s operation is supremely easy.

After that previously mentioned four-foot snow dump, we saw three other multi-foot snowfalls last season, along with a host of over 6-inch snows. And this year, we’ve already seen two 8-12 inch snows and one blizzard that brought 19 inches of snow. Each has seen me put on my jacket and head out into the snowy outdoors, putting the snow blower to use. And all have been plowed with ease.

Our driveway is about 30 yards long and 10 yards wide in most spots. All of it is gravel and it’s on a 10-degree incline. A single-stage thrower is usually not great for this type of situation, especially one without powered wheels. But the Snow Joe handles it exceptionally well. When we shoveled, it took my wife and I about three hours to get through the thickest of snow. The Snow Joe now only takes me about 15-30 minutes depending on the depth and how frequently I go out when it’s snowing hard.

One thing I really like about the Snow Joe is the extension cord holder mounted to the handle. This ensures it doesn’t get unplugged if you accidentally step on the cord or it gets snagged by a car tire. It’s also pretty lightweight, meaning you aren’t going to get tired by moving it around, even on a hill.

This Snow Joe also has a two-year warranty, which is pretty nice, and again, no maintenance. It’s literally just plug-and-go. No need for oil or grease or anything. It’s simple, easy, and stress-free, something that can’t be said of all the gas machines I’ve used in the past. The snow blower is also pretty quiet. There’s definitely noise from the 15-amp motor, but compared to the constant thrum and choke of a traditional snow blower, you’re saving your ears and your neighbors from calling the HOA on you.

Best of all, it isn’t expensive. At the time of writing, the 21-inch corded electric Snow Joe is priced at $159. That’s a screaming bargain. And though you’ll also need an extension cord meant for cold weather, it’s still better than shoveling.

However, I get that people might not want to deal with a cord. Based on my experience with the company’s corded model, I can’t see the battery pack versions being any less good. Just remember, if you want something similar to my 21-inch one, it’s going to be more expensive.

The post Snow Joe’s Electric Single-Stage Snow Blower Keeps Up Even With Utah Winters appeared first on The Drive.