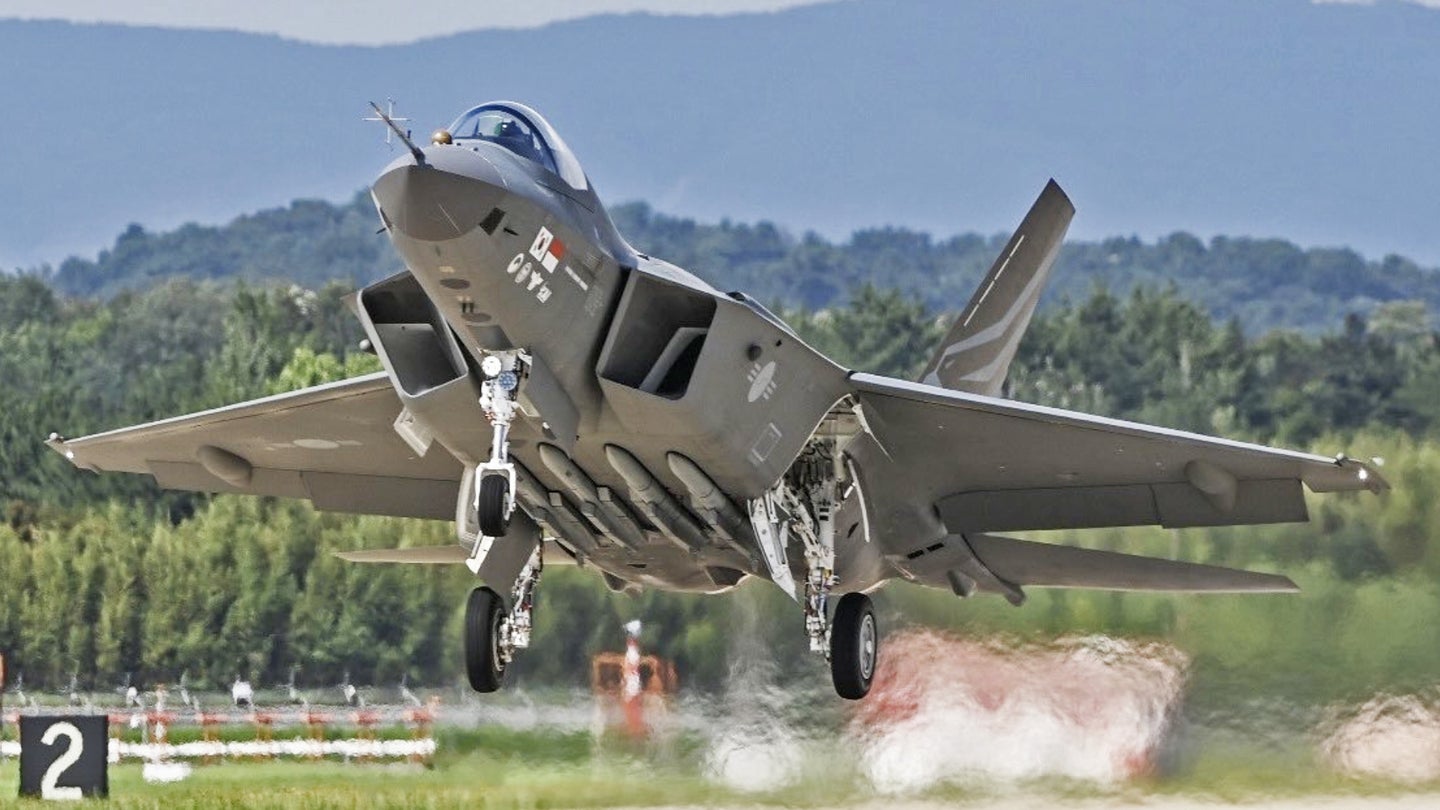 South Korea’s KF-21 locally-developed next-generation fighter flew for the first time today. It’s the latest and most significant milestone in what has been, so far, a remarkably rapid development program for a modern combat jet. The event comes only around two weeks after it first became clear that the KF-21 was undertaking ground tests under its own power, something that we reported on at the time.

The first prototype KF-21, named Boramae, meaning hawk in Korean, made its maiden flight from Sacheon Airport in the southeast of the country. While this is a civilian airport, it’s adjacent to the main Korea Aerospace Industries (KAI) production facility. It is also home to the 3rd Flying Training Wing of the Republic of Korea Air Force (ROKAF).

The KF-21, serial 001, took off at 3:40 PM local time, slightly delayed by weather, before landing at 4:13 PM. Flying as a chase plane to monitor the flight was another KAI product, a two-seat T-50 advanced jet trainer. The latter jet may have been from the 281st Test Flight Squadron that’s also based at Sacheon.

The prototype Boramae wore the flags of South Korea and junior partner Indonesia on the nose. Unusually for a first flight, the jet was also fitted with four mock-ups of the long-range Meteor air-to-air missile (AAM), carried in their semi-conformal location under the fuselage.

The KF-21’s first flight is broadly in accordance with previous, unconfirmed reports suggesting that this could take place as soon as July 22. Prior to the powered ground tests that were revealed at the beginning of this month, official videos had appeared in June showing the first prototype undergoing static engine tests, also at Sacheon.

Understandably, the KF-21’s first flight has been heralded by the South Korean media, with the Yonhap News agency reporting that the jet took to the air “around six and a half years after its mammoth development project kicked off despite skepticism over technological obstacles, cost-effectiveness and other feasibility questions.”

“As we got a step closer to the successful development of the homegrown fighter, this symbolizes a new leap in the domestic aviation technology and a rise of the strong high-tech military,” the Defense Acquisition Program Administration, or DAPA, which manages South Korean defense procurement, said in a statement.

Yonhap also provided a very useful potted history of the milestones in the development of the KF-21, or, as it was formerly known, KF-X:

DAPA describes the KF-21 as a “4.5-generation fighter jet,” which is a category that’s generally used to define the new or significantly modernized fighters that appeared from the 1990s onward. Compared to fifth-generation fighters, these typically lack key attributes including stealth as a primary design driver and advanced sensor fusion, among other attributes.

On the other hand, with the KF-21, South Korea has chosen a route very different to that which produced 4.5-generation fighters like the Super Hornet, Eurofighter Typhoon or Dassault Rafale, let alone the Russian MiG-35 or Su-35, which are really warmed-over designs from the 1970s.

Instead, the KF-21 is intended to follow a spiral development path from the outset, which will not only add new mission capabilities but also lead to a version of the jet with much more significant low-observable characteristics, including internal weapons carriage.

Even in its initial form, known as Block 1, the KF-21 will be equipped with an active electronically scanned array (AESA) radar and infrared search and track (IRST) to pick off aerial targets.

In taking this approach, Seoul appears to have cleverly found a way of avoiding the enormous costs and lengthy processes inherent in developing a true fifth-generation fighter from scratch. At the same time, the basic KF-21 promises to offer at least as much as rival 4.5-generation fighters, with all the benefits that come from homegrown production, to boot. Some would refer to it unofficially as a “4.75” generation fighter, with all this in mind. The total value of the KF-21 program is pegged at 8.8 trillion won, equivalent to $6.67 billion at the present rate of conversion.

Even if the Block 2 version still falls short of being a true fifth-generation stealth fighter, that might not be such an issue for South Korea either. After all, Seoul has already procured the F-35 that does fulfill these criteria and it is planning on buying more Joint Strike Fighters, too, including the short takeoff and vertical landing (STOVL) F-35B variant.

Seoul hopes to get the Block 1 version of the KF-21 into the hands of the ROKAF rapidly, another benefit of this type of program. KAI plans to manufacture the first series-production KF-21s between 2026 and 2028, allowing replacement of the ROKAF’s aging  F-4E Phantom II and F-5E/F Tiger II fighters.

By the time the full fleet of 120 Block 1 aircraft is deployed by 2032, under the current plans, work should be well underway on the more highly developed Block 2. Significantly, this will also be capable of air-to-ground missions. Marrying improved levels of low-observability with internally carried standoff air-to-ground weapons promises to make the KF-21 a powerful tool for penetrating air defenses to tackle key high-value targets in North Korea, for example. According to current plans, missions like these would also likely be flown in collaboration with, or at least supported by, homegrown stealth drones. The same thinking would likely also team the KF-21 with the F-35, where appropriate. You can read more about that concept here.

It’s interesting, too, that, at least to some degree, Seoul has been forced into taking a homegrown approach to developing a new-generation fighter. At one stage, it was expected that the United States would provide the AESA radar, IRST sensor, electro-optical targeting pod, and radio-frequency jammer for the KF-21. In 2015, U.S. government reportedly refused to share those technologies, leaving South Korea to go it alone. As a result, the country’s industries now have experience in developing these technologies and could potentially export them, too.

Other critical items will be provided by foreign suppliers, however. The KF-21 is powered by a pair of U.S.-supplied General Electric F414-GE-400K engines, which offer the benefit of being well-proven, with the reliability that comes from operations in different platforms with multiple operators around the world. Among the aircraft types that also use the F414 are the F/A-18E/F Super Hornet and JAS 39E/F Gripen.

Primary air-to-air armament will consist of the IRIS-T short-range weapon from the Germany-based Diehl company, as well as the aforementioned Meteor from the pan-European MBDA.

Establishing from scratch the capacity to produce reliable aircraft engines or air-to-air missiles is far from easy. It makes sense for Seoul to acquire these items off the shelf, especially when those missiles on offer are at least as capable, or perhaps even more than their U.S. counterparts.

At this stage, with one prototype flying and five more (of which four are two-seat variants) in advanced stages of production, it looks like Seoul’s decision to take a different route to forge a next-generation fighter might pay off.

However, there are still potential pitfalls ahead. The 2,000 or more sorties planned for the flight-test program will surely present some unexpected challenges and issues that need to be ironed out. Then there is the issue of Indonesia’s commitment to the program. Indonesia has a 20 percent stake in the first phase of the program and had been expected to buy 50 KF-21s. But payment delays coupled with procurement of other fighters — and interest in others — suggest that the country might not stay with the KF-21 for the long haul. That could leave a funding gap that Seoul would have to cover itself or otherwise find another international partner, although, with a promised price tag lower than that of the F-35, the KF-21 could be an attractive lower-cost (if also lower capability) alternative, especially to countries unable to buy into the Joint Strike Fighter program.

We look forward with interest to seeing how far the KF-21 goes in fulfilling its undoubted potential, with the ROKAF as well as on the export market.