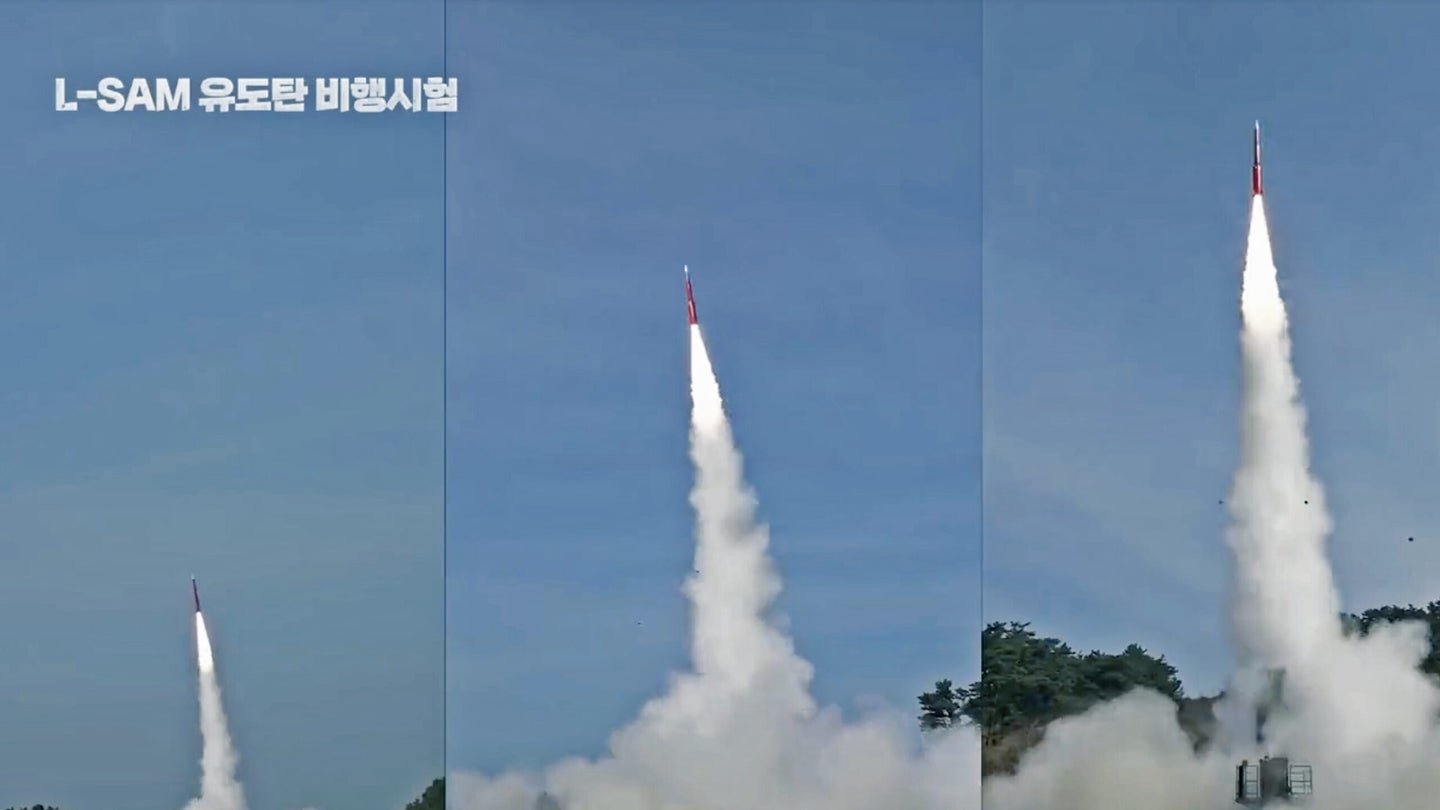 South Korea has completed a successful missile interception test involving its L-SAM surface-to-air missile system, apparently for the first time. The L-SAM, developed locally by the state-run Agency for Defense Development (ADD), is planned as a ‘high-end’ air defense system with significant anti-ballistic missile (ABM) capabilities. Reports of the latest test come a little less than three weeks after North Korea launched an unprecedented barrage of 23 missiles — the most ever fired in a single day.

The successful interception by the L-SAM was reported by South Korea’s Yonhap news agency, citing unnamed military officials, although no details were provided of when or where the test took place or what kind of target was destroyed. However, the same report states that “target missiles” (plural) were hit, suggesting multiple tests were undertaken, or perhaps some kind of multi-target engagement scenario.

The L-SAM, or Long-range Surface-to-Air Missile, is described by ADD as “a cutting-edge indigenous weapon system currently under development to defend against long-range/high-altitude aerial vehicles, providing multi-layered missile defense in combination with Cheongung II.” The latter weapon is also known as the M-SAM, or Medium-range Surface-to-Air Missile, which is already deployed and is optimized to destroy lower-tier ballistic missile threats.

Together, the L-SAM and M-SAM are intended to form part of South Korea’s layered air defense shield, collectively known as Korea Air and Missile Defense (KAMD). Other ABM-capable systems are available to South Korea as well, namely the U.S.-supplied Patriot PAC-3.

The L-SAM is able to tackle a range of different aerial threats, thanks to two different missile types, one for hitting aircraft and other air-breathing threats, and one to defeat ballistic missiles.

The missile used for anti-ballistic missile defense employs a kill vehicle equipped with a divert and attitude control system (DACS) to provide maneuvering during the terminal phase of the engagement.

Official video showing an earlier L-SAM test launch, as well as tests of the maneuvering DACS kill vehicle (from 0:27):

The kill vehicle interceptors are tailored to destroy high-speed ballistic targets at high altitudes: up to between 25 and 60 miles, according to reports, and are said to have a range of around 90 miles.

This puts the ABM version of the South Korean system in a broadly similar category to the U.S. Terminal High Altitude Area Defense (THAAD) system, also deployed in South Korea by the U.S. Army. However, THAAD is intended to destroy hostile missiles at greater range and altitude, between 90 and 120 miles. Like the L-SAM, THAAD uses a ‘hit-to-kill’ approach to destroy ballistic missiles during their terminal phase.

Meanwhile, the L-SAM’s anti-aircraft missile is expected to have a maximum engagement range of around 90 miles and is powered by a dual-pulse solid-propellant rocket motor. Despite North Korea’s vintage air force, recent reports suggest that it’s still able to put up significant formations of aircraft, at least for significant training events including live-fire drills. There is also the very real threat posed by low-flying North Korean aircraft infiltrating troops into the South, potentially in the run-up to hostilities.

Other components of the L-SAM system include a multifunction active electronically scanned array (AESA) radar for target acquisition and engagement, an information coordination central/engagement control station, and a missile transporter-erector-launcher (TEL). Each L-SAM battery is planned to include four truck-mounted TELs, two for the anti-aircraft and two for the anti-ballistic missiles. It will be fielded by the Republic of Korea Air Force (ROKAF).

The apparent first successful test flight of the L-SAM took place in February in Taean County, southwest of Seoul, and ADD plans to complete the development of the system by 2024. That should pave the way for series production beginning in 2026 and deployment of the system in 2027.

Approval for the full-scale development of the L-SAM came in 2019 in direct response to the rapid advanced being made in North Korea’s ballistic missile capabilities, as well as its nuclear weapons program. Indeed, there has been speculation that the introduction of the L-SAM could even be brought forward to help counter missile developments in the North. The L-SAM also seems to have considerable promise as an export product, with South Korea increasingly breaking into new arms markets. In particular, the availability of a single system that combines anti-aircraft and ABM capabilities could be very attractive, especially bearing in mind the kinds of threats that have been seen in the war in Ukraine.

However, the practicalities of bringing into service a fully functional ABM-capable air defense system are by no means easy to master. In the past, The War Zone has looked at the very real challenges of shooting down a ballistic missile.

Even an ABM system that has proven its worth in tests also only provides a degree of protection against a large-scale, high-volume attack, of the kind that would likely be launched by North Korea at the outbreak of a significant conflict on the peninsula. This, too, is an issue we have addressed in a previous article.

Clearly, however, the threat to South Korea is real and it’s also growing at an alarming rate. Following the missile and artillery barrage of November 2, which included a first ballistic missile across the de-facto maritime border with South Korea, the North fired an example of its Hwasong-17 intercontinental ballistic missile (ICBM) into the East Sea last Friday.

That South Korea is now busily working to get the L-SAM into service as part of a wide-ranging defensive umbrella to afford some degree of protection against ballistic missiles — and publicizing its efforts in that field — is hardly a surprise.

After all, 2022 has already seen more North Korean missile launches than any previous year.

With no sign that the current tensions on the Korean peninsula might calm down anytime soon, and especially with U.S. and wider international focus still firmly on the war in Ukraine and relations with China, it’s probable that Pyongyang’s missile tests will continue apace. And as long as that threat is maintained, South Korea will invest in more capable air defenses to keep pace and provide a better chance of defeating these missiles.