Spaceship-Like Electric Aircraft ‘Alice’ Has Flown For The First Time 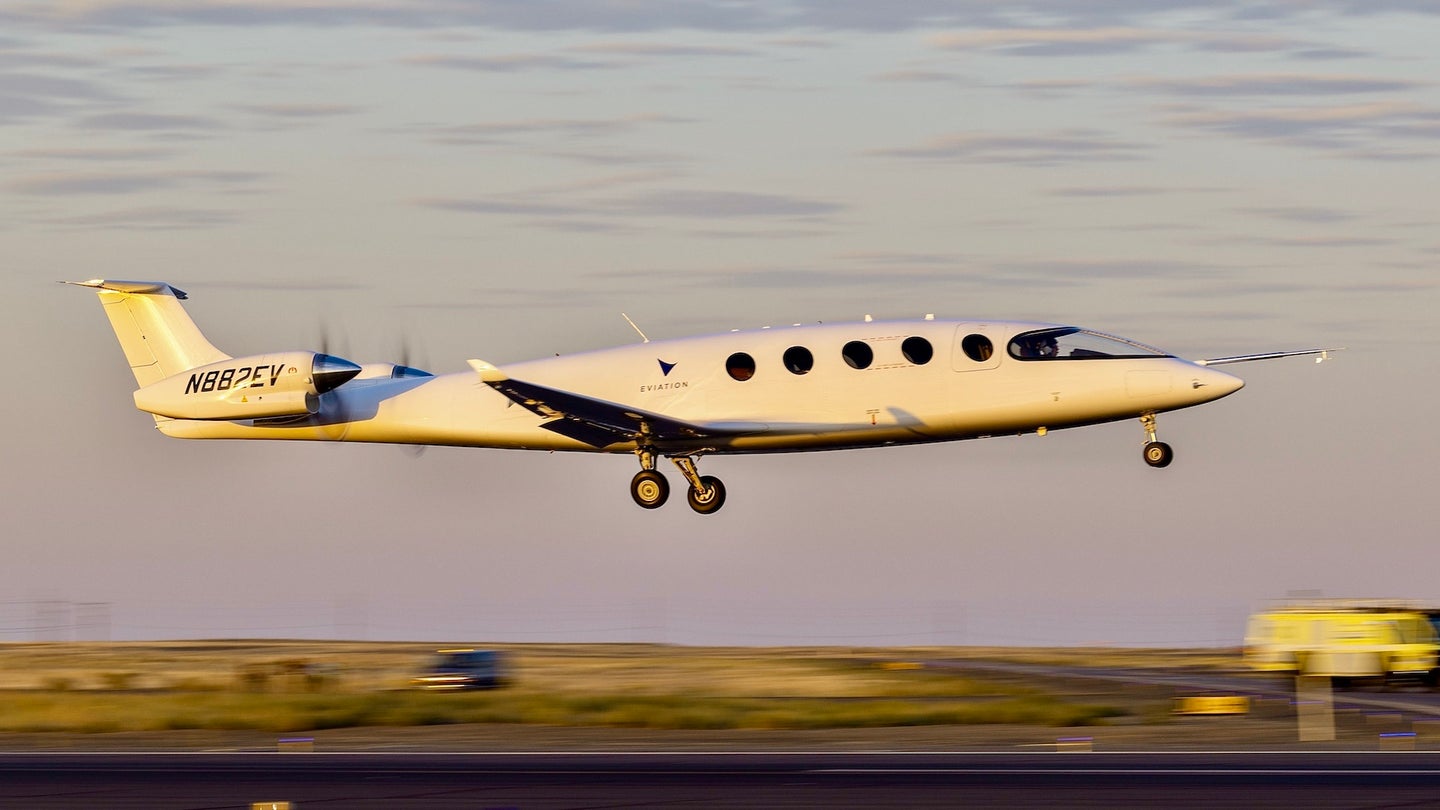 Eviation’s sleek ‘Alice’ aircraft, an all-electric plane, flew for the first time today. The aircraft’s first flight marks an important step forward for the Israeli startup, following months of ground testing and delays in getting the plane airborne. More broadly, Alice’s first flight has been hotly anticipated by those within the aviation industry, with Eviation branding it the “world’s first all-electric commuter aircraft.” You can read our previous profile on Alice here.

The aircraft’s first flight took place at Grant County International Airport (KMWH) in Moses Lake, Washington, on September 27. Alice was airborne at around 7:10 AM PST, and flew for approximately 9 minutes and 3 seconds at an altitude of around 3,500 feet. Eviation has been working with the aerospace engineering company AeroTEC for some time to deliver the aircraft, with tests being performed at AeroTEC’s Moses Lake facility.

“Today we embark on the next era of aviation – we have successfully electrified the skies with the unforgettable first flight of Alice. People now know what affordable, clean and sustainable aviation looks and sounds like for the first time in a fixed-wing, all-electric aircraft. This ground-breaking milestone will lead innovation in sustainable air travel, and shape both passenger and cargo travel in the future.”

Signs that Eviation was close to Alice’s first flight came several weeks ago, after the aircraft undertook a successful high-speed taxi rotation test at Moses Lake on September 18, 2022, which Eviation advertised in a short video released online.

Named after Lewis Carrol’s ‘Alice’ from Alice’s Adventures in Wonderland, the plane is designed to seat nine passengers and two pilots. After an early iteration was unveiled at the Paris Air Show back in 2019, the since refined airframe features a T-tail, high aspect ratio straight wings with winglets, and unique rear-mounted, front-facing propellers. According to Eviation, the aircraft is designed to fly at a maximum day range of 250 nautical miles, with a maximum cruise speed of 260 knots. An ‘executive’ configuration, with six seats, is also apparently in the works.

As The War Zone has previously reported, the all-electric aircraft is powered by high-energy-density batteries that feed two tail-mounted 640-kilowatt Magni650 motors manufactured by MagniX that push its five-bladed propellers.

Omer Bar-Yohay, Eviation’s previous CEO who remains on the company’s board, told flyingmag.com that the aircraft uses “the same kind of 21700 [Li-ion] battery cells that you can find in a Tesla or in a lot of cars that are out there today. If you look at the spec sheets we get roughly 270 to 260 watt-hours per kilogram at the cell level.” The battery itself “functions as a structural part of the aircraft, meaning the plane cannot fly without the battery there, from a load bearing perspective.” Bar-Yohay also revealed he hopes the plane will obtain FAA-type certification in time to enter service in 2025.

The journey to Alice’s first flight has been anything but smooth sailing. Alice’s inaugural flight had been expected to take place in late 2021, but several factors pushed this into 2022, according to the company. These included poor weather conditions, the impact of the COVID-19 pandemic, and leadership changes at the top of Eviation with Bar-Yohay’s departure as CEO. Technological challenges of such an ambitious design are also omnipresent.

Back in December 2021, the aircraft underwent engine testing at Arlington Municipal Airport (KAWO), north of Seattle, in anticipation of its first flight, while taxi tests were also performed. By January 2022, Bar-Yohay anticipated that the plane was on track to take to the skies within weeks following the completion of additional ground-based tests. These were not altogether successful. During a taxi test on January 28, 2022, the plane experienced a runway excursion that sent it a few hundred feet off the runway.

Lee Human, President and CEO of AeroTEC, told The Seattle Times the following in July, 2022:

“We finalized the design work [for Alice] a year ago. There are a lot of new technologies being applied to the aircraft. And yeah, there’s been some serious teething pains in integrating these technologies to make them work.”

The aircraft’s potential to revolutionize the aviation industry in the near term is reflected in Eviation’s recent commercial success. Global Crossing Airlines (GlobalX) recently signed a letter of intent (LOI) with Eviation for 50 Alice aircraft, with deliveries provisionally beginning in 2027. The Chair and CEO of GlobalX, Ed Wegel, stated:

“Eviation’s Alice aircraft is setting the standard in sustainable aviation, and we plan to offer the aircraft to our cruise line, tour operators, leisure travel providers, and business clients with a need for short-haul charter flights across Florida.”

Moreover, back in April 2022, the commuter-giant Cape Air also signed a LOI with Eviation for 75 Alice aircraft, with the aim of advancing “sustainability, growth, and innovation.”

You can read more about how Alice could help usher in a new era of battery-powered aviation in our past writeup on the aircraft. But that is still a long way off. Alice has so much to prove, but just the fact that it has flown is a major milestone in aviation history.

The post Spaceship-Like Electric Aircraft ‘Alice’ Has Flown For The First Time appeared first on The Drive.