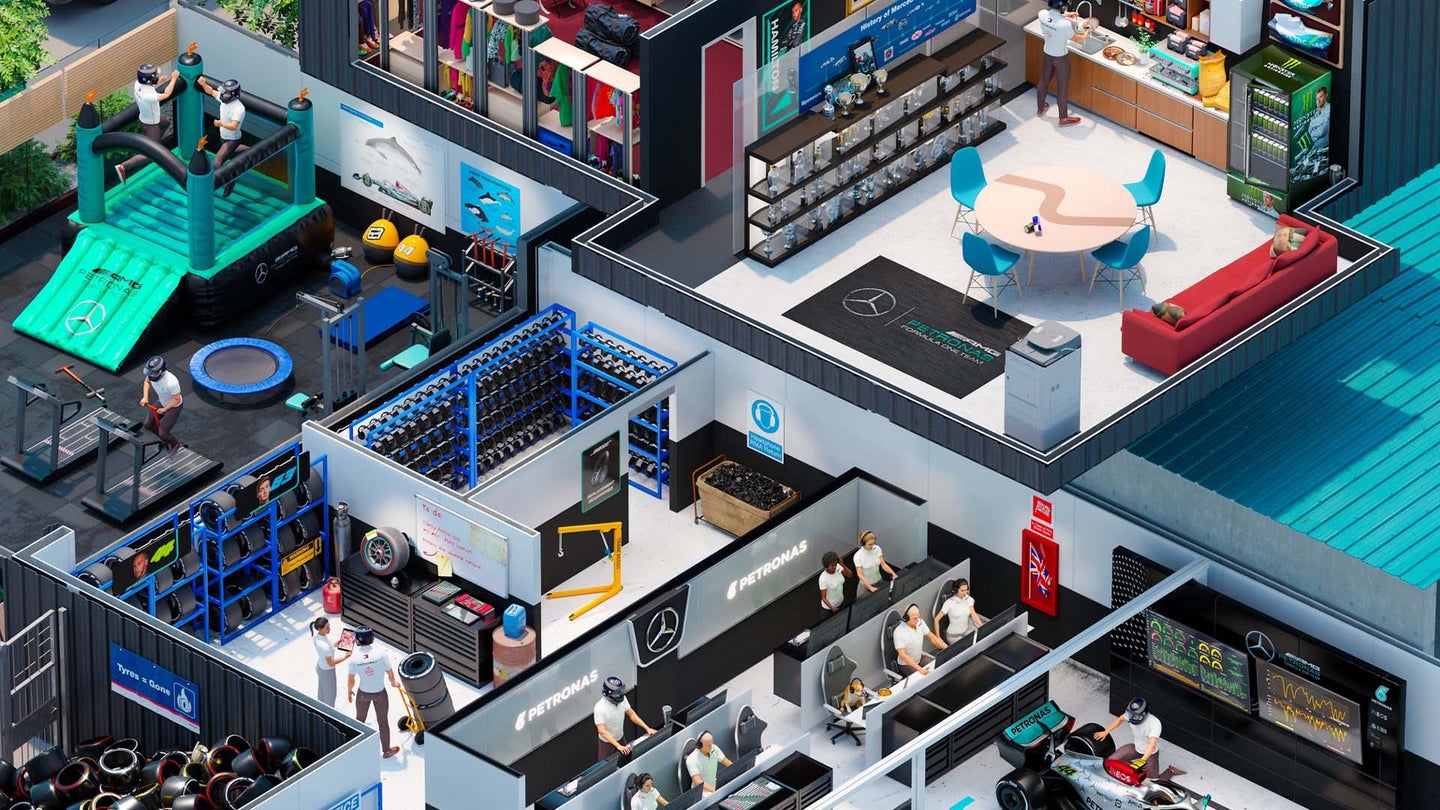 A closet full of hype-worthy ‘fits, a room full of bouncy gear with porpoise posters, and a bulldog analyzing team data? Why, it must be time to roast the Mercedes Formula 1 team.

Richard Parry, the digital artist behind that clever viral answer to Queen Elizabeth II’s long viewing line, has made another fun parody of an F1 team’s garage. This time, it’s Mercedes’ turn, right down to the merry band of misfits waiting to do a tire change.

After Parry’s Ferrari parody got shared far and wide, he decided to make this a series, first highlighting some of the 2022 season’s kookiest events in a clever cutaway illustration of every garage. Parry says each piece takes about a month to draw up in the 3D software program Blender, and each one is chock-full of clever Easter eggs to stare at for a while. He won’t be able to get all of the teams done by the end of the year, but he did confirm to The Drive that Red Bull is up next.

It’s Mercedes’ turn now, though, and unfortunately, this year hasn’t gone so well. Mercedes enjoyed a streak of pure dominance and multiple world driver’s and constructor’s championships with the last “formula” for F1 cars. However, they’ve struggled with the switch to Formula 1’s latest car spec, especially with porpoising, where the car moves up and down in a violent, tough-to-control manner. Naturally, that inspired one of the back rooms of this garage. If the car bounces up and down, why wouldn’t the rest of the team?

Parry’s favorite piece—and mine, too—is Lewis Hamilton’s dressing room, which includes everything from a motivational “hang in there” poster to a full knight’s suit of armor and such an exhaustive collection of drip that even a faucet might be jealous.

“My favorite part working on this edition was working on Lewis’s wardrobe,” Parry told The Drive via email. “I took a deep dive back through Lewis’s paddock arrival outfits and 3D-modeled clothing based on them. It took absolutely ages, but I think the effect is a real focal point of the image. He’s a very trendy guy!”

The collection of unused sidepods and charming Toto throw pillows are nice touches, too. It doesn’t surprise me one bit to spot a Red Bull can that’s snuck back in the garage, either. Lewis Hamilton himself enjoyed seeing his bulldog Roscoe hard at work. What’s your favorite part?

There are far too many copyrighted logos to sell posters, so these will remain fan works for now. However, you can download a full-res copy of this month’s Merc poster for your own use here, and keep up with Parry’s latest works here on Twitter or Instagram.

The post Spend Forever Spotting the Hilarious Details in This Mercedes F1 Garage Parody appeared first on The Drive.