Stories From The Eyes In The Sky On 9/11 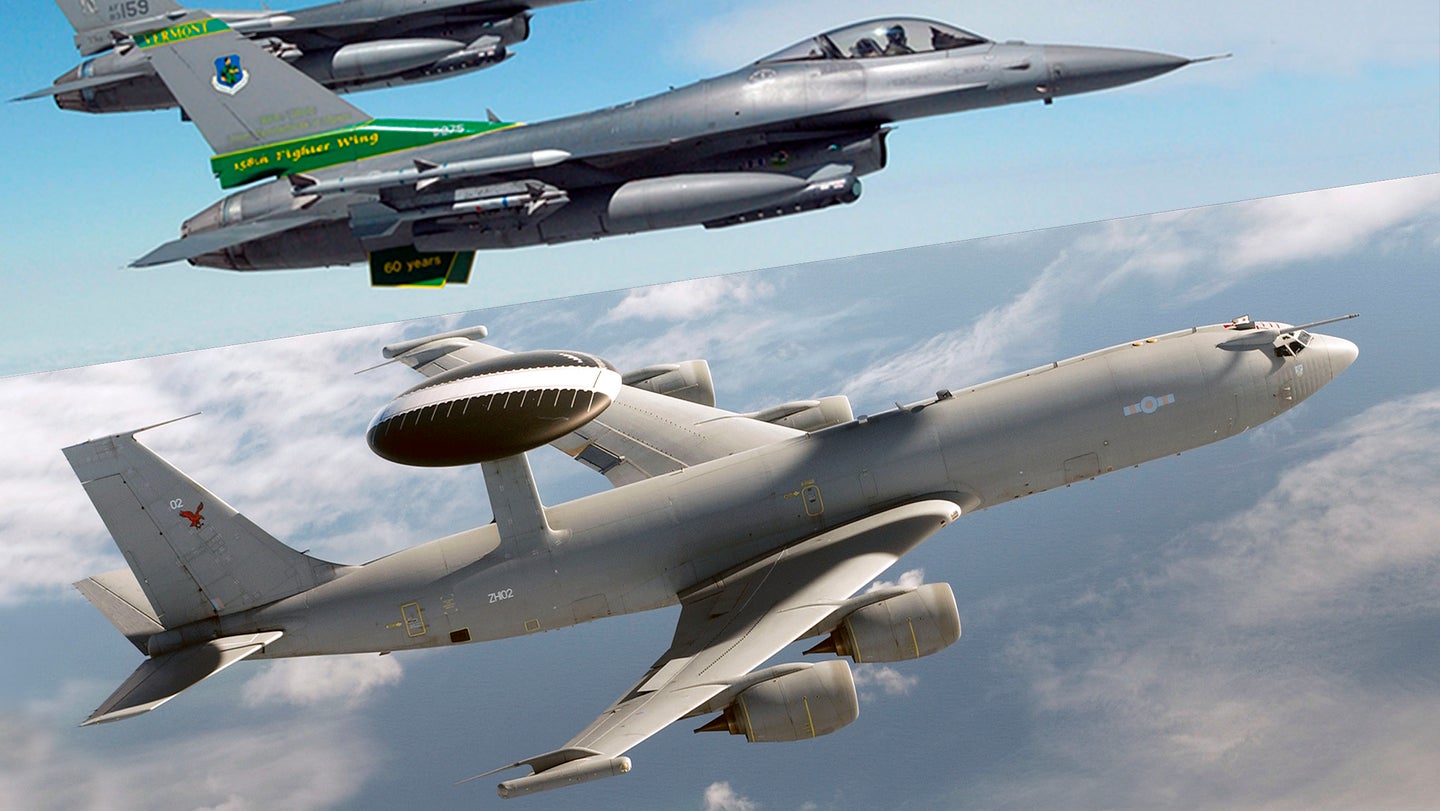 On the 21st anniversary of the tragic and world-altering events of 9/11, we look to two unique perspectives, separated by thousands of miles, of those who were in the air in the aftermath of the terror attacks.

Simon Radley had only been a member of the Royal Air Force’s E-3D Sentry force for four months when the events of September 11 began to unfold. A Communications Operator, Simon worked alongside a Communications Technician to process all messages coming to and going from the rotating-radar-toting airborne early warning aircraft.

The day started as a routine training sortie over southwest England, coordinating low-flying aircraft performing simulated missile attacks on Royal Navy warships. Simon’s aircraft arrived over the Cornish Coast at 0830 ready for the start of the exercise, which ran smoothly until approximately 1100 when an urgent request came through: “We had a message telling us we were being re-tasked and were to proceed at medium level towards Northumberland to rendezvous with a VC-10 tanker.”

The crew was instructed to fill the aircraft’s tanks, taking on around 80,000lbs of fuel, which meant one thing: “A long day ahead!”

After refueling, the aircraft was vectored towards Prestwick, Scotland and then out into the north Atlantic to around 20 degrees west latitude. During the transit, Simon tuned his radio to listen to BBC News and began piecing together the events unfolding in New York.

At around 1300 the crew was ordered to contact every westward-bound civilian aircraft which had yet to reach 30 west (the geographic halfway point across the Atlantic) and instruct them to turn around. Eastbound aircraft, which had no option but to continue towards Europe, were also instructed to land, these aircraft taking priority owing to their lower fuel loads.

Figuring out where to land these aircraft proved to be “A bit of a jigsaw puzzle,” as Simon and the crew coordinated with airports across the UK to work out how much tarmac space they had. Of course, as photographs of the day show, any usable space was utilized to park diverted airliners.

With London’s airspace locked down and air defenses on high alert, it was imperative that civilian pilots follow instructions precisely to avoid a disastrous shoot-down. It wasn’t always the case with a handful of commercial crews wanting to continue until they had instructions from their companies. For those more “tricky” aircraft, Simon and his crew would vector fully-armed RAF Tornado F3 fighters to intercept: “You stick two fighters on the wing and you’ll get people asking what’s going on. That got their attention!”

After five hours on task, the skies were starting to clear. Rather than attempt a handover to a new E-3 crew, Simon’s aircraft met its second VC-10 tanker of the day. The aircraft might have been refueled but the crew certainly wasn’t.

By now they had eaten their onboard rations and even the toilet was full. In all, Simon’s crew managed approximately 250 airliners in a sortie lasting 15 hours, 35 minutes: “We were the last piece of metal flying in the UK and on the radar there was not a single blip, even looking out into Europe there was nothing.”

The day was a real baptism by fire for Simon who a little over two months later was in Oman, regularly flying 15-hour missions in support of operations in Afghanistan.

Colonel Dan “Gump” Finnegan, a pilot with the 134th Fighter Squadron, Vermont Air National Guard, was preparing for just another typical day in the office when word broke something had happened in New York.

“I was mission planning for an afternoon sortie with our then Squadron Commander when the squadron Intelligence Officer came in and said an aircraft had hit the World Trade Center. We thought it was just a GA (General Aviation) aircraft and that hopefully not too many people were hurt.”

Ground crews and armorers took preemptive action and started moving air-to-air weapons out of their storage bunkers and preparing them for flight, though no live weapons could be physically loaded onto the Squadron’s F-16s until permission was granted.

With no idea of how long the attacks would last it was important to have a pool of rested pilots available to fly. Finnegan was sent home and returned to the Squadron later that evening. “I came back in around 11pm, airborne shortly thereafter, and was flying over ground zero in the early hours of September 12th before the sun rose.”

The 134th FS routinely operate in and transit through New York airspace and is accustomed to the high density of air traffic. However, Finnegan wasn’t prepared for the near radio silence and absence of commercial traffic as he approached the city: “It was eerie to look outside and not see airplanes or listen on the radio and not to hear anybody. It was really strange.”

Gump recalls arriving over Ground Zero and gazing down at the first responders and their vehicles through his night-vision goggles (NVGs) and watching the fires burning using the newly delivered LITENING infra-red targeting pod. “I had an empty feeling up there, feeling so isolated and wanting to help. Of course, we had to make sure the airspace was safe so that they [the first responders] could do their part.”

For the next 20 years, F-16s would perform a role during Operations Enduring Freedom and Iraqi Freedom that was alike in some ways: “That role was very similar, we were protecting troops on the ground so they could do their job. It’s different when it’s in our own country and they are truly civilians.”

Missions over the site would last between four and five hours ensuring a continuous air-to-air equipped presence in place to react in the fastest time possible. Finnegan also remembered the weather the days following the event being unusually clear, white smoke climbing up to 18,000ft serving as a somber beacon for crews to navigate by.

While the nation was reeling in shock, the military was getting to work. Finnegan said: “When a curveball like 9/11 is thrown people either sit wide-eyed or jump into action, and that’s exactly what we did.” Nearly continuous combat air patrols continued to be flown across the United States for the next three-to-four months as commercial air traffic gradually began to resume.

Although the USAF did have procedures in place to respond to unresponsive or uncooperative airliners, the threat facing the U.S. during and after 9/11 was a different animal. As a result, tactics to deal with a potential second wave of hijacked airliners were developed “on the fly.” Of course, intercepting and engaging an aircraft full of civilians is most fighter pilots’ worst nightmare but it was now something Gump and his colleagues had to prepare for: “The command and control mechanism and using weapons systems against airliners took time to get used to. It tears at someone who might have to press the pickle button, it’s something no one wants to do” said Finnegan.

Gump is rightfully very proud of how his squadron responded and adapted to their new mission, working 12 hours on, 12 hours off in a high-strung environment without complaint. Despite challenging winter conditions, some of which prevented other east coast squadrons from flying their CAP missions, favorable weather meant the 134th was able to continue flying. This continued for 122 days without a break until March 2002 when the squadron’s 24/7 operation reverted back to a typical working week.

Still, nothing really returned back to normal as America’s homeland air defense posture and mission were forever altered after that tragic day.

The post Stories From The Eyes In The Sky On 9/11 appeared first on The Drive.